Last night, something amazing happened. After nearly six months of waiting for it, Verizon finally delivered the Samsung Galaxy Nexus Android 4.0.4 update to my device. I have spent today messing around with my new piece of software and I wanted to share my first impressions of the update.

First though, a little bit of a back story.

For those that don’t know, I bought the Samsung Galaxy Nexus on launch day in December to replace my iPhone 3GS. However, my experience with the phone was plagued with bugs. It got so bad after the new year that I decided to start using my iPhone 3GS as my daily driver once again.

I then started writing about my issues and discovered that I was not alone, that many other Galaxy Nexus owners on Verizon were experiencing the same problems.

Random reboots, microphone issues, poor battery life, crashes, sluggishness, and connection issues where I seemingly lost connection for no reason in areas where I had had good reception before.

So, I figured that an update would roll out in a timely manner, this is a Nexus device after all, and I would soon blow off the dust and go back to my Android phone.

Unfortunately, Verizon had different plans and decided to make us Galaxy Nexus owners wait more than five months for a bug fix update. And personally, I had to wait several days after the initial roll out date to see the software arrive, days that seemed to go slower than normal. 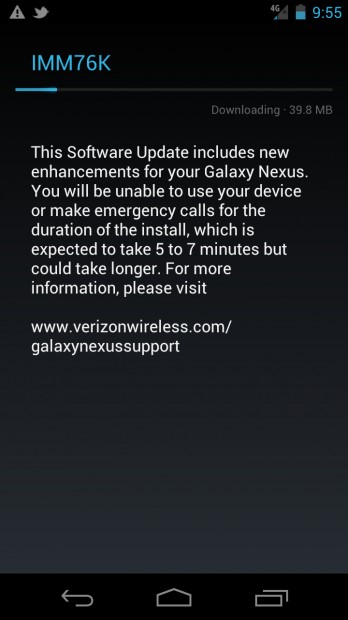 Last night though, my pleas were answered and Verizon delivered the Android 4.0.4 IMM76K update to my phone. I was both excited and nervous. Excited because the software finally arrived, nervous because I have been hearing mixed things about the update.

Some owners have been claiming that the issues have been taken care of, some have said that some are persisting, even with the new software.

It didn’t help that Verizon left some big fixes off of the changelog either. 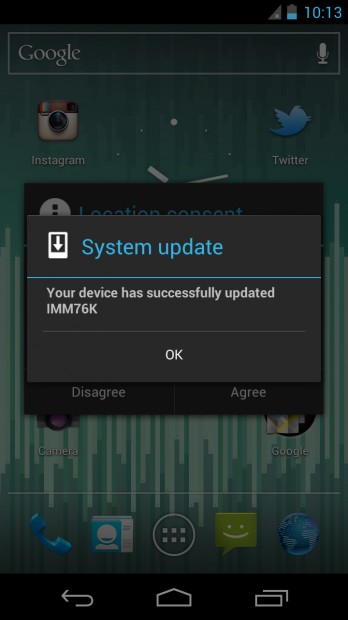 So after about 20 minutes – Verizon says 5-7 minutes – the update downloaded, installed itself and my phone was up and running on Android 4.0.4. Finally, after five months of waiting and moaning for Verizon to do something, my update had arrived.

Almost immediately, I got the sense that things had changed for the better. The phone itself just seemed, snappier. I immediately attributed this to my excitement but no, after playing around with it extensively today, I can say that I haven’t experienced the same sluggishness that I found before.

Surprisingly, this actually sums up my experience with Android 4.0.4 on my Galaxy Nexus. I keep waiting for things to go wrong but they don’t.

So far, I haven’t experienced a single reboot of my phone. I can’t tell you how nice that is. There were times, recently, where my phone was rebooting itself three times in one day.

This is going to sound crazy but I think my battery life has actually improved. Before, my phone would just drain like crazy, especially when it was in standby, but my charge is holding steady today and I have high hopes for the future. 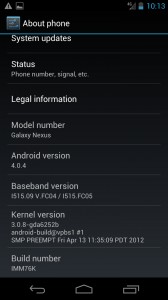 I have yet to encounter the microphone issue that I ran into several times when making a phone call. My microphone has yet to cut out when talking on the phone.

Additionally, I have yet to run into any of the trade-off issues whether its cellular to cellular to Wi-Fi to cellular. Often I would have to flip connectivity on or off or put my phone into Airplane Mode as a quick fix. It looks like Verizon fixed that issue.

I also haven’t had a crash or freeze yet. Once in awhile, I would enter the native Camera or Music apps and my phone would go bonkers. That, fortunately, has not happened yet.

My only complaint in the few hours that I’ve had my Galaxy Nexus on Android 4.0.4 is that the volume is still much to low for my tastes. I’ll live but it’s still an annoyance.

Clearly, Verizon did its homework in the five months that it had to fix all of the issues that were on board the Galaxy Nexus. Honestly, this feels like a vastly different phone. Now, it’s too early to crown the update because it has been less than a day but so far so good.

After spending more time with it, I will return with my final thoughts about the software and about whether  I have once again replaced my iPhone.

I know I’m not the only one that has success with the update and I’ve heard from several people that are still experiencing issues. Saying that, I’d love to hear about your experiences thus far with the update.

I really want to say that it made the five month wait worth it but let’s be honest, that’s ridiculous.