Last week, I told you that I had yet to receive the Verizon Samsung Galaxy Nexus update, you know, the update that takes the device to Android 4.0.4 and seems to iron out a lot of the issues that the device has had since it launched in December of 2011. It’s now Monday, the weekend has passed and I still don’t have an update.

Needless to say, I’m pretty frustrated. That’s partly because I don’t have the update but it’s also because I don’t understand what is taking Verizon so long to roll this update out to owners.

It also doesn’t help that I haven’t been able to manually update like many others.

I know several Galaxy Nexus owners and the majority have not yet received the update. It has been almost five days since it apparently started rolling out. 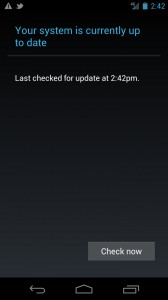 That would be acceptable if it were a major Android update, you know, like Android 4.1 Jelly Bean for instance.

But this is a bug fix update and I have no clue why the process is taking so long. I’ve seen Android 4.0 updates roll out faster than this.

Not helping is the fact that I have new-found optimism in the software and the fixes that it promises to bring to my device. I’ve heard from several Galaxy Nexus owners who say that the software has eliminated many of the device’s issues.

Yeah, there seem to be a few issues remaining for some owners but for the most part, I’m hearing good things.

So, as you might imagine, the last few days have been absolute torture for me and with Verizon being Verizon, I still have absolutely no idea about when I might expect to receive the update.

Is anyone else out there still waiting now that the weekend is over or am I the only one? I’m really hoping it’s not the latter.