Last week, a rumor emerged suggesting that the HTC M7 launch would miss Verizon, at least at the beginning. A new leak though suggests that Verizon may have something on the way and based on the specifications, it’s looking like it could be the Verizon HTC M7.

The HTC M7, HTC’s rumored flagship, is rumored to be launching on February 19th. And while previous rumors suggested all four major U.S. carriers might see the device at launch, a more recent report claimed otherwise. Evidently, AT&T, Sprint and T-Mobile will be launch partners for the HTC M7, but not Verizon Wireless.

It could be that Verizon thinks the device’s launch will come too close to the Droid DNA’s which arrived back in November but as of right now, nothing is certain as HTC has yet to confirm any of the carriers, despite seemingly already confirming the HTC M7 itself. It appears though that something is on its way to Verizon, something that looks an awful lot like the HTC M7.

Noted HTC leakster and developer @LlabTooFeR (originally known as Football4PDA), has leaked a spec sheet that shows what appears to be a device called the DLXPlus. The specifications are nearly identical to the HTC M7 and it could mean that this device will represent not only the Verizon HTC M7 but the successor to the Droid DNA, Verizon’s current 1080p device. 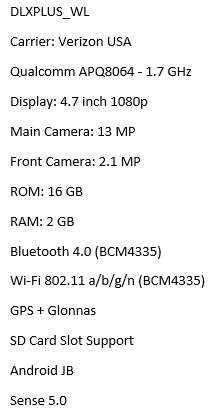 These specs could be for the Verizon HTC M7.

The spec sheet includes mentions of a 4.7-inch 1080p display, 16GB of internal storage, Android Jelly Bean, Sense 5.0, and a 13MP camera, all rumored features of the HTC M7. The camera though is thought to incorporate Ultrapixel technology with three 4.3-megapixel sensors attached to it.

Unfortunately, the leak does not contain any specifics about the device’s release date. The HTC M7 is thought to be launching on February 19th and coming to shelves as soon as early March. It’s unclear how long it will take to arrive on shelves in the U.S. but history indicates that it could be a few weeks after the rest of the world gets it.