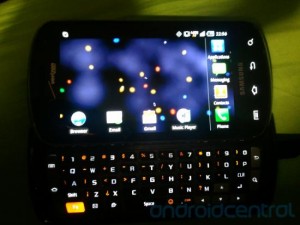 Another image of the Sprint Epic 4G Android smartphone is seen with Verizon Wireless branding, 4G LTE support instead of Sprint’s WiMax networking, and the Android operating system. The look of the handset from preliminary leaked images suggest that this device will continue Samsung’s Galaxy S 1’s lineage rather than be a branded variant of the Galaxy S II, which is still yet to launch in the U.S.

Given that early leaked images of the Sprint Samsung Within, a Galaxy S II variant, depicted a slate-inspired handset sans keyboard, it appears that Samsung may not offer a keyboarded version of its second edition Galaxy S line; the Samsung Epic 4G remains the sole keyboarded Galaxy S 1 variant and if true the Verizon version may be the second.

If Verizon launches this version of the Epic slider, the carrier will essentially have four variants of the original Galaxy S 1 smartphone; this model will join the Verizon Fascinate as well as the Continuum in addition to the newly launched Droid Charge 4G LTE handset. Specs-wise, the device will most likely be a keyboarded version of the Droid Charge, which is also a 4G LTE smartphone and supports the same 1.0 GHz single-core Hummingbird processor found on the Galaxy S models.

Right now, if the keyboarded Epic 4G LTE slider is launching with Galaxy S 1 specs, it seems that the ultimate device on Verizon’s network will either have to be a 4G LTE equipped Galaxy S II–when and if that phone launches–and the Motorola Droid Bionic. The Droid Bionic will have some advanced specs, including dual-core chip support, a high resolution qHD display that potentially can measure up to 4.5-inch, and ample 1 GB RAM for multi-tasking.