Apple’s latest iPhone feature is Siri. What is Siri, you ask? Funny you ask that way.

Siri is a new app that will be included with the iPhone 4S. This app is a new way to control your phone with your voice. Instead of just dictating a message to your phone, you can ask your iPhone to do stuff for you.

Siri is no Joan from Mad Men, she isn’t going to cook you dinner like Alice on the Brady Bunch, and you can be sure that she won’t help you to your Batcave, but she can do some amazing things anyway.

Siri can take action based on what you say, and isn’t limited to a small set of specific keywords to do what you ask.

Apple is able to take voice control to a new level by using Artificial Intelligence. Siri’s artificial intelligence lets the app place your request in context and make smarter decisions about what you are trying to do.

Siri sounds like science fiction, but it’s coming to your pocket on October 14th.

How Does Siri Work?

When you launch Siri, which you can just call your assistant if Siri sounds weird, you can ask it to do something and get the results read back to you by a robotic sounding female voice.

Here’s a video showing off several off the cool things you can use Siri for to simplify your life.

If you notice, the users don’t have to get specific about who or what they want. The male says to text his wife, and it does, no need to use her full name. Same with traffic, your iPhone already knows where you are, so why should you need to give it your current location?

Siri can also read you your text messages, and allow you to respond with your voice so that you don’t have to stop doing whatever you are doing to type a reply.

What Can Siri Do? 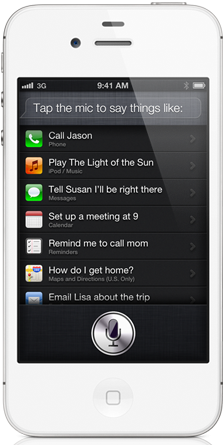 What Can Siri Do?

Siri can control many functions of your iPhone, including the new Reminders App, which is able to remind you to do things based on your location. This allows you to use Siri to remind you to grab something when you get home, or to do something as soon as you get to work.

Here are just a few of the things you can ask Siri to do,

These actions allow you to do many things, and because Siri understands, you can ask just like you would ask a friend or a real assistant.

Apple offers up a few examples of Siri’s understanding,

“Any good burger joints around here?” Siri will reply “I found a number of burger restaurants near you.” Then you can say “Hmm. How about tacos?” Siri remembers that you just asked about restaurants, so it will look for Mexican restaurants in the neighborhood. And Siri is proactive, so it will question you until it finds what you’re looking for.

One of my favorite uses is to set a reminder in the Reminders App that is a part of iOS 5. If you need to set a reminder, but don’t want to be bothered with it until you get to a specific place, Siri can put that into the reminder.

Watch the iPhone 4S demo below, which shows off a user setting a reminder for when he gets home. As soon as he pulls in the driveway, he is reminded to grab a gift.

How Do I Get Siri?

Apple’s new personal assistant app is part of iOS 5, but it is only available on the iPhone 4S.

The iPhone 4S also includes a faster processor, better 8MP camera that can record in 1080P with video stabilization and impressive pictures as well as AirPlay Mirroring to wirelessly stream to an Apple TV.