Apple’s new iPhone 5 is stirring the mobile pot beyond the Apple community. Here’s how many Android-centric sites are reacting to the iPhone 5 news.

While many GottaBeMobile contributors carry both Android and iOS devices, contributors to the the following Android sites wouldn’t be caught dead carrying an iPhone. Did Apple do enough to win over Android fans? If this sampling is even close to representing the Android fan base the answer is a resounding NO.

Over at Droid Life they compared the iPhone 5 to a few popular Android phones including the Samsung Galaxy S III, the HTC One X and the Motorola Droid RAZR HD. 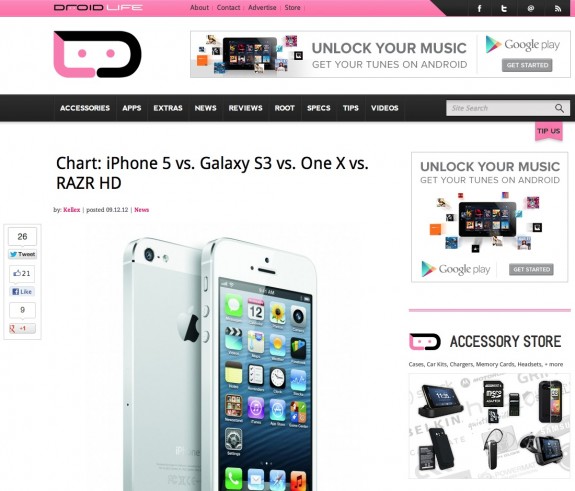 The site offered primarily a spec comparison between the devices showing that it doesn’t offers as much memory as the Samsung Galaxy S3, 1GB for the iPhone 5 compared to 2GB for the S3. Also the iPhone 5 gives uses more choice of built-in storage with three options ranging from 16 to 64 GB while the other 3 phones only offer one or two maxing out at 32GB. They noted that the iPhone 5 doesn’t include an expansion slot for micro-SD while two of three Android phones do. Only the One X doesn’t.

At Phandroid, the site took a poll asking readers if they plan to switch from their Android phone to the iPhone 5. As one would expect for a site catering to Android “phans” the poll results show that nearly 87% plan to stay with their Android device. Almost ten percent will change if they get the features they prefer while about 4 percent certainly will jump ship.

Phandroid also posted what they called a “crass, offensive and right on the mark” iPhone 5 parody video. It shows Steve Jobs resurrected as he raps about the new phone after Tim Cook declares Apple is all his. 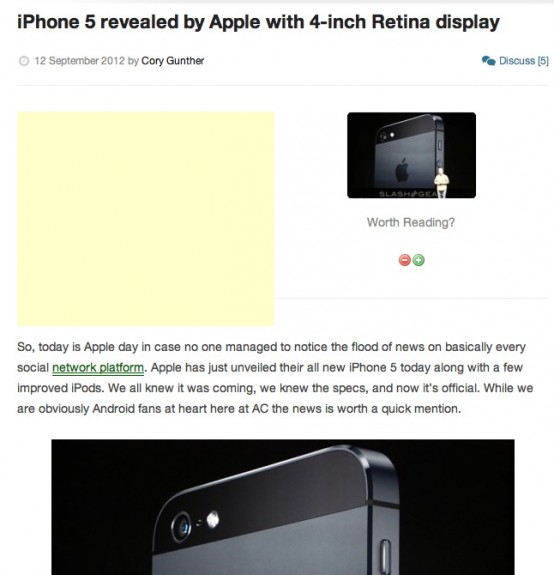 At Android Community the reluctantly covered the news about the iPhone 5 saying “We have to give them a little coverage.” They went on to share a few details and concluded their post in this way:

An Android fan might go through the device’s specifications and find nothing entirely new here. Yes Apple has an ecosystem that is wide, powerful, and still flourishing but everything we saw today has been available on Android for the better part of the past year or more. We don’t want to get the trolls started but feel free to drop us a few “friendly” comments in the comment box below with your thoughts, comments, or concerns.

Android Police decided to compare the new iPhone to the latest Android makers have to offer. They mentioned the size of the display and pointed out that a taller iPhone doesn’t really give users an effectively bigger display since the content on the screen won’t increase much if at all. 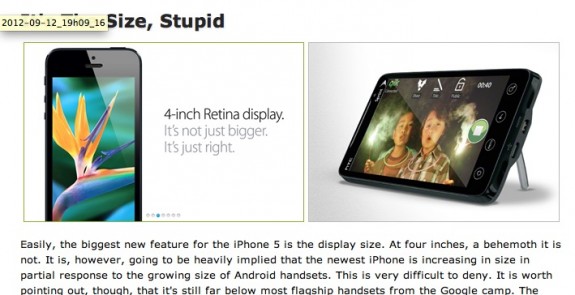 The post then goes on to compare how the new iPhone adds features already mostly present in Android including navigation built into the Maps app, a more useful Siri and Passbook that brings Google Wallet style commerce only without the NFC that some Android phones include making it possible to pay for goods and services by waving a phone over a payment terminal next to a cash register. 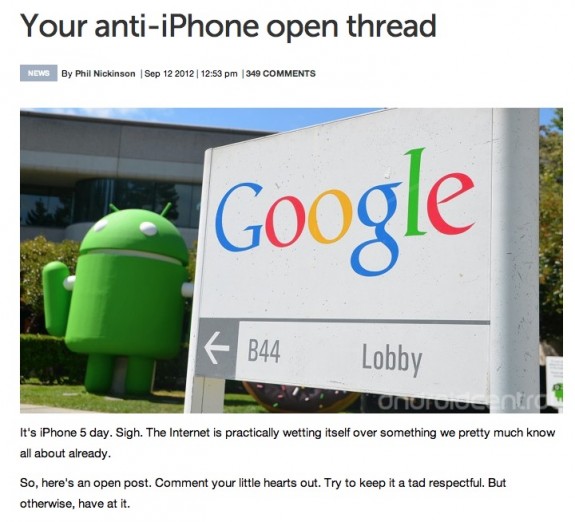 Probably the most enjoyable Apple related post on an Android site comes from Android Central where they offered a post solely for the purposes of letting Android fans vent and share anti-Apple comments. The post reads:

It’s iPhone 5 day. Sigh. The Internet is practically wetting itself over something we pretty much know all about already.

So, here’s an open post. Comment your little hearts out. Try to keep it a tad respectful. But otherwise, have at it.

As of this post it thread shows 349 comments. The first one saying, “Wake me up if it will do anything an ICS or JB Android phone can’t do.”

One site was silent about the new iPhone. XDA Developers posted nothing about the news at all as of the night after the Apple event.