If you’re rushing to find some solar eclipse glasses before Monday’s astronomical event we have some bad news. You are going to have a hard time finding a pair of safe and certified glasses in stock. Most of the NASA-approved retailers like Home Depot, Lowe’s or Walmart have sold out.

However, those aren’t your only options. You can head into a local Library, Barnes & Noble or a few other locations and hopefully get a pair. Read on for more details on where and how to find solar eclipse glasses. We’ll also explain how to tell if your glasses are safe, or if they’re fake.

Read: How to Take Pictures of the Solar Eclipse with Your Phone

Looking at the 2017 solar eclipse is risky. Even if you’re in the path where the moon completely blocks the sun, it only takes a few seconds to cause permanent damage. That’s why millions of people are searching for glasses. Whether that’s a $2 pair of cardboard glasses or the $15-20 plastic ones.

The 2017 Solar Eclipse will take over the sky starting Monday, August 21st. Meaning you only have a few days left to find some glasses and enjoy the moment.

Where to Find Solar Eclipse Glasses

First things first, you’ll want to go to a local Library to see if they have any left. Between NASA, Google and a few others over 2 million ISO-compliant glasses are available for FREE. Here’s an official statement.

“With support from NASA, Google, and the Gordon and Betty Moore Foundation, the Space Science Institute’s STAR_Net initiative has distributed more than 2 million ISO-compliant safe solar eclipse glasses to more than 6,900 libraries all across the US” — American Astronomical Society

The two Libraries closest to me were completely out of the free glasses, and one was selling some for $2 each. You’ll simply need to call or drive around and hopefully find some that are still available. Here is a list of participating libraries.

Then, as we said above, there are a lot of different places to try your luck. Most stores are likely out of stock, but we’ve been told by countless big-box retailers that they should have more starting Friday, August 18th. Many retailers are expecting more inventory over the weekend.

First off, check this list of authorized vendors. Then, these are some of the best places to start looking locally:

My local Walmart said they’re getting another box of 2,000 or so on Friday morning, but the manager expects them to sell out extremely fast. Additionally, Barnes & Noble or other book stores should have them as well. Or at least they did at one point. A few other options are Kroger, Best Buy and even Toys R’ US. Amazon removed most from its website for safety reasons. 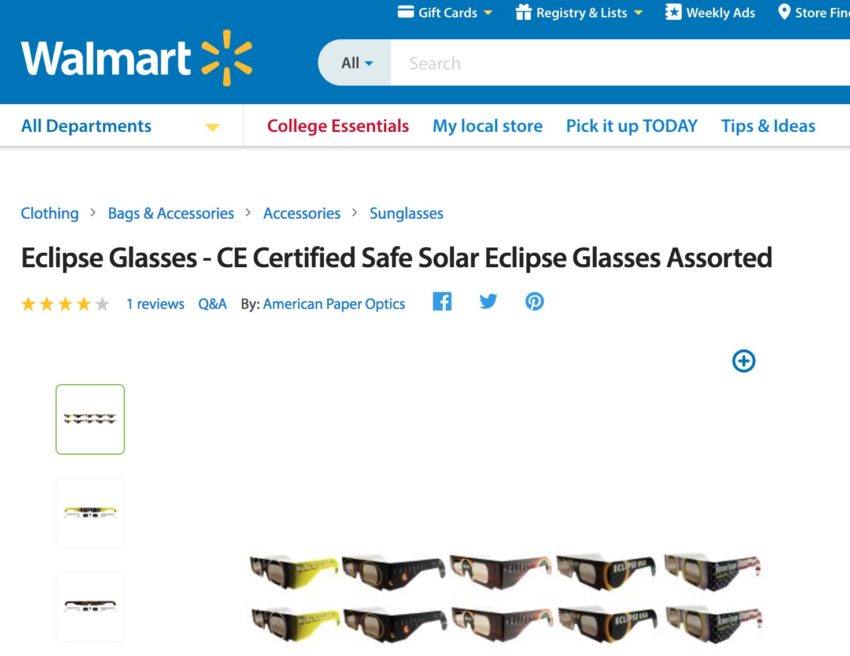 Heading to Craigslist is another option, although we don’t recommend it. There’s a good possibility that most being sold are fake, or aren’t certified for use. However, I’m finding hundreds of official glasses on Craigslist for $10 a pair. Sadly, most of those sellers received them for free at a local library. So while it isn’t very nice, Craiglist might be a good last resort.

If you do manage to find some glasses at a nearby gas station or on Craigslist, make sure they’re safe before use. There are a few different ways you can make sure you’re safe for the big event.

First things first, you’ll want the check for the ISO number. According to the American Astronomical Society (AAS), a real pair of solar eclipse glasses will have a label that says “ISO 12312-2”. This is an international safety standard that confirms the glasses reduce visible sunlight to safe levels and blocks UV and IR radiation. Here’s where to look.

However, some people are greedy (like those Craigslist people selling free glasses) and fake sets could still have a certification label on them. That said, it’s a good place to start. If you’re worried check for any branding and see if they’re on the reputable vendor list.

Next, you can quickly check yourself although this isn’t the best route. Basically, a pair of certified glasses are extremely dark when you look through the lenses. Almost to the point that you can’t see anything. Some sites are stating they’ll be 1000x darker than a pair of sunglasses. You shouldn’t be able to see anything when you look through them except for a bright light, like the sun. So if you’re able to look around in your house easily, they’re probably fake.

If those random glasses you found at a nearby store or on Craigslist are very dark that’s a good thing. Any bright light should appear very dim through a safe pair of glasses.

According to the AAS, when you stare at the sun through safe solar eclipse glasses, it should appear comfortably bright like a full moon at night. If you can’t find any glasses try making a pinhole projector to view the 2017 Solar Eclipse.