For months now, Samsung Galaxy Note 3 rumors have waged on, depicting a high-end and enticing smartphone set for release sometime later this year. And while the Galaxy Note 3 is going to be worth waiting for for many people, there are also several reasons why some consumers may not want to wait for the Galaxy Note 3 release.

Last year, Samsung unveiled its second-generation Samsung Galaxy Note in the form of the Samsung Galaxy Note 2. The device was an upgrade over the Galaxy Note in many areas including the design, the size of the screen, the S Pen stylus, the software both Google and Samsung made, the processing power and the amount of carrier options that were on the table to consumers.

Read: Why You Should Wait for the Samsung Galaxy Note 3.

The Galaxy Note 3 is said to be coming later this year.

Thus far, the Samsung Galaxy Note 3 is shaping up to be a worthy successor to the Galaxy Note 2. On paper, the device appears to have somewhere between a 5.7-inch to 6-inch display with 1080p resolution, a quad-core processor that is either the Snapdragon 800 or the Exynos 5 Octa processor, a 13MP camera, a Galaxy S4 design, and a launch date sometime in September, likely at IFA 2013 in Berlin at the beginning of that month.

The device is shaping up to be a juggernaut and one that should help continue Samsung’s run as the top phablet vendor on the planet. As we’ve said, there are plenty of reasons to wait for the Samsung Galaxy Note 3. However, there is always a flip side.

Here, we take a look at the reasons why consumers shouldn’t wait for the upcoming Samsung Galaxy Note 3 and its host of new features.

Why You Shouldn’t Wait for the Samsung Galaxy Note 3

Plain and simple, the Samsung Galaxy Note 2 is still a great device and will likely be suitable for a majority of those in the market for a large screen Samsung smartphone with a stylus.

The Galaxy Note 2’s 720p display likely won’t be as good as the one found on the Galaxy Note 3, but it’s still good nonetheless. Same goes for the camera. It’s not going to be as good, but it will do the job for those that don’t need the top of the line features. The Galaxy Note 2 is slim, it has a removable back and microSD card slot, it also has an ergonomic S Pen with a host of useful apps.

Keep in mind, this is a phone that is less than a year old. It also remains one of the best smartphones available on the market and buyers wouldn’t be wrong in adopting one instead of waiting for the Galaxy Note 3.

So what this means is that users will need to heavily weigh two things. Screen size and the stylus. The Galaxy S4 screen size is only a bit smaller and it can do many of the things that the Galaxy Note series can, including some features that were once unique to the S Pen.

With the Samsung Galaxy Note series reigning supreme, Samsung and the Galaxy Note 3 carriers will likely keep the price of the new Galaxy Note around the familiar $299.99 on-contract price point. For many, that’s an expensive price tag and one that will be hard to swallow if it indeed arrives. Fortunately, there are and will be cheaper options in the build up to the Galaxy Note 3’s arrival.

For instance, the Galaxy Note 2 price has dropped significantly since it was first released back in October and November. On some carriers, it’s sitting in the bargain bin. Other big screen smartphones like the LG Optimus G Pro are also fairly inexpensive and are viable options thanks to some heavy duty hardware and some useful software. 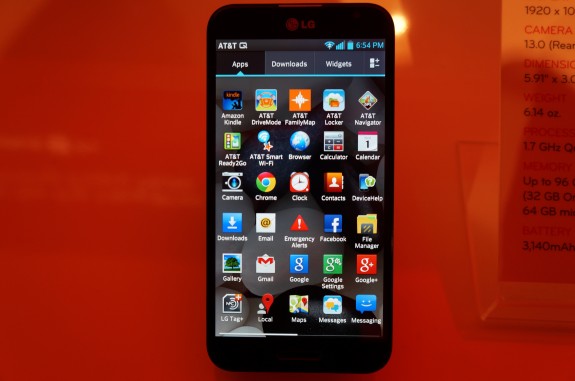 The Optimus G Pro is an alternative worth looking at.

The Galaxy S4 is also cheap through retailers and as we’ve pointed out, is a solid alternative for those looking to get a big screen smartphone made by Samsung. Also, the HTC One price is continually dropping and it’s a device that prospective Galaxy Note 3 buyers should take a look at as well. 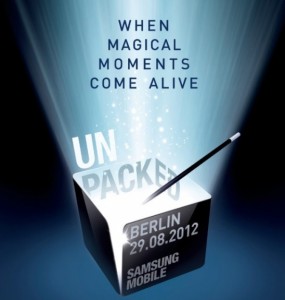 The Galaxy Note 3 launch date could arrive in Berlin as well.

For many people, waiting simply isn’t an option. And while it would be nice to see the Galaxy Note 3 launch and release come in July, that’s simply not going to happen. All signs point to a launch and possible a release in September which means that those who own a broken smartphone will likely want to make a move now.

As we’ve said, there are a ton of other options on the table now and waiting three months or more with a broken smartphone is going to be torture. There is always a chance that the Galaxy Note 3 won’t live up to expectations meaning the wait won’t have been worth it.

Those who can’t spend a ton of money on a smartphone also likely won’t want to wait as the Galaxy Note 3 is very likely going to be as expensive as it always has been.

With the release likely coming in the fall, those that don’t want to wait will simply not want to wait, particularly those looking for the Verizon Galaxy Note 3. Verizon is typically last in line which means that we could see a release in October or November, nearly six months from now. For the patient type, it may be worth the wait, but again, there is a plethora of options on the table now.

You Don’t Want a Bigger Screen

Now, the screen size increase doesn’t necessarily mean that the Galaxy Note 3 will be gigantic compared to the Galaxy Note 2. It will likely only be a bit bigger with Samsung increasing the height while slimming the device down. However, the overall footprint should be a tad bigger and if bigger than the Galaxy Note 2 doesn’t sound appetizing, it’s probably time to move on.

The Galaxy Note 3 will likely have a plastic design.

Samsung is said to be exploring metal designs though they have all been rumored for next year.