Words With Friends 2: What You Need to Know

Words With Friends is a wildly popular game, one that people have enjoyed for nearly eight years. After over 250 million downloads, this week Zynga released Words With Friends 2. Saying it’s the, “biggest evolution of the product” since 2009. Words 2 is available now on Android and iOS, and here’s what players need to know.

Being a popular game the developers can’t change too much or they’ll alienate current fans. Words With Friends 2 delivers a similar yet new experience. In fact, Zynga added over 50,000 new words and even a mode where you don’t have to play with friends at all.

If you’re looking for a new game to play, this might be it. Words With Friends 2 has new game modes, boosts to improve your strategy, and the option to play solo with a computer. One that gets smarter as you progress. Here’s a preview of what to expect.

Nearly eight years after the original, Words With Friends 2 arrived on November 8th. It’s available right now on the Google Play Store, or on iTunes. You’re still taking turns with words on a board, and the game still has ads, but no one has to update. Fans can continue enjoying the original, or try their luck with the latest release. It’s a sequel and an update, but one you don’t have to make if you don’t want to.

It’s worth noting that if you do upgrade to Words 2, all of your friends and any ongoing matches will transfer over. So you can move to the new game without missing a beat, or a letter. If you paid to remove ads on Words with Friends Pro, you won’t see ads in the second release. Otherwise, ads are still inside the game.

At this time we’re unsure if Zynga plans to release a stripped down version for Facebook Messenger like they did the original, or for other platforms. We’ll update once we know more.

What’s New in Words With Friends 2

So what’s new and what makes it worth trying today? Well, a lot, actually. It’s largely the same, but the interface is slightly different. The biggest thing is the addition of 50,000 new words, although most players will enjoy the new solo mode the most. Here’s what Zynga had to say:

“Play against fictional characters in NEW Solo Challenge events, updated with new themes and opponents twice a month. Got a competitive streak? Jump in for a fast-paced team match to test your rapid word building skills in the NEW Lightning Round.”

You’ll notice a brand new mode where you don’t have to play with friends at all. Instead, you face a computer. Every month the theme will change, twice, and the AI opponents will change with it. Giving players a fresh new look twice a month. 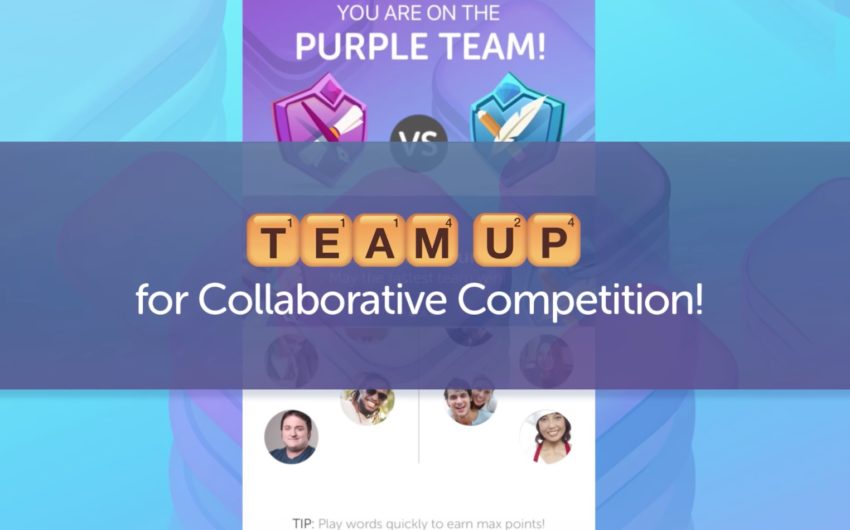 Play with a team of 5 friends

If you’re enjoying your gameplay, try the new Lightning Round modes. You’ll play with five other people, and the team with the most points wins.

You’ll also notice new weekly challenges to earn badges and rewards, then use those rewards for special boosts. The coins and rewards will get you “virtual goods” in the game like unlocking new solo modes. Additionally, you can spend those coins on a “boost” that purists might consider a way to cheat. Boosts will aid you in the game, and even reveal squares on the board showing you where to play a word.

Like every mobile game these days, there are ads and in-app purchases. However, if you paid to remove ads in the original Words With Friends, they will disappear on the new second release. It doesn’t look like Zynga will offer a Pro version of Words 2, so if you didn’t pay to remove them before, you’re stuck with them now.

Then, as we mentioned above, there are multiple in-app purchases available. Players can buy coins to unlock more solo challenges, progress faster, earn more badges, and yes, boost their skills. Whether you get those or not is up to you.

In closing, Words with Friends 2 is a similar yet different experience. The game has bright menus, neat themes yet look enough like the original enough to feel the same. Part of the design was to make the game feel fresh, and not as cramped on the screens of mobile devices.

So you’ll notice more space, bright colors, and tons of new options that will keep you entertained for hours. Download Words With Friends 2 today and try the new solo mode, or put your brain to work with Lightning Rounds. Before you go, check out these 10 other great casual games you can play at work.