WordsWorth, the word puzzle game, is making its way to Android after being on iOS for the past three years. The game is now available worldwide on Android phones and tablets including the Kindle Fire, Nook Color, and Nook Tablet.

WordsWorth is a fairly simple game, players are given a hex grid ranging in size from 3×3 to 7×7 filled with hexagon pieces with letters on them. Players use the letters to form words at which point more hexagons will fall to fill in the space left by those letters. Like most puzzle games, it’s a simple idea that can last for hours.

WordsWorth has three modes of play. Classic is an endless mode where you keep forming words until you can’t any longer. Timed mode has the same gameplay, but everything happens in a time limit. Tumble only has a few rows of letters with more falling from the top, you keep going until the letters fill the screen.

There’s also a mode for multiplayer so you can play against your friends for high scores in timed battles. 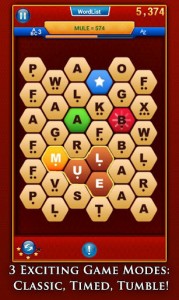 The Google Play and GetJar versions are free with ads, while the other versions cost $1.99. If you like the game it’d be a good idea to get the paid version so you’re not sacrificing battery life. No game is worth the battery life that ads drain from your Android phone’s battery.

The developer also warns that the game will only run smoothly on phones with at least 512MB RAM, 800MHz CPU, and a 320×480 display. It’s not as bad as a game like Temple Run which won’t run on recent phones like the Motorola Droid RAZR, but it’s still worth noting before you recommend the game to anyone with an older, lower-end Android device.