The new Anki OVERDRIVE: Fast & Furious Edition combines one of  best-known movie franchises an incredibly intelligent racing set. At first glance it might look like just a miniature remote-controlled racing set, but there’s a lot more to it than just driving in circles. The Anki OVERDRIVE: Fast & Furious Edition app is robust and will keep racers coming back for more.

Anki sent over a pre-release copy of the OVERDRIVE Fast & Furious Edition set for my son and I to review. To say that he’s thoroughly enjoyed playing with it for the past few days would be an extreme understatement. He’s not the only one that’s impressed. I haven’t taken a close look at Anki’s racing products since it launched its original Drive racing set a few years ago. The set is a massive improvement and the Fast & Furious cars and storyline add an extra dimension. 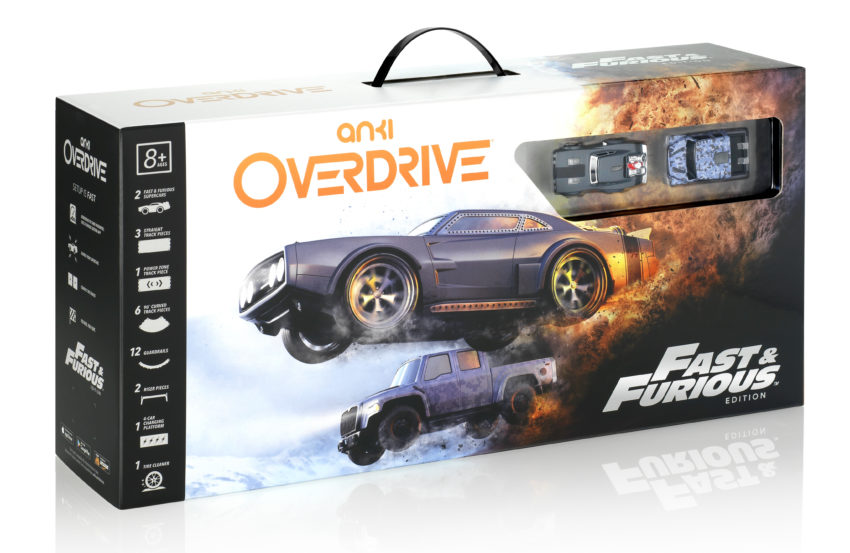 The Anki OVERDRIVE: Fast & Furious is available at Amazon.com, Best Buy, Toys R Us and other retailers for $169.99. You can also pick up OVERDRIVE tracks and cars at Target. 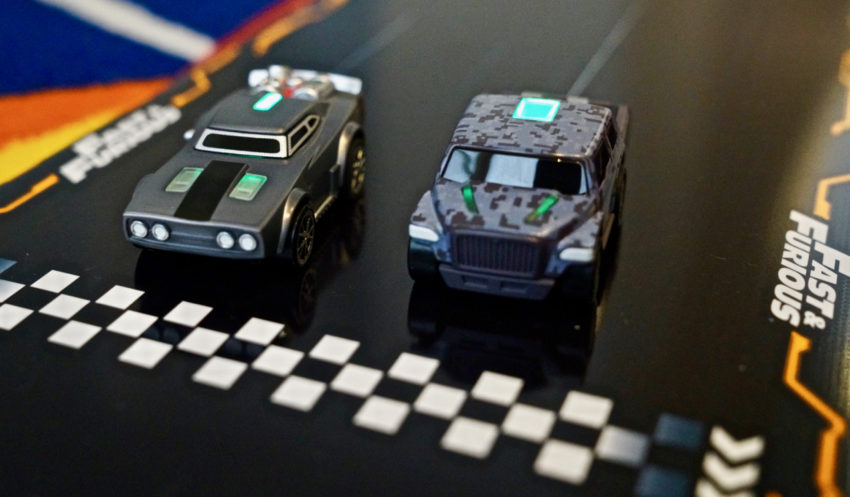 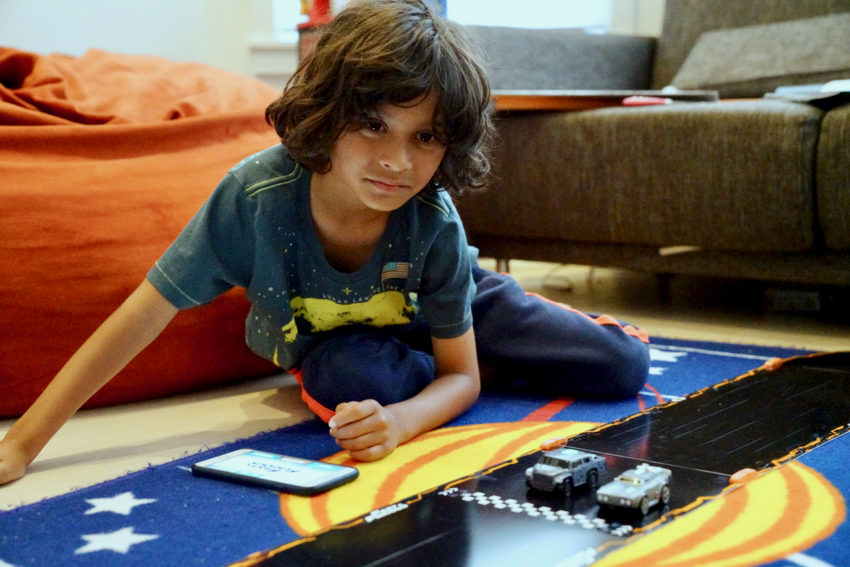 Getting Ready to race with Anki OVERDRIVE: Fast & Furious Edition

Anki labels the OVERDRIVE Fast & Furious Edition as being appropriate for kids aged eight and up, but my six-year-old was able to set the track up without any help. The first time he launched the Fast & Furious app, it instructed him to build a simple oval track.  The track pieces have magnets on them that help them align perfectly. 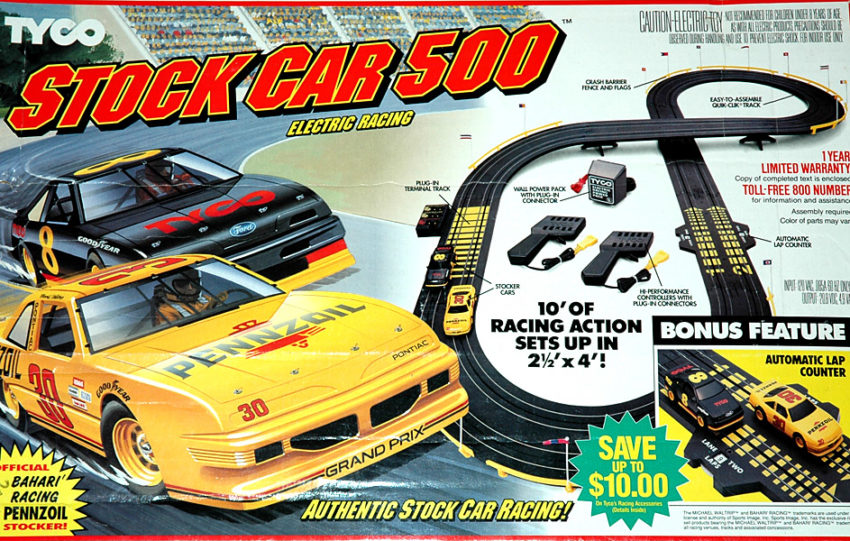 As my son was setting up the OVERDRIVE set, it reminded me of one of my favorite toys from the 1980s: Tyco’s electric race cars. I spent countless hours racing family and friends with a set similar to the one pictured above. Of course, the cars didn’t have any built-in artificial intelligence and we had to control them with a trigger instead of an iPhone. Kids these days will never know the pain of having to race yourself with a Tyco controller in each of your hands… 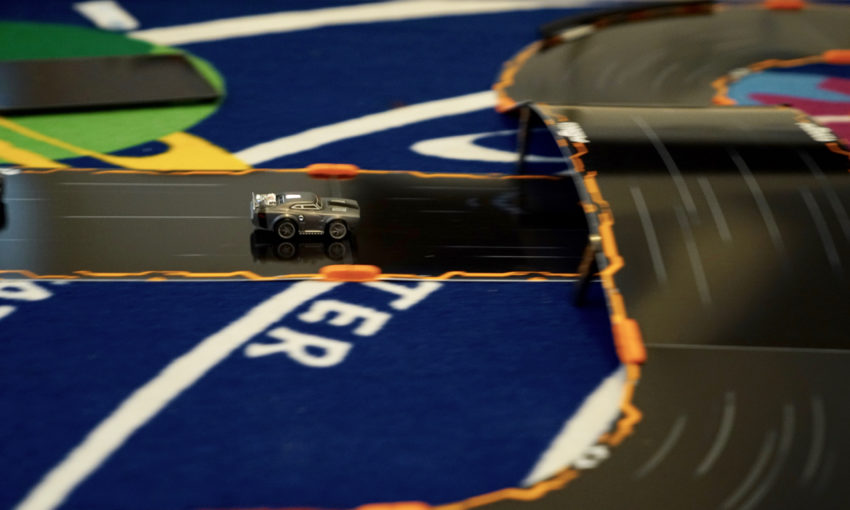 Instead, today’s kids are afforded total flexibility with Anki OVERDRIVE ets. After getting used to controlling the Ice Charger, my son declared that “driving in circles is boring” and reconfigured the track to something more interesting. He ended up building a track with an overpass with the included six curved pieces, four straight pieces and a pair of risers. Kids can get creative with track layouts and there’s no need to follow instructions since the vehicles take a practice lap around the track to scant out the layout before each event. The cars send data back to your phone or tablet to set up the game wirelessly. 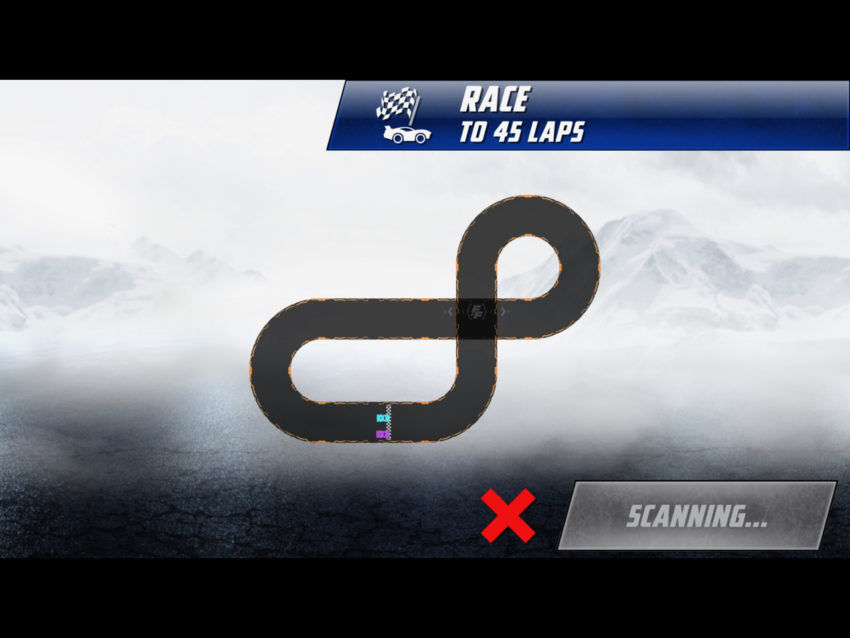 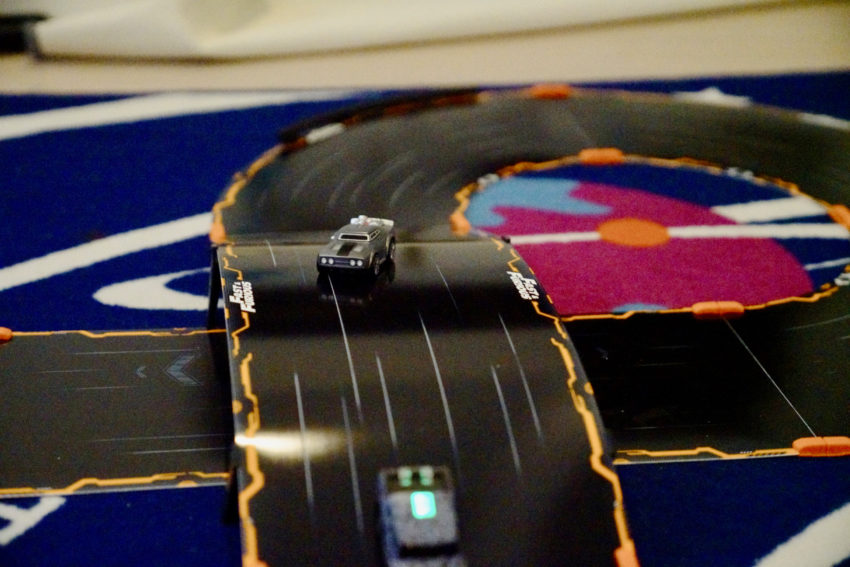 Here is a photo of what my son’s race track looks like in the Anki Overdrive: Fast & Furious Edition iPhone app. The exclusive Power Zone track piece under the overpass that triggers a ‘hack’ that disables drivers from time to time. The cars automatically align at the starting/finish line before the race starts.

If you want to create more challenging courses, you can build race courses with up to 64 track pieces. The extra track pieces cost $10 to $30 each though, so only those with deep pockets will likely max out their sets with that many pieces. The other challenge you’ll face with adding several more pieces is space. My son added a pair of extra straight track pieces to the set and the track maxed out his playroom’s  6ft x 8ft carpet. 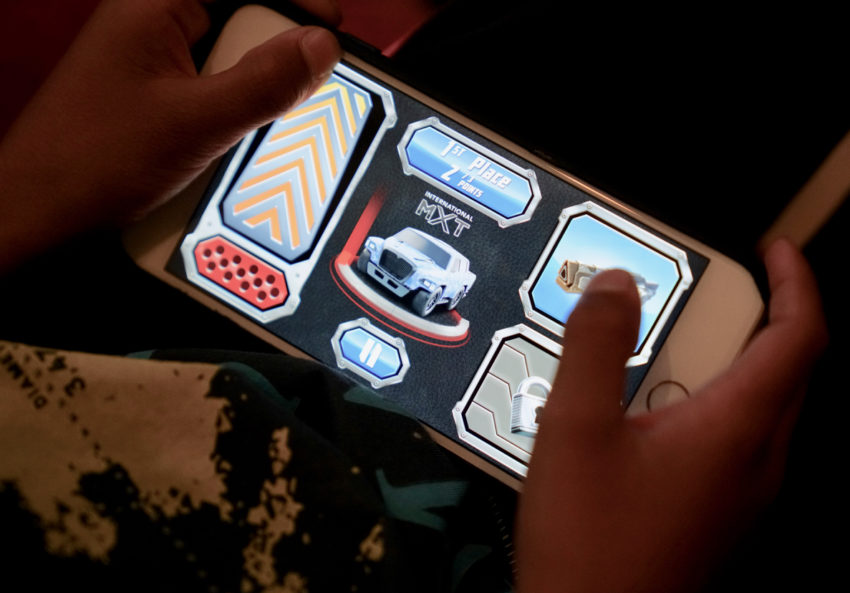 What really makes the Anki OVERDRIVE: Fast & Furious app that can run on iPhones, iPads, and Android devices, including Amazon Fire tablets. Up to four players can race at once, assuming you have enough cars on hand.  The controller portion of the app is very easy to use, with the racer’s left thumb controlling the throttle and brakes, while the right thumb controls weapons.  Tilting the device to the side makes the vehicles switch lanes to pass opponents. 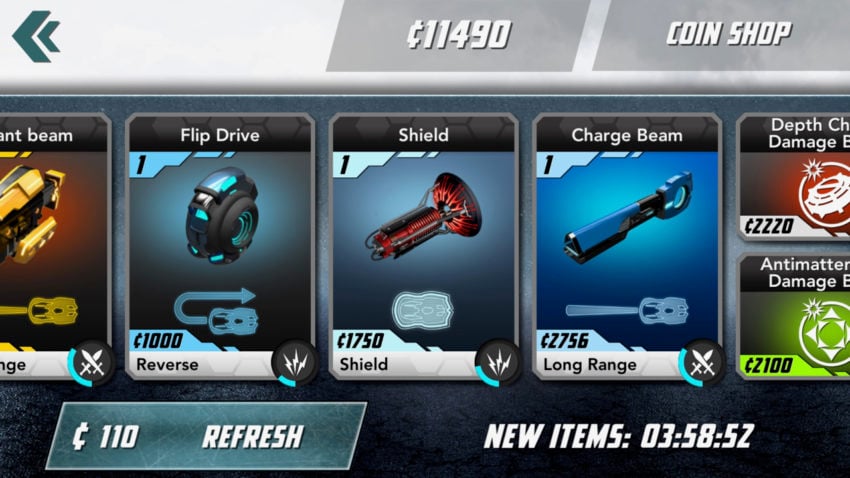 The app looks and feels like a lot of mobile racing games, complete with virtual currency, challenges to unlock and virtual upgrades. While you can simply race a set number of laps, things get a lot more interesting in battle mode, where part of the game is to disable your opponents’ vehicles. The vehicles each come with set capabilities out of the box, but you can quickly outfit them with upgrades to make them more fun. My son’s favorite part of OVERDRIVE is when he disables my car and laps me as a result.

The pre-release version of the app did have a few bugs, but we hope that Anki can resolve them in the near future. Things went smoothly for the first six days of using the app with the OVERDRIVE Fast & Furious Edition set. But on the seventh day, the app repeatedly crashed after the cars ran their first lap. When the app crashes, the cars simply stop in place. Swapping in an iPad mini for the iPhone we were testing with seemed to resolve this mystery bug and we’ll update this review once the public version is available. 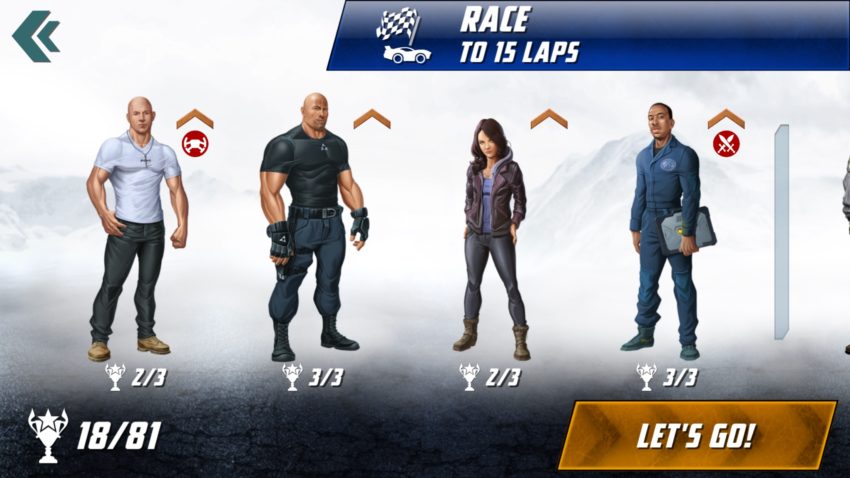 Fast & Furious characters are at the heart of the game, challenging you to races, battles and other challenges. As you race each of the characters, they’ll speak catchphrases from the Fast & Furious movies. On long races the catchphrases can get annoying as they’re repetitive and don’t seem to have much to do with what’s actually happening on the track at times. Overall, the characters and Fast & Furious storyline do add to the racing experience for people familiar with the movies. However, there is a mismatch between the films’ PG-13 rating and the recommended age on the side of the box. I certainly won’t let my son watch any Fast & Furious movies until he is much older since the films feature a lot of violence, crime and other mature situations. For now, he remains blissfully unaware of the movies. 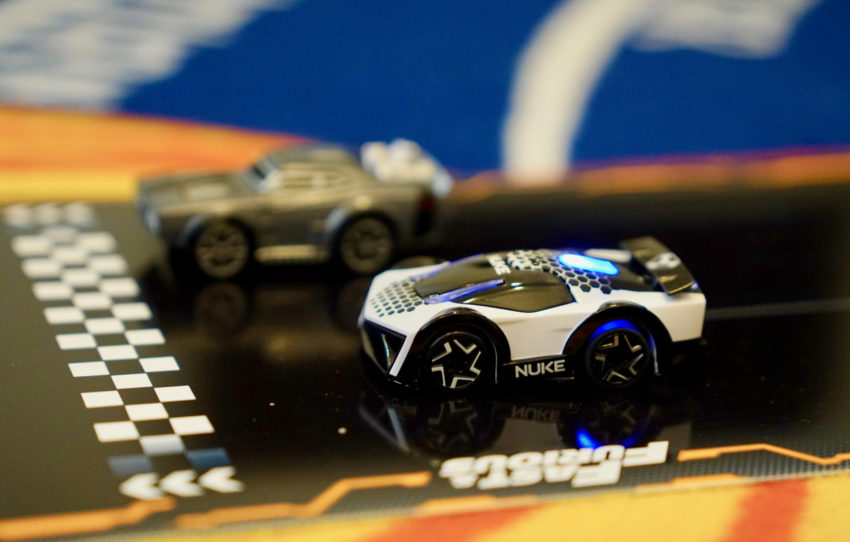 Just because you start with the Anki Fast & Furious: OVERDRIVE Edition kit doesn’t mean you have to live your miniature racing life entirely in its universe. You can add other vehicles from Anki, including a new Supercar called the Nuke Phantom, which is pictured above and below racing the Ice Charger. The Nuke Phantom costs $49.99 and comes with a virtual weapon that can defeat enemy shields. 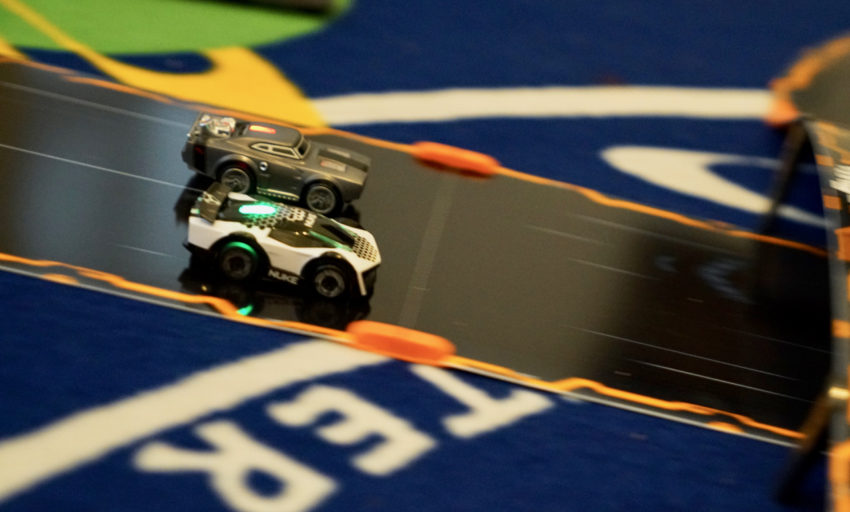 After playing with the Anki OVERDRIVE: Fast & Furious Edition for a week with my son, I can confidently recommend it to families that have at least one that’s obsessed with race cars. You won’t want to buy this for a kid that isn’t passionate about cars. Its $169.99 MSRP is tough to swallow, as are the extra track pieces and additional cars, but the pricing is in line with other high-tech toys, such as the Lego Boost robot and Sphero’s app-enabled R2-D2. While the OVERDRIVE system doesn’t have the same educational value as some app-enabled toys, it makes up for it with multiplayer mode, allowing friends and family to play together rather than isolating themselves on single-player mobile apps and games.

This is the official Anki OVERDRIVE: Fast & Furious Edition trailer.