Apple is about to announce the Apple Watch 3 which will include built-in LTE so you can use it to make calls and send texts without your iPhone within reach. Rumored for months, but two new leaks confirm that this is coming this month and will be featured at tomorrow’s Apple event.

For a short time Verizon listed the Apple Watch Series 3 on the My Verizon app, under connected devices and a massive iOS 11 leak over the weekend included an Apple Watch 3 with the iOS 11 signal bars on the screen and other hints at a connected device. 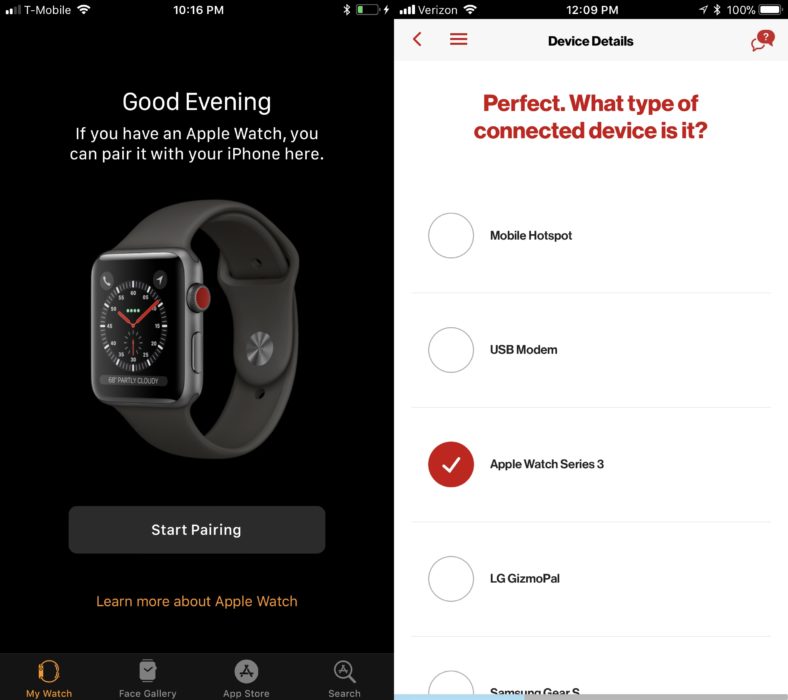 The Apple Watch 3 with LTE as discovered by 9to5Mac and Reddit user tarheel34.

This is one of the biggest reasons you should wait to buy the Apple Watch 3, especially since we expect that it will arrive on store shelves later this month with tons of new features that WatchOS 4.0 can’t bring to your current Apple Watch.

A user on Reddit shared a screenshot of the My Verizon app showing the Apple Watch Series 3 listed under Connected devices. This indicates that it will feature LTE so that you can make calls, send texts and more without your iPhone.

One of the interesting features noted on the 9to5Mac video is the presence of a Maps complication. With GPS and LTE, you should be able to pull up directions on the Apple Watch 3 and use it to get around without carrying an iPhone with you. Although there were some reports that the Apple Watch 3 wouldn’t be able to make calls right out of the gate, the latest rumors suggest there will be a good deal of connectivity available to apps and the watch with LTE.

We don’t know yet which apps will have access to the LTE connection and what they will be able to do with it just yet. While you can likely make calls, use Siri and get directions all while streaming Apple Music, we don’t know if this will include support for the upcoming Spotify Apple Watch app to stream your music while on the go. Keep in mind that you will still likely need the iPhone to manage the Apple Watch, and there has been no indication of an Android Apple Watch app to manage those options.