Go ahead and run your eyes Sony Ericsson Xperia X10 owners on AT&T but it won’t change the fact that Android 2.1 was just released for your device, an update that was thought to never be coming at all. 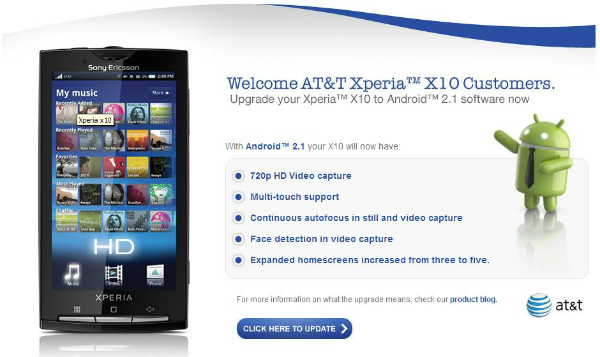 Sony Ericsson has surprised X10 owners on AT&T with a manual update to Éclair aka Android 2.1 and it’s going to be bringing a number of improvements to the device including:

Needless to say, Xperia X10 owners should be over the moon about this update. It’s definitely a good one. Now, this might not be the last Android update for AT&T’s version of the device. In fact, Sony has confirmed that Gingerbread will arrive on the X10.

However, they also have said that some X10 devices might not get it, which means AT&T owners might be left in the dust. Today is a good sign though, so keep those fingers crossed and hope that an Android 2.3 update is on the way as well.