Whether you are looking for new Apple Watch bands at Apple, Amazon, Best Buy, Verizon or Target, you can find a wide range of colors and materials. Nylon and Silicon Sport bands are popular as are leather and metal bands. There are even a few super protective bands that include a case or a heavy duty clasp.

Here are the best looking bands, the best performing bands and the best feeling Apple Watch bands that you can buy;

With prices from $9.99 and up, you’re sure to find one you like in a price range that you can handle. After you find your new band, check out all the exciting things the Apple Watch can do.

The Casetify iPhone cases rock, and so do their Apple Watch bands. They offer a lot of options including some really bold designs, but the best one we’ve found is the Apple Watch Leather Loop band alternative.

Instead of paying $150 for a Leather Loop, you can pick up this high quality alternative for a third of the price. Unlike Apple’s band, you can also get it for the 38mm Apple Watch.

This lightweight band looks amazing, is available in five colors and it holds in place with a magnetic clasp.

The Catalyst Impact Protection Apple Watch case and band is a great option and it’s the only Apple Watch case I’ve actually enjoyed wearing. It looks great and it offers excellent protection from wear and tear while I use the Apple Watch out in my yard and doing heavier duty work in the woods.

This case protects the edges of the Apple Watch without adding any noticeable bulk and then you can pair it with awesome Apple Watch bands that come in a variety of colors. I’m partial to the Orange/Red band option and I like that the watch band has open areas so that my wrist can breathe while working out or doing outside work. This band also offers a lot of options to easily find the perfect fit. 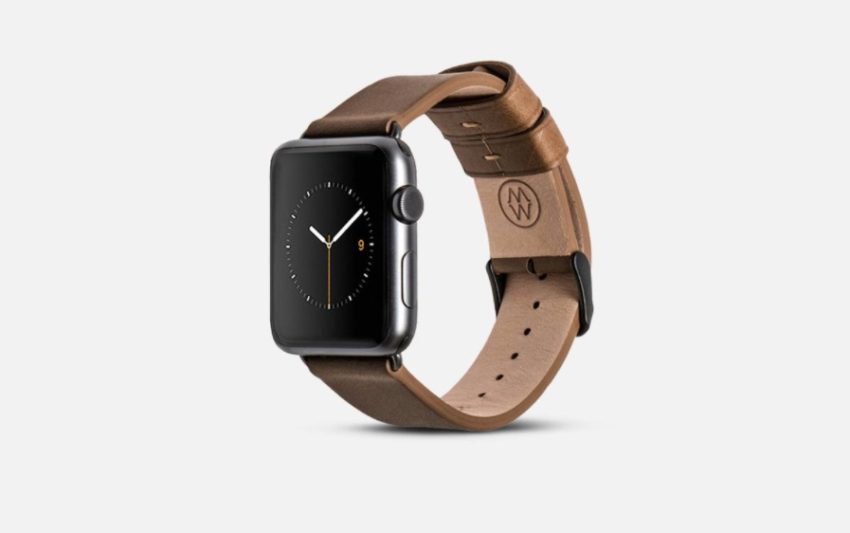 We’ve been using this band with our Apple Watch for about a year and it looks great. There is just a little amount of wear that adds some character to the Apple Watch and it looks perfect for day to day or dressed up for a wedding.

This Apple Watch band is made from genuine leather and it is available in five color options. We typically swap it out when we are on a workout kick, but for most people this is perfect for day to day use, yet affordable enough that you won’t feel bad if you only break it out when you need to dress up. 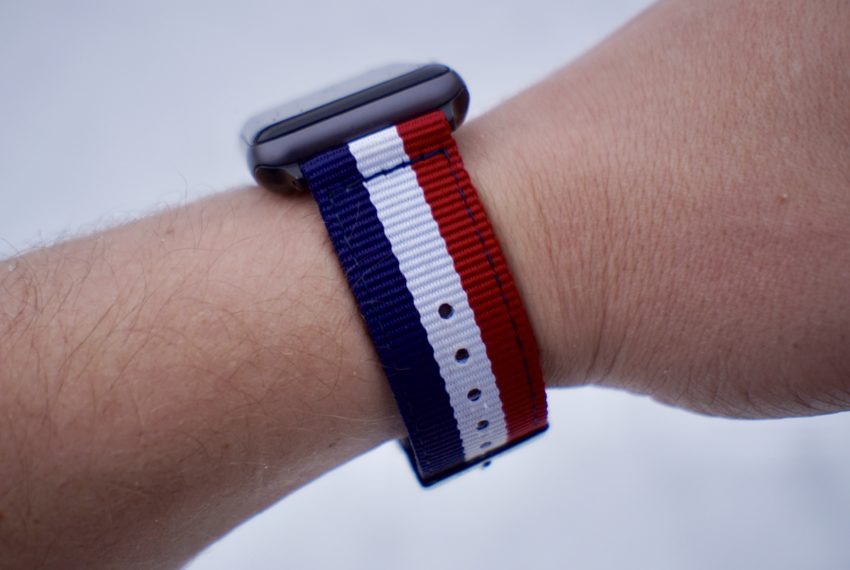 I love the Southern Straps nylon Apple Watch bands. These are available in a wide range of colors and designs, and made from high quality nylon. The bands are stiff when they arrive, but after a few days of use they form to fit your wrist perfectly.

I like that I can expose it to water without it staying wet as long as Apple’s Sport Loop band and that it does a good job at not staining when I get it dirty or wear it while working outdoors.

In addition to great nylon Apple Watch bands, Southern Straps makes a beautiful leather band. You can read my full Southern Straps review to learn more about both styles. 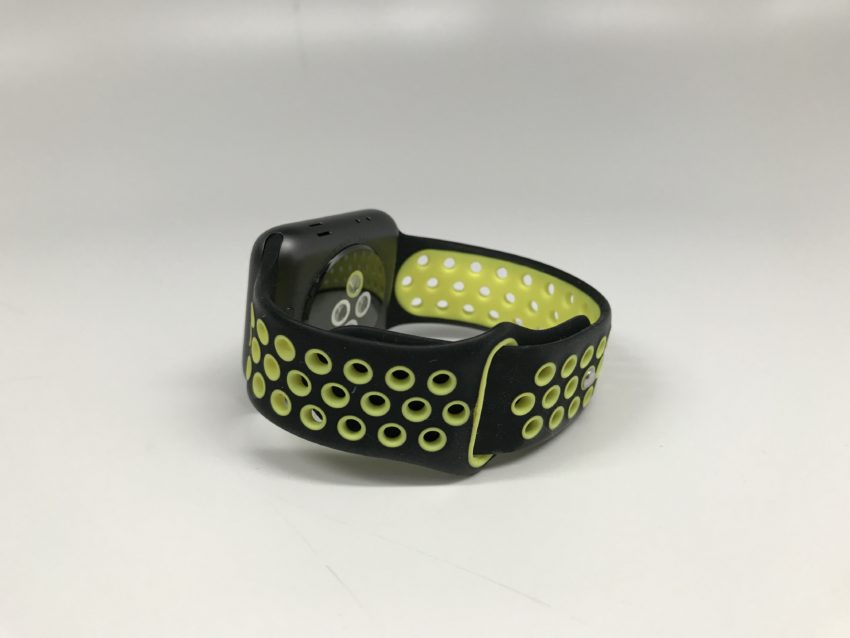 It looks like the Nike+ band, but it’s much cheaper.

The OULUOQI Apple Watch Band is a lookalike for the Apple Watch Nike band and it’s much more affordable. This band looks almost identical to the official Nike band and it feels very good on your wrist. It’s almost the same quality as Apple’s band and close enough for the price you pay.

We used this as our daily driver for about a year and it was an excellent band that served us well while working out and doing work outdoors all summer. After a little over a year the metal stud that straps the band together started to show a lot of signs of wear so we had to retire the band.

Even with that limitation, the band is less than $10 and it lasts a long time for that price. The company also says they will replace any defective item for 18 months, so if this happens to you, it’s possible to get a replacement. 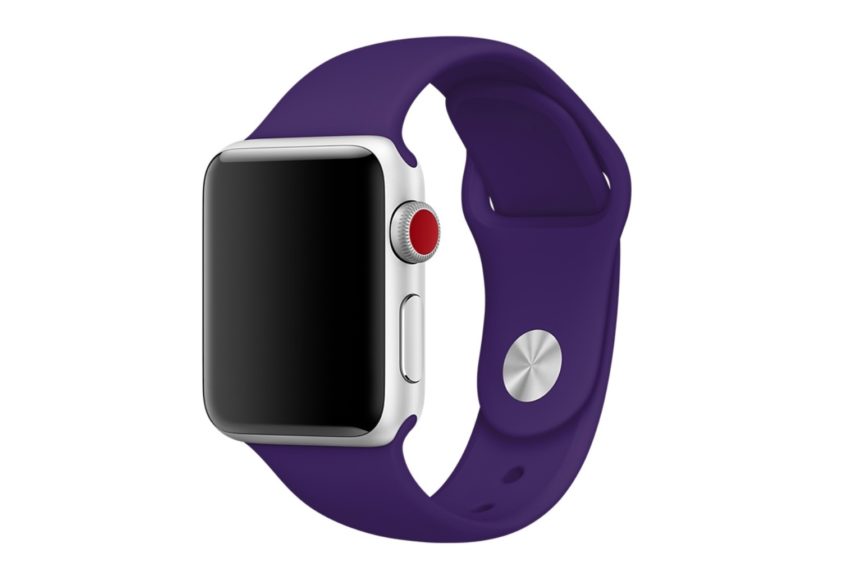 Sometimes the first party option is among the best, and this is one of them.

While you might already own this one, it’s definitely one of the best Apple Watch bands you can get. The official Apple Watch Sport Band is made of a super amazing silicone that is soft, but not grabby like some silicone. It’s frankly the best feeling Apple Watch band out there if you want something you can wear day in and day out for the entire time you own an Apple Watch.

This is available in a wide range of colors and the strap design keeps you from having to deal with a flap of the strap bouncing around. one complaint from some users is that since the extra band tucks in it can make finding the perfect fit difficult. This is a band that you’ll either love for fitting perfectly, or be constantly adjusting on your wrist, so it’s worth trying one on.

Available direct from Apple and at retailers like Target and Best Buy, you can sometimes find a sale and there are some new colors added at least once a year. 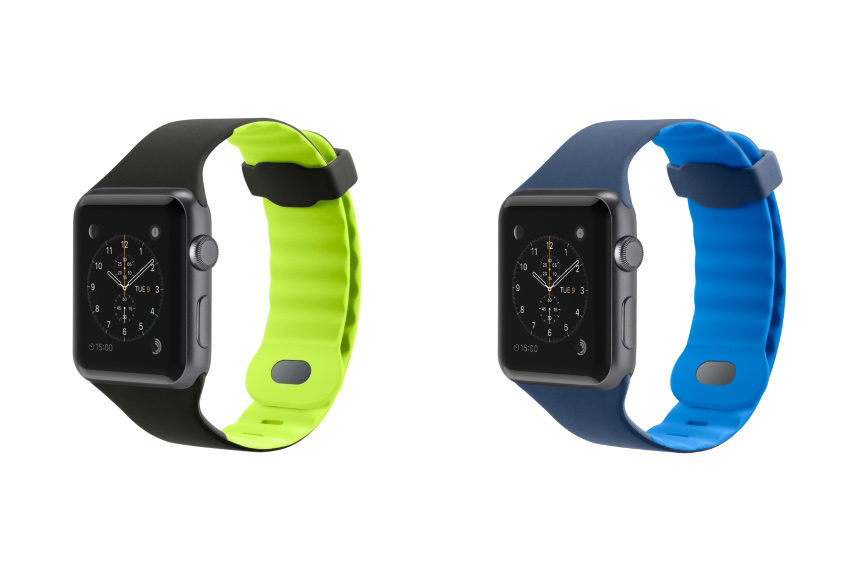 For users looking for a better fit, the Belkin Apple Watch Sport Band is where it’s at, and it comes in cool two tone colors that look very sharp. I’ve been testing this one out for a week now and love the fit and overall look.

Unlike the Apple Watch Sport Band, this one keeps the extra band outside, which allows you to better tailor the fit to your wrist. That doesn’t mean there is a flap left hanging. There is a snap at the end of the watch band that attaches to the other side to keep everything locked in place while you are out and about.

Available in four color combinations for both Apple Watch sizes. You can find this direct and at select retailers. 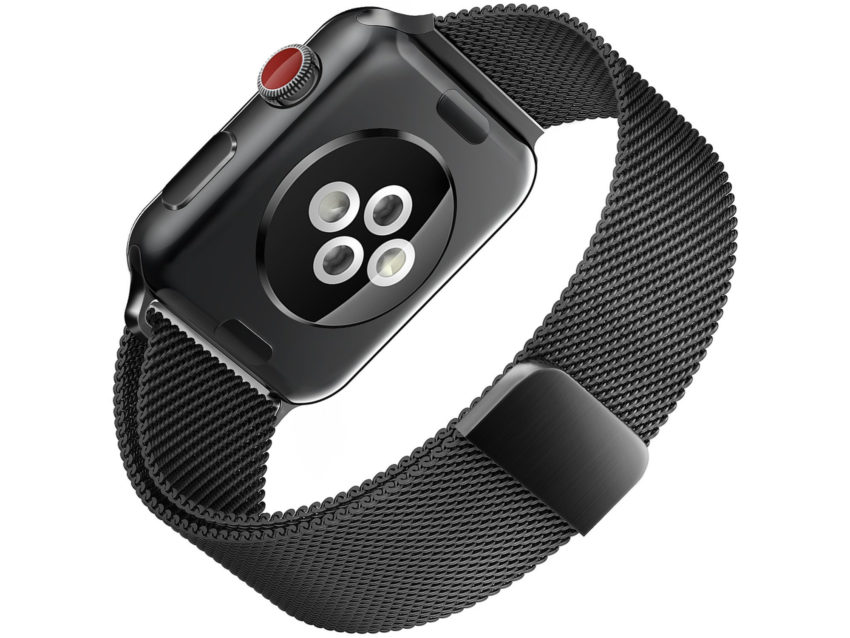 Milanese at a fraction off the price.

The Milanese loop Apple Watch band looks amazing, but it’s incredibly expensive for most buyers. If you want that look, but don’t want to pay a fortune, you can pick up a look a like on Amazon for under $20.

The Saveband Smooth Stainless Steel Magnetic strap is a Milanese loop alternative that is in the top selling smartwatch bands on Amazon. You can get this in multiple color options to coordinate with your Apple Watch color and it loos very nice.

Instead of spending over $100 on the official Apple Watch Milanese loop band, this is an excellent alternative that will help you build out your collection or make a great gift. 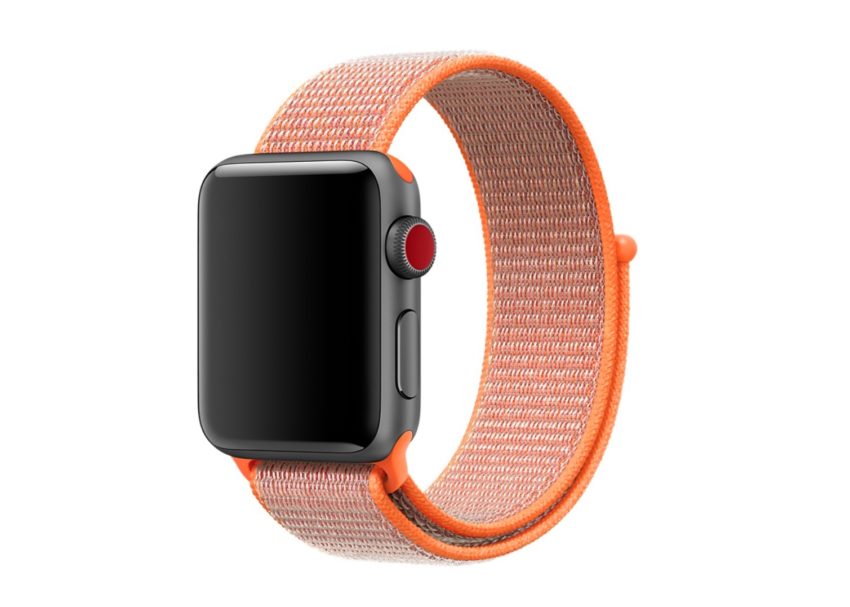 The Sport Loop is super comfortable.

The new Apple Watch Sport Loop is a softer Apple Watch band that is breathable and you can fit it perfectly to your wrist since it uses a loop around and velcro style clasp.

It’s a cool new option from Apple and it’s available in a lot of colors, including some brighter options than the Silicone Sport band. Even though it’s fabric, the material helps keep sweat from getting trapped under the band and it dries out decently fast.

You can pick this up from Apple or at retailers like Best Buy and Target. It’s available in eight colors and in both Apple Watch sizes. 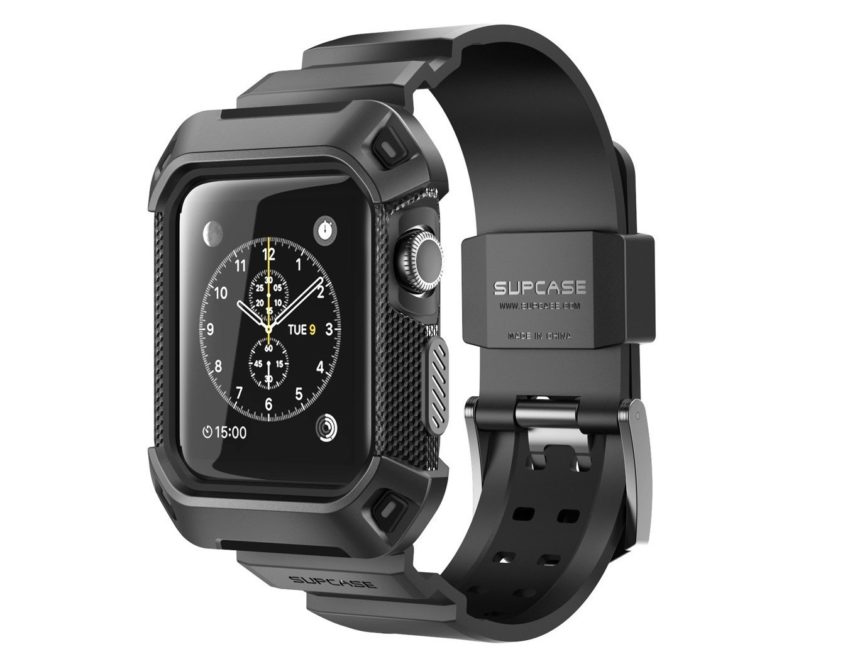 An affordable Apple Watch case that can handle a rough lifestyle.

Do you need to protect your Apple Watch while you work in a shop or outdoors all day? Or do you want to wear it on a Tough Mudder without worrying about scratches and damage from shock.

The Supcase Rugged Protective Case with straps will protect your Apple watch by covering up all but the screen and the crown. This includes big, heavy duty bands with a secure two prong clasp that will keep it in place while you work or run.

You’ll need to make sure you get the right size for your Apple Watch model. This specific option is designed to work with the Apple Watch Seires 1 and Series 2, but it’s not ready for the Series 3 yet. 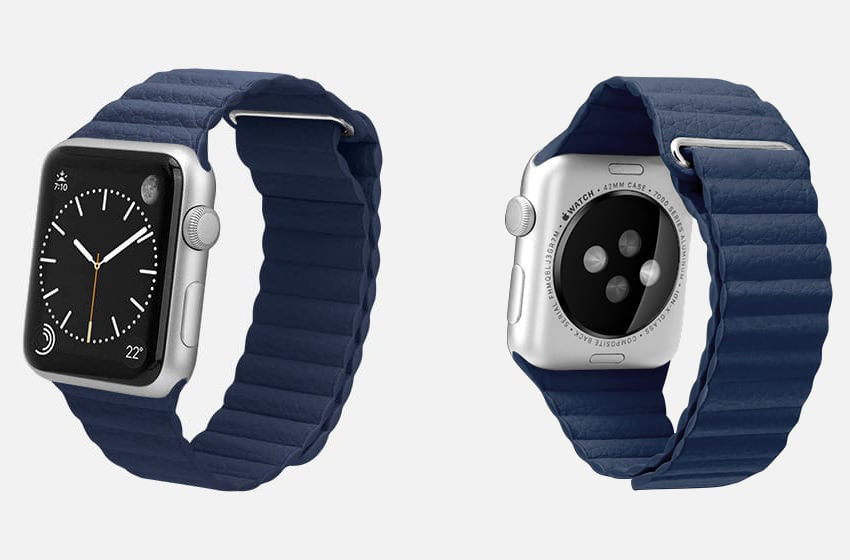 The Belkin Leather Apple Watch band is another great alternative to the expensive Apple options. The Classic leather band is available in three colors and you can get it for both Apple Watch sizes. the band is 3mm thick and includes enough holes to fit most wrists.

Belkin’s leather is soft and very flexible, which offers a very nice fit. The only visible branding is a very small Belkin on the clasp. The gray is really sharp, and we like that it offers nice overall look with Space Gray.