Rugged smartphones aren’t new, but they are certainly getting better. Case in point, the Casio G’zOne Commando which is MILSPEC 810G rated for shock, immersion, heat, dust and more. The Commando runs Android 2.2 and brings with it a collection of G’zOne apps that are designed to meet the needs of outdoor adventurers. Despite the need for added bulk and weight to deliver a phone that can sit underwater for up to a half hour, the Commando is a very pocketable phone with a very nice feel. 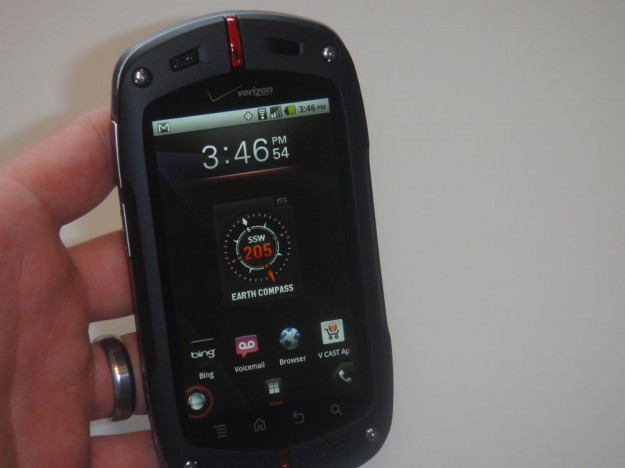 The Casio G’zOne Commando isn’t for everyone. It isn’t running the latest processors and the 3.7″ display is smaller than you’ll find on the HTC ThunderBolt and Droid Incredible 2, but so far it looks like a good choice for adventurers, contractors, firefighters, military or police officers who want a phone that doesn’t need to be coddled or wrapped up in an $80 case to protect it.

The phone has a very bold design, which lends itself well to a rugged phone. The visible screws, ridged edges and grip-able material work together nicely. The ports for the headphone, USB port and the battery backing are sealed with rubber rings that keep the water and dust out. It’s hard to describe how good the phone feels in your hand without actually holding it. The Commando has an incredibly solid feel that we haven’t encountered on a smartphone before.

One of the really nice things we have noticed during the first day of use is that the Commando has a lot of hard buttons for activating things. While other phones are shedding buttons, the Commando has added a dedicated G’zOne button and dedicated camera button in addition to the easy to find volume rocker and power button. These are nice touches for a phone that will be used on the trail.

The included apps are designed with outdoorsmen and women in mind. There are a small collection of apps that may or may not be useful to you. Personally, I won’t be tracking the tides, but there are some interesting use cases. We’ll look at these apps in more detail for the full review and be sure to include a closer look at the Casio G’zOne widgets, such as the earth compass and weather app that tells you if it is coat weather or not.

The Casio G’zOne Commando is available from Verizon for $199.