After months of rumors and speculation, the big Clash Royale April 2018 is finally here. Bringing with it a brand new Clan Wars game mode, balance changes, emotes mute, and lots more. Then, this release revealed potential new cards and troops for the Clash Royale May update. With that said, here’s everything you need to know about Clash Royale Clan Wars.

This is a big update for Royale. While the headline feature is Clan Wars, you’ll find multiple quality of life changes throughout. Changes that will make the game fun again.

Below we’ll go over everything you need to know about this new Clan Wars update. We’ll detail the latest balance changes, what we know about new cards coming in May, and how Supercell is fixing some of the biggest problems inside Clash Royale.

As usual, the developers made changes to some of the most popular and least popular cards or troops. Basically, balancing out the gameplay to keep things fresh, fun, and exciting. Here are the balance changes that hit on April 24th. These will make a difference in battles, and Clan Wars.

While everyone will likely jump right into Clan Wars, there are other changes worth talking about. These are quality of life changes that will make Clash Royale fun again, better, and more exciting. The biggest one being the option to permanently mute emotes and all those obnoxious cry faces.

Yes, Supercell will let you turn off emotes, and you probably will because spectators can do them too. That means throughout a battle or clan war attack you could get hit with Cry faces from the opponent, and everyone watching, including his clan-mates. Meaning you might get spammed with dozens of them during battles.

The most important change, for me, is that players that leave or quit a 2v2 match have a cool-down period. Basically, don’t quit and leave other players hanging or you’ll pay for it. We’re not sure how long the wait is, but this is a welcomed change. Supercell also made changes to card collecting and sorting, and fixed Supercell ID. Find out more right here.

Now, for what everyone is excited about — Clan Wars in Clash Royale. It’s a lot to digest and take in right away, so click here for a full breakdown right from Supercell. Basically, your entire Clan can now participate in War vs four other clans. These last for a few days, and have several different layers.

I’ll try to explain this as simple as possible. 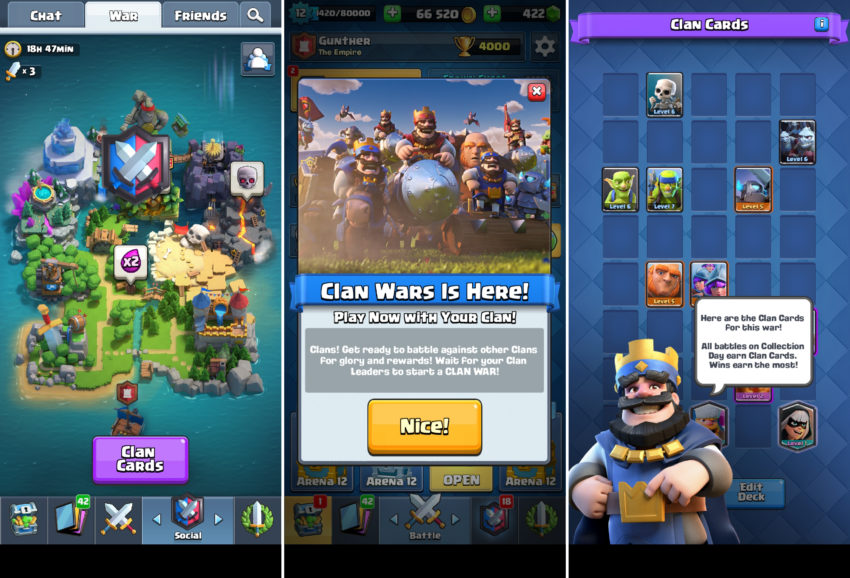 Once your clan leader or co-leader starts a Clan War, you’ll go to the new Clan War island. From here, each player in your clan can do three battles on the first day. There are several different battle types to choose from, and the more you win the more “clan cards” you get. These are different from your personal deck and cards, making each and every clan war unique.

Each victory rewards cards for the Clan War deck you’ll eventually use in a few days. Does that make sense? Your entire clan does three battles the first day using their own deck, or draft challenge decks. Then, the second day is all about WAR.

At the end of the first day, the Clan uses all the cards they’ve acquired to make the best deck possible, then use that deck to battle against other clans. So yes, it looks like there are five clans participating at a time. 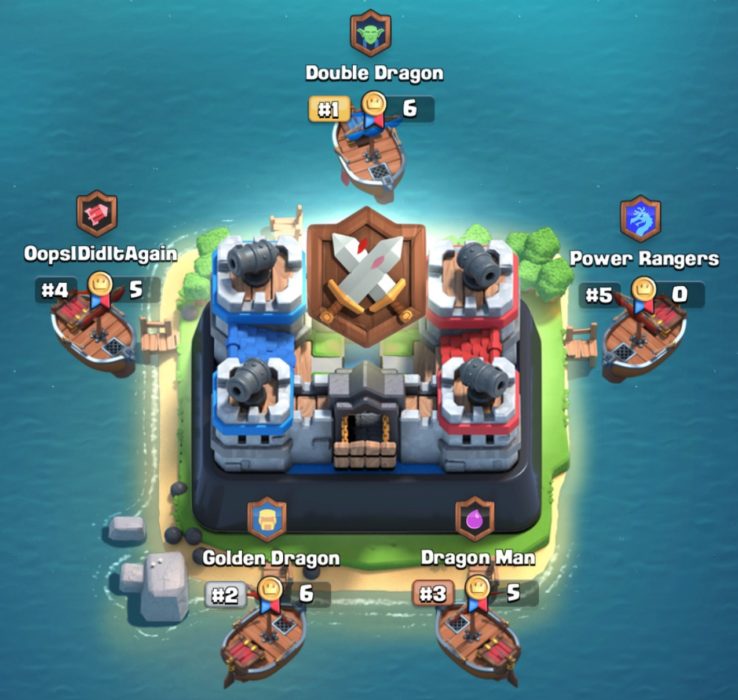 Here’s the thing — each clan has different cards, card levels, and options. This means all those popular “meta” decks you see over and over again during regular gameplay won’t be a problem during wars. Each war is unique. And if the clan you’re facing didn’t earn enough zap spells during the first two preparation days, they can’t counter your zap-bait deck.

We still don’t know exactly how Clan Wars work, but it’s going to be fun, unique, and challenging. The more wars you win, the bigger the “War Chest” at the end. Supercell removed the Clan Chest and replace it with the war chest. At the end of every clan war season, you’ll earn a War Chest. Your War Chest is based on your clan and the highest ranked war you participated in during the season.

The video above is a full Clan Wars guide from a popular Clash Royale YouTuber.

Saving the second best for last, we have potential information about the May Clash Royale update. Basically, next month Supercell is going to further balance the game, fix any Clan War problems, and release some new cards. Looking over the April update release notes did you notice the game developers mentioned “Double Trouble” and also said “Watch your step when walking in the woods near Royal Arena”? These are two hints for what’s coming in May.

Then, a user on Reddit revealed the image below, based on information and files found in the April release. This potentially gives us our first look at the next three troops in Clash Royale. 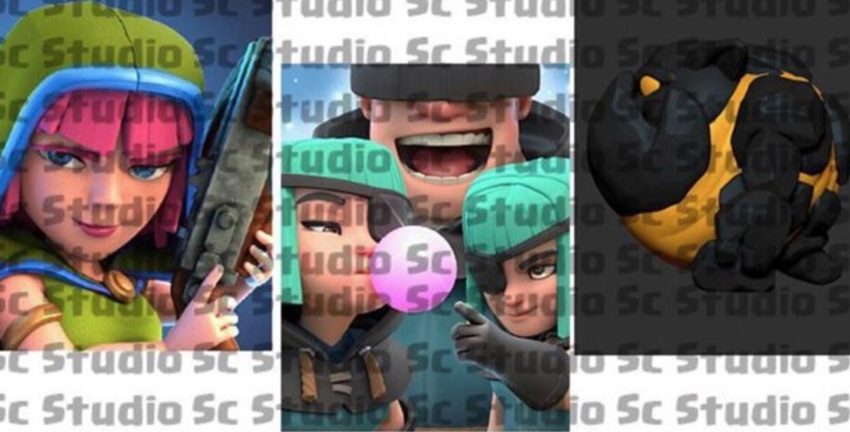 According to this image, there’s a new Elite Archer, or something similar. Is that a cross-bow? Then, we see “double trouble” which looks like an Archer mixed with a Bandit. We have no clue what they do, or how these two girls work. Then, last but not least we see a third card, which could replace the Fireball or rocket in some decks. This looks like a giant boulder you can roll down the Arena, and matches nicely with Supercell telling players to “watch their step”.

In closing, just know that the Clash Royale April update is a big one, and it’s available as we speak. Clan Wars look extremely fun and have lots of potential. That said, we’ll have to test them out to see how good the rewards are, how balanced the troop select is, and test it before saying more. I’ve already started my first Clan War and won 2/3 battles during preparation day.

Now, we just have to wait until tomorrow for the final battle during the first Clash Royale Clan War. Give it a try, and let us know how it goes in the comment section below. Then, stick around for more information about the highly anticipated Clash Royale May 2018 update, which is coming soon. It’ll have a lot of balance changes and fix any Clan War problems. Stay tuned for more details.