A big Clash Royale update is coming in April or May that will remove features, add Clan Wars, and much more. Here’s what we know so far about the Clash Royale boat update. Every few months the developers at Supercell release updates, but rumors suggest some major changes are coming next. From a permanent mute button, Clash Royale Clan Wars, new troops, and they’re even removing the clan chest.

The last major update for Clash Royale came in February, and it mainly delivered balance changes and a new troop. However, it sounds like the developers are going to shake things up here in 2018. In fact, Supercell recently confirmed Clan Wars on Twitter and started teasing a boat and island in-game.

If you think the game is getting a little stale, you’re not alone. YouTubers have slowly stopped playing, and updates are slowing down too. That said, this next update might finally make Clash Royale exciting and fun again. Here’s everything we know so far, what’s changing, and we’ll update once we learn more. 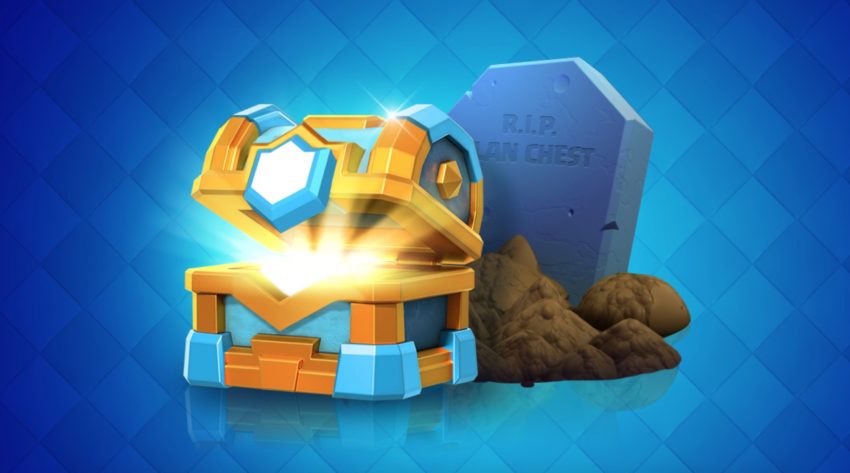 Clan Chest Is Going Away

First things first, Supercell is getting rid of the clan chest in Clash Royale. The clan chest was a way for entire clans and groups of friends to work towards a chest full of awards, gold, and new cards to progress in the game. It’s a group effort to unlock higher Clan Chest rewards.

For whatever reason, Supercell is taking it out with the April update. Don’t worry though, they promise all of the rewards players received from the Clan Chest aren’t going anywhere. In fact, they’ll reintroduce them back into the game through other features. We’re not sure what those are yet, but we have a pretty good idea. 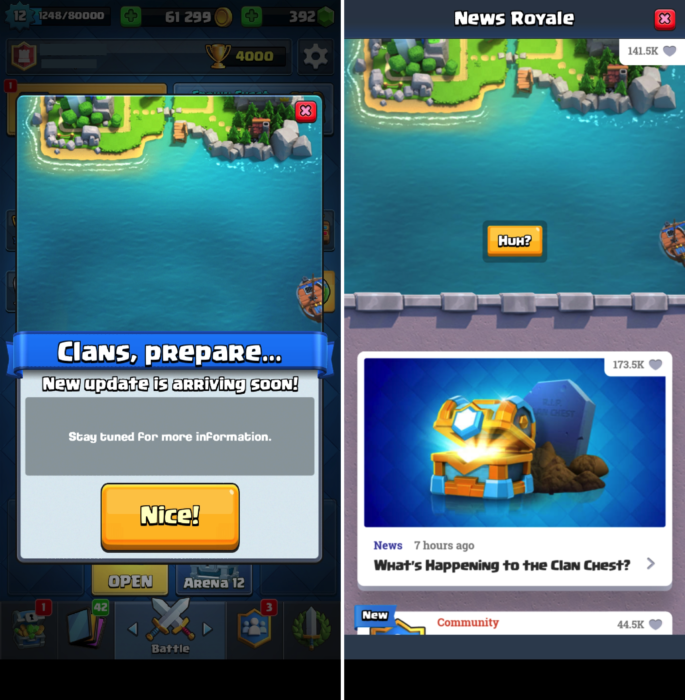 As usual, the developers are making changes to some of the most popular and least popular cards or troops. Basically, balancing out the gameplay to keep things fresh, fun, and exciting. Here are the balance changing coming on April 24th to Clash Royale.

There are some extremely important and notable changes here. These balance tweaks will affect your deck, and how much you win. Pay attention to the 25% Shield decrease to the Dark Knight, lower HP for the Knight, and everything else. We’re excited about the change to the Ice Spirit and Barbarian Barrel. And we’re sure everyone can agree the Tornado needed a reduction, and this change might be just enough.

Then, there are a few bug fixes and other tweaks you can read about right here.

No, you’re not confused and we’re not talking about Clash of Clans. It looks like Supercell is taking a hint out of Clash of Clan’s book, and will soon release Clan Wars for Clash Royale too.

We have no clue how Clan Wars in Clash Royale will work, but they’re coming in the next update. The developers mentioned it back in February, and then again on Twitter. Followed by a huge teaser and video this weekend.

Furthermore, there’s a big thread on Twitter full of potential spoilers. Basically, we’re not sure what’s coming, and we might not know until the first week of May. We can only assume a boat will take you to an island for the wars. At that island we can play in Clan Wars, similar to Clash of Clans, but for Clash Royale. Who knows, maybe this is a massive rework for tournaments, with a bracket-style Clan War.

It’s all a mystery right now, but we’ll know more soon enough. This is either Clan Wars or a new single-player mode similar to the Clash of Clans map that players can work through and slowly beat each arena. Let us know your thoughts in the comment section below.

One of the most controversial aspects of Clash Royale is the emojis, or emotes. Players can say thanks or “good game” to other players. However, they can also laugh, cry, and make angry faces back and forth. And while this is a fun way to communicate, some people spam the emotes over and over again. Or continuously tap the crying face when they win a battle. Rumors suggest Supercell is finally getting rid of them.

This turns a fun way to chat with players into what many see as poor sports, bad manners, and just overall bad behavior. It’s something that a large part of the Clash Royale community is completely against. So, after nearly two years, it looks like Supercell will give players the option to permanently mute these emotes.

In closing, we wanted to go over a few other potential changes coming to Clash Royale in April. Supercell will make big changes to the game as a whole, including balance changes to keep things fresh and fun. Balance changes are a very important part of updates, and they’ll go live on April 24th. We’re not sure if the big update drops the same day, so stay tuned.

Read: Common Clash Royale Problems & How to Fix Them

We’re also hearing Supercell will fix the Golden Chest glitch, Supercell ID problems, add a new Monkey card of some sort, change some user interface things, and more. Sadly, it doesn’t look like the update will be here until near the end of April. Additionally, rumors believe Supercell will not be making changes to challenges, or the Tournaments in this update either.

Basically, a big April Clash Royale update is coming any day now. The developer team already delayed it from March to April, so clearly something important is in the works. We’ll update this post the moment we know more.