As expected another major Clash Royale update is coming soon in March. Earlier this month leaks, rumors and teasers gave us an idea of what to expect, but now it’s official. Imagine joining a battle that’s 2v2, instead one 1vs1. That and much more is coming in the next update. Read on for more details.

In fact, the March Clash Royale update is expected to be one of the biggest in the history of the game. The developers are calling this their 1-year anniversary update. We’re getting an outrageous new game mode where four players can battle at once and a bunch of new cards.

Every month since being released in March the game has seen updates and improvement. With the last being the February update. Many expected a huge update on March 2nd, but sadly it was delayed. Instead, things were pushed back as they finalized the name and are fixing a few problems with one of many new game mode. Read on and watch the video below for more details.

At the beginning of the month a few Supercell employees at the forum started teasing a new feature. Potentially an all-new game mode. Now we know exactly what that is. It’s called “Team Battle” and is essentially 2v2. It should be extremely exciting and lots of fun. All four players have their own 10-elixir bar for using troops and battling, and each team will need to work together.

Elixir isn’t shared, and it’s basically each man for himself while you work together at the same time to defeat the enemy. However, the rage spell will work for all troops on a team. Additionally, we may be able to use all four of the new cards in this special challenge mode. That’s yet to be confirmed though.

We know a big update is coming in March for Clash Royale, but the release date is a mystery. We’re still expecting some new special offers and celebration type changes, before the update is released. Then, likely around March 24th the game will be getting a huge overhaul. 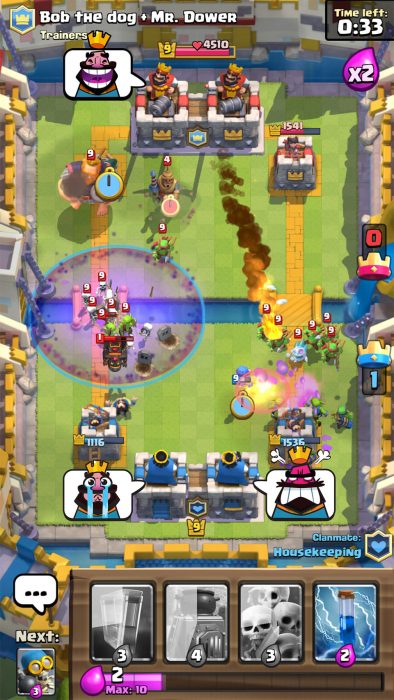 Sadly, details surrounding the March Clash Royale update are still few and far between. That said, a ton of information recently leaked on Reddit, which confirms many of the details. There are new modes, new legendary arena tiers, and four new cards. Orange Juice goes over some of that information in the video above.

Here is the first official photo provided by Supercell. It clearly shows four players are involved, each has their own King Tower, and mayhem will surely ensue. It looks like there will be four crowns, instead of three. One for each tower, and two King Towers. Exciting, right?

It shows both players names at the top, and each player has their own Elixir bar. We’re also hearing any spells or cards like the Elixir pump won’t be shared. It’s a free-for-all, but teamwork will be rewarding and ensure victory.

Additionally, the March Clash Royale update will have the usual round of balance changes and bug fixes. So far we’re hearing there will be changes to the Lumberjack, Dark Goblin, Goblins, Ice Wizard, Dark Knight and more. Then, four new cards will be announced. As usual though, these will be released once every two weeks starting around the end of March. So it will take a little while before gamers will be able to use all of the new troops inside the game.

This update will also help set the stage for what the developers call the “End Game” or a goal besides just getting to the Legendary arena. Now that thousands battle above 5,000 trophies, something needs to change. There will be an end boss of some type, maybe, and three new Legendary arenas. Finishing high in any of the three tiers of legendary will award players gold, gems, and possibly experience points. We may even see level 14-15 soon too.

In closing, nothing is 100% confirmed yet aside from the Team Battle, and some big changes. Expect tons of special offers, at least two new game modes, and lots of new content to keep gamers enjoying all that Clash Royale has to offer. We’ll update once the details are official.