Forsaken arrives on September 4th after three hours of planned downtime. This is arriving right after the Destiny 2 2.0.0 update and alongside the 2.0.0.1 hotfix update that fixes some of the known issues with the last update.

Here’s what you need to know about the Destiny 2 Forsaken editions, and which one you should buy.

What Are the Destiny 2 Forsaken Editions?

Here’s a breakdown the of differences in the three Destiny 2 Forsaken editions available digitally.

This is the base version of Forsaken. You get all of the new game modes, quests, raids and access to the new exotics and other loot.

With this option you get the base version of the game and you also get the annual pass which is a subscription to three new releases of content and raids spanning the next year. There are planned releases in winter 2018, Spring 2019 and summer 2019. These are Black Armory, Joker’s Wild and Penumbra respectively.

With this option you get access to these without any additional purchase and you save $5 off buying the annual pass as a standalone. These locations are not new planets, but “bubble locations” that we will learn more about soon.

The Forsaken Digital Deluxe edition is pricey at $80, and it includes everything listed above, plus a character boost to help you get ahead. The Awoken bonus includes includes;

This is a $10 value based on the pricing of this edition. It does not look like you can buy this separately at this time, but that could change as an upgrade option once Forsaken is live.

Which Destiny 2 Forsaken Edition Should I Buy? 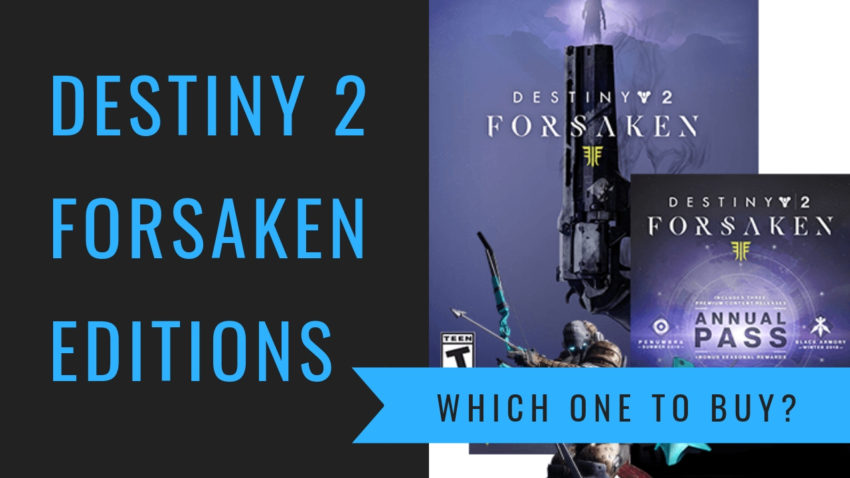 Which Destiny 2 Forsaken edition to buy?

Most players should buy the standard edition, or if you know that you will play Destiny 2 for the next year, buy the $79.99 version which cuts $5 off the annual pass and includes bonuses to give you an edge in the game.

The standard edition is the safest purchase for most gamers. This is especially important with major game releases coming this fall that could distract you, or your friends, from Destiny 2. We recommend most gamers buy the $40 standard edition. Saving $5 on the Annual Pass is an OK deal, but it’s not worth committing to another year for.

If you plan to spend the money on the Annual Pass and you want a character boost to help you out, go straight to the Forsaken Digital Deluxe edition for $80. It offers a better value than the Annual Pass version of the game, and it’s going to help you in the game right now.

If you are just getting started in Destiny 2, the $59.99 Destiny 2 Forsaken Legendary bundle is a good value as you decide if the game is for you. If you’ve been playing on a friend’s account and you know you will play for the long haul, dive into the $99 Forsaken Complete Edition.