Far Cry 5: Which Edition to Buy?

There are seven Far Cry 5 editions that you can buy, and that’s just the physical versions of the game. If you add in the digital options, you end up with even more choices for Far Cry 5. These editions are;

The good news is that if you pre-order Far Cry 5, you get a special bonus package that will give you a little boost as you start the game. The different Far Cry 5 versions include a mix of in-game bonus items and physical bonuses, which may help you decide which version you want to buy.

Filling in the calendar with a March 27th Far Cry 5 release date on Xbox One, PS4 and PC. You can find Far Cry 5 deals on many of the special editions, as well as the normal version.

Here are the major differences between the Far Cry 5 editions and advice on which one you should buy depending on how you play games. 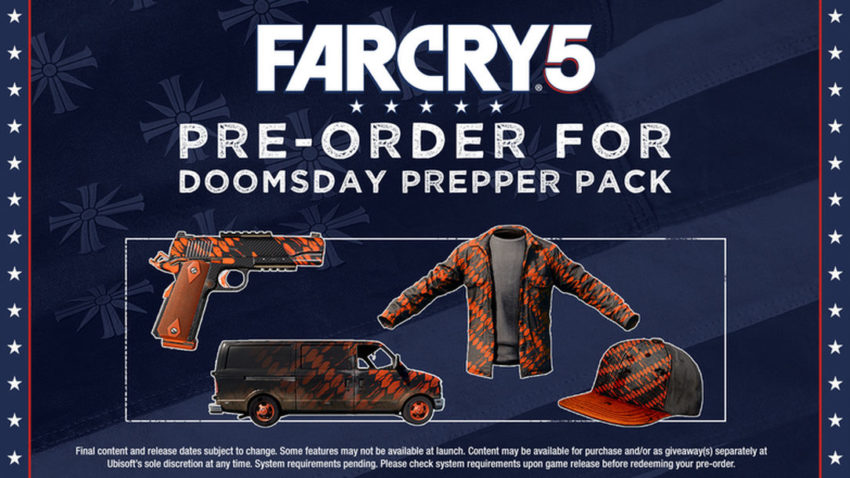 The standard edition comes with a pre-order bonus.

The Far Cry 5 standard edition is $59.99 and it includes the base game digitally or on disk. You can find deals on this version that cut 20% off the price at Best Buy or Amazon with Gamers Club Unlocked or Amazon Prime.

If you buy Far Cry 5 on disk, you may need to wait until stores open on March 27th, since it is unclear if there will be any midnight Far Cry 5 release date events. If you buy this version digitally on Xbox, PS4 or PC you can download the game and play as soon as the release time hits.

The Far Cry 5 standard edition includes the full version of the game and you can buy the Season Pass later if you want to add in the additional DLC that is coming. When you pre-order Far Cry 5 you get a pre-order bonus that includes; the prepper outfit, gun and vehicle skin, consumables. 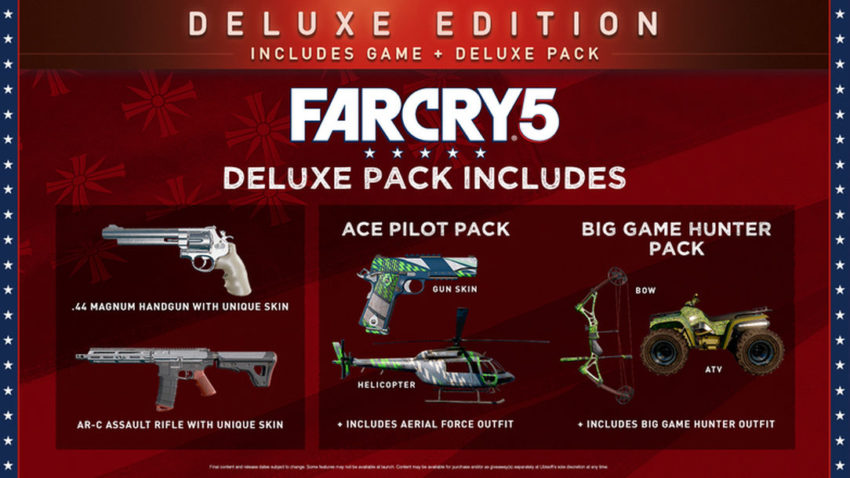 Most users should skip the Deluxe and go straight to Gold.

The Far Cry 5 Deluxe edition is $69.99 and it’s an odd choice for many gamers. If you think you will like Far Cry 5, go with the Standard Edition or go straight to Gold. For $10 more than Standard you get a collection of added in gamer items, including the Ace Pilot Pack and the Big Game Hunter Pack as well as two specially skinned guns.

You can buy this version on disk or digital for $69.99. If you buy it through Best Buy or Amazon you can save 20% on the game. It is also available on Steam. 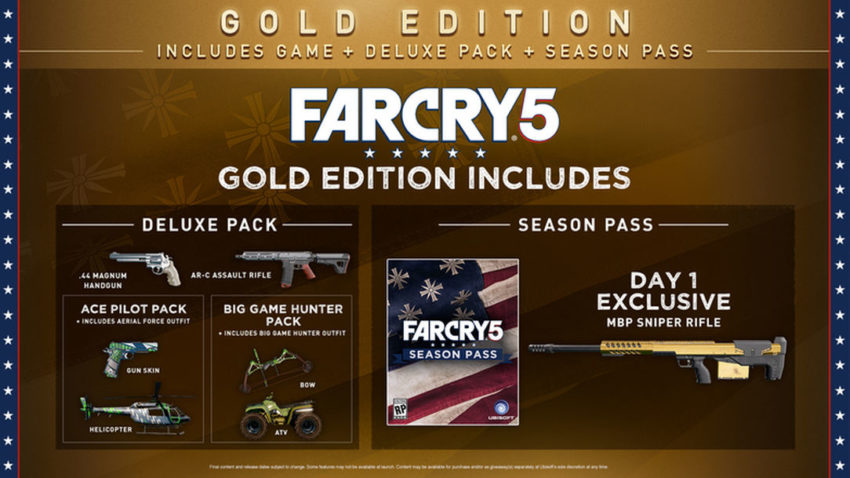 With available deals, the Far Cry 5 Gold Edition is the most tempting.

The Far Cry 5 Gold Edition is the best edition for most gamers who are major fans of the Far Cry series and who plan to play the game and all the DLC that will come. This edition is $99 on disk and $89 on digital, and there are decent discounts on the disk based versions of this at Amazon and Best Buy. There is also  This includes;

Best Buy Gamers Club Unlocked members can buy this for $79.99 and get a $10 reward stacked on top to use on a future purchase. This is a very good value if you plan to play the game for a long time and want all the DLC that will be a part of the season pass. The downside is that we don’t know much about what the Far Cry 5 Season pass will look like. the Season Pass includes early access to the MBP Sniper Rifle. 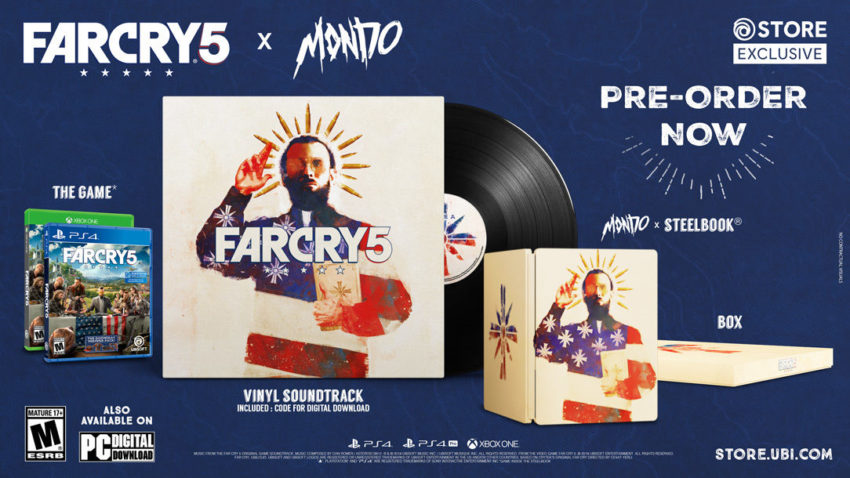 Buy the x Mondo edition if you like collectible art.

The Far Cry x Mondo edition is $99 and available through the Ubisoft Store. It makes the least amount of sense for most gamers. Unless you are a huge fan of Mondo. This includes the base game, the soundtrack on Vinyl and a unique, exclusive and limited Steelbook designed by Jay Shaw, Creative Director of Mondo. You also get special packaging and a code to download a digital version of the game. 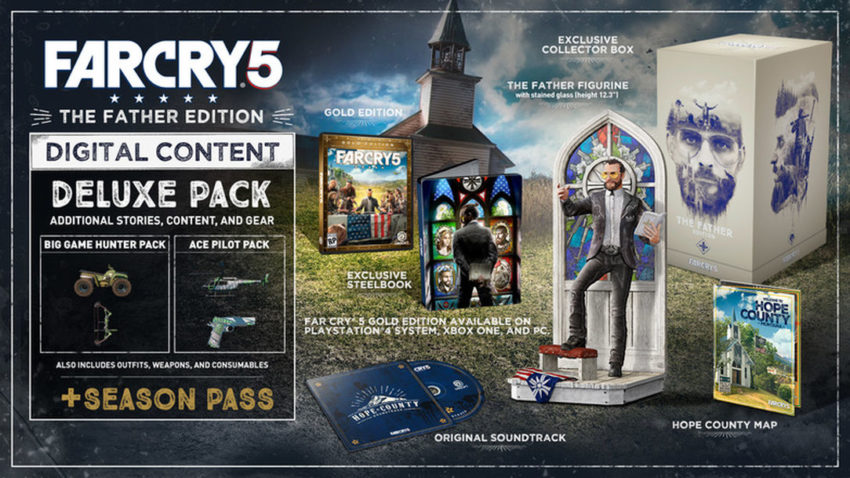 Do you like real world special edition bonuses? Here’s one to look at.

The Far Cry 5 Father Edition is $159.99 and it is another special edition with real world collectibles, but at least you get the Gold edition of the game. With this speical edition you get the following items;

This is only available through Ubisoft and it’s another item for hardcore fans, so there are no deals on this version. 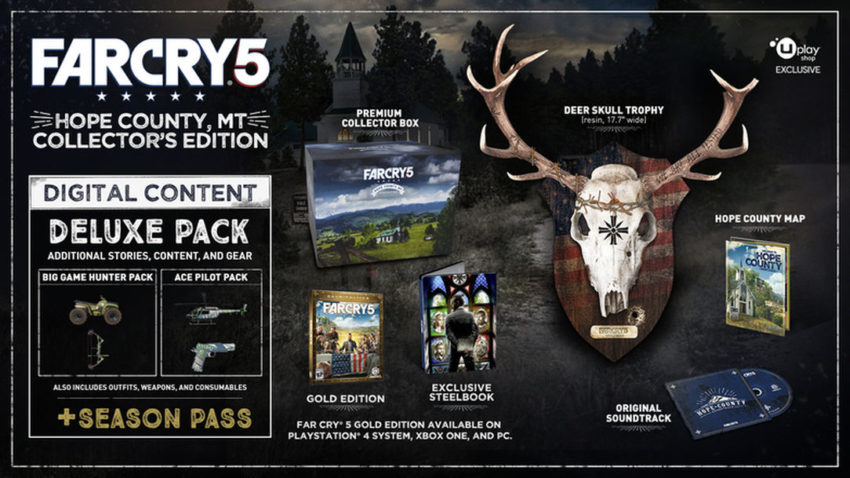 You also get the original game soundtrack and a Hope County Map. the physical collectible is a 17.7-inch Deer Skull Trophy that is numbered 1 to 6,000. You can only buy this through the Ubisoft store and it’s reserved for the biggest fans, who also happen to have a wall to show off the deer skull trophy.

Which Far Cry 5 Edition to Buy?

Most gamers should choose between the Far Cry 5 Standard Edition and the Gold Edition (with or without SteelBook). Both of these offer a lot of value and there are deals to be found on both of these versions.

If you think you will beat the game and move on, go for the Standard edition of Far Cry 5. If this is the type of open world game you come back to, then pick up the Gold Edition with Season Pass. This opens up extras on day one and it means you’ll get new content over the life of the game. We know that this includes stories, weapons and content, but not exactly what it will include yet.

If you buy at Best Buy you can save $30 off the Gold Edition with SteelBook with Gamers Club Unlocked, knocking the price down to $69.99 after you factor in the $10 reward.