Samsung’s new Galaxy Note Edge is a concept phone and one that should be intriguing to those that are looking to upgrade to a high-end smartphone. Samsung’s Galaxy Note Edge specs include a Quad HD resolution, a 2.7 GHz Quad-core Snapdragon 805 with 3GB of RAM, Android 4.4.4 KitKat with Samsung TouchWiz, 16MP camera with Optical Image Stabilization, massive battery, and a thin 8.3mm frame. It also comes with an S Pen stylus.

NTT DoCoMo and KDDI will both stock the white Galaxy Note Edge starting tomorrow, November 13th. Those interested in picking one up will be able to do so through their online portals. Those who are looking to buy in store would be wise to call ahead and confirm availability. We’ve seen stock shortages impact certain prefectures in Japan so there’s no telling how much they will have in stock tomorrow.

In late October, Korea became the second region to release the Galaxy Note Edge. SK Telecom and KT are both offering the black and white Galaxy Note Edge models. The carriers will charge 1,067,000 South Korean Won which amounts to over $1000 in U.S. currency.

China is supposedly going to be among the initial Galaxy Note Edge release markets, joining the U.S., Japan, and Korea. Samsung still hasn’t divulged any specifics which means that consumers there only have a little bit to go on as we head deeper into the month.

We’ve seen Galaxy Note Edge models get certifications for the Chinese market so it’s simply a matter of when at this point. Given that we’ve already seen two models arrive, we could potentially see some movement here in November.

AT&T, Sprint, T-Mobile, and Verizon all confirmed the Galaxy Note Edge for arrival back in September. Several days ago, Samsung once again confirmed all four of those carriers and added a fifth, the United States’ fifth largest carrier, U.S. Cellular.

AT&T is currently carrying the Galaxy Note Edge at select locations. It’s also taking pre-orders ahead of a November 13 ship by date that should coincide with a wider release on November 14th. AT&T is charging an arm and a leg for the phone, $399.99 on-contract and well over $900 off-contract. 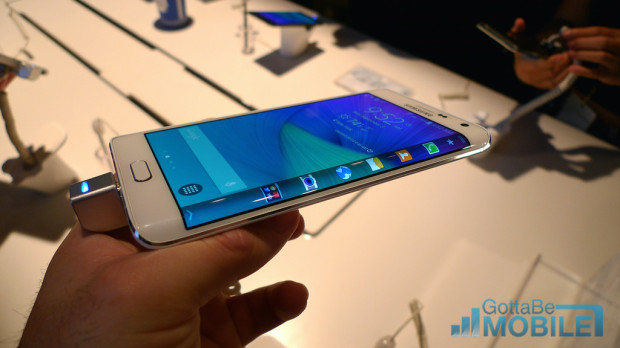 U.S. Cellular and Verizon still haven’t announced any specific details. Yesterday, we saw the U.S. Cellular Galaxy Note Edge cruise through the FCC, a sign that an announcement should be close but thus far, we haven’t heard anything about a release date or a price. The Verizon Galaxy Note Edge is in worse shape. It has cleared the GCF but it hasn’t cleared the FCC. What this means is that there is a good chance it won’t arrive this Friday.

This shouldn’t come as too much of a surprise given that Verizon is almost always last to mainstream smartphones. It recently released the Galaxy Note 4 a week after its rivals so we could see something similar here.

Nothing has changed for the Canadian market and we probably won’t see Samsung Canada get the device out in 2014.

Weeks ago, Samsung Canada confirmed a 2015 release date for the Galaxy Note Edge. It did not provide any specifics and simply said that the region would be behind the U.S. release date for unspecified reasons. Canada typically releases smartphones in close proximity to the United States so this release delay is extremely surprising. We still don’t know where it will head but major carriers like Bell, TELUS, and others are a safe bet.

One carrier, Vodafone, says that there are long wait times for the Galaxy Note Edge. It also still lists the device in a pre-order and not a general sale so it’s not clear if the device is actually in stores or not. Again, we advise our Aussie friends to check in with specific carriers for release details. They may be able to shed some more light.

In October, Samsung confirmed a Galaxy Note Edge release for India. The company did not specify any specific details but did say that a release before the end of the year in the one the world’s biggest markets. We still haven’t see any details emerge and so it looks like this variant is still on pace for 2014. Look for more details to emerge this month.

While this is still not confirmed, Denmark, Germany, The Netherlands, Luxembourg, Spain, Italy, Switzerland, Poland, France, Nordic countries, Austria and Portugal should all be getting the Galaxy Note Edge at some point in the future.

According to AllAb0utSamsung, Germany will be releasing a Galaxy Note Edge Premium Edition that includes a flip wallet, cleaner for the display, three year warranty, a manual that outlines tips and tricks, and a 64GB microSD card. The first 500 buyers will also get free dinner and a tour of Samsung’s headquarters in Schwalbach.

The United Kingdom will also get the Galaxy Note Edge at some point but it’s not clear when it will be released. Samsung United Kingdom continues to say that it will confirm the release date at a later date.

Kazakhstan, Singapore and Nepal are expected to get the Galaxy Note Edge down the line as well though it’s not clear when the device will arrive. We expect more details to emerge in the weeks ahead as Samsung ramps up production.