The Google Pixel 2 and Pixel XL 2 release date is less than two months away, and now we know the official launch date. Following months of leaks and rumors, today we received confirmation that Google will unveil two brand new phones on October 4th. Here’s what we know so far.

Google will host an event in San Fransisco on October 4th, and sent invites out to select members of the press. And while the invite doesn’t specifically mention the new Pixel 2, that’s exactly what we expect to see.

With the Galaxy Note 8, iPhone 8, and iPhone X all behind us, Google’s upcoming Pixel phones are two more exciting options for potential buyers. This is Google’s second attempt at a smartphone that can rival Samsung and Apple. We’ll know more in just a few weeks.

Google’s teaser video above gives us a small idea of what to expect from the Pixel 2. Saying things like “What’s wrong with my phone’s battery?” or “Why is my phone always out of storage?”. Then hinting at potential features by asking “Why does my phone take so many blurry photos?” “Why doesn’t my phone understand me?” and “Why can’t my phone update itself?”.

Next, Google essentially confirms that these questions are valid points. Stating that it’s funny we should ask, because their solution is coming on October 4th. The new Pixel XL 2 will offer improved battery life, an excellent camera, automatic updates thanks to Android 8.1 Oreo, and the Google Assistant.

In recent months, countless leaks and rumors gave us a good idea of what to expect. Additionally, Google’s LG-made Pixel XL 2 recently hit the FCC. One more hint that these new phones are coming soon. So what will Google deliver in October and what can you expect?

On October 4th Google will likely unveil two brand new smartphones. Following a similar design and approach as the original Pixel from October 2016. Here’s everything we know so far. The first being the Pixel 2, made by HTC, features a familiar design with big bezels like the original Pixel. Basically an upgraded version of Google’s first Pixel smartphone. 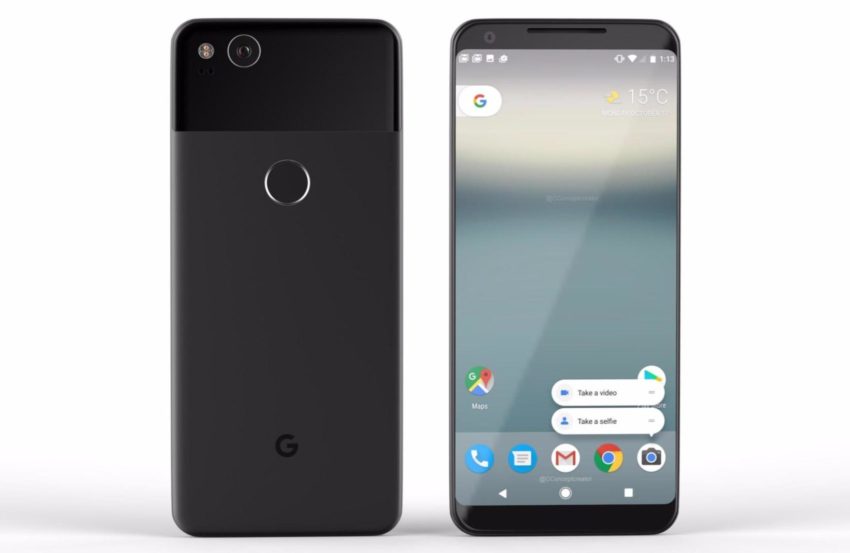 Fan-made concept of the Pixel XL 2

However, it’s the new and improved Pixel XL 2, made by LG, that has potential buyers excited. While the image above is just a fan-made render, it’s based on trusted leaks. Suggesting Google will deliver a phone with a 6-inch edge-to-edge OLED display similar to the new iPhone X. That said, it won’t have a big gap in the screen for the sensors. Instead, it will feature a more traditional rectangle display similar to the Galaxy Note 8 or LG V30.

So far we’re hearing Google’s Pixel XL 2 will have a curved Quad-HD OLED display, a powerful Snapdragon 835 processor with 4-6GB of RAM, 128GB of storage, and a single yet vastly improved 13MP rear camera. We also expect Android 8.1 Oreo to debut on the Pixel 2. Additionally, these phones are IP68 dust and water-resistant, but don’t have a 3.5mm headphone jack.

Either way, we only have a few more weeks to wait before Google officially unveils the new Pixel 2 and Pixel XL 2. Following the October 4th announcement, many expect a release date around October 20th. Stay tuned for more details.