The Star Wars Jedi: Fallen Order release date is finally here and that means Xbox One and PS4 owners can download the game. As expected, the game requires a pretty sizable chunk of free space.

Respawn’s entry into the Star Wars world is about to launch on the Xbox One, PlayStation 4, and Windows PC. The game unlocks at Midnight Eastern.

Unlike Star Wars Battlefront, Star Wars Jedi: Fallen Order a single-player game without a multiplayer mode or micro-transactions. You can expect a pretty expansive campaign.

With that in mind, it should come as no surprise to learn that the game requires a significant download for all three platforms. It’s not as big as Red Dead Redemption 2, but it’s still fairly big.

If you’re playing the game on Microsoft’s Xbox One, the game file is approximately 43.76 GB.

If you’re playing it on a PlayStation 4, Sony notes that you’ll need a minimum of 60GB available though the actual download is much closer to the 40GB mark.

If you’re running out of space on your console, and you want to play right away, you should dig through your storage and delete files you no longer need.

If you’re running out of space and you don’t want to get rid of anything, you should consider investing in an external hard drive. It could help.

Samsung’s T5 Portable SSD is one of our favorites, but it’s on the expensive side. If you don’t want to spend a ton on an external hard drive, you should take a look at the WD My Passport 4TB.

Mileage will vary based on connection speed, but a 40+GB download is probably going to take over an hour for a lot of you. For some of you, it could take multiple hours.

If you’re trying to download the game the second it’s released or if you’re using a slow Wi-Fi connection, you’ll need to remain patient. 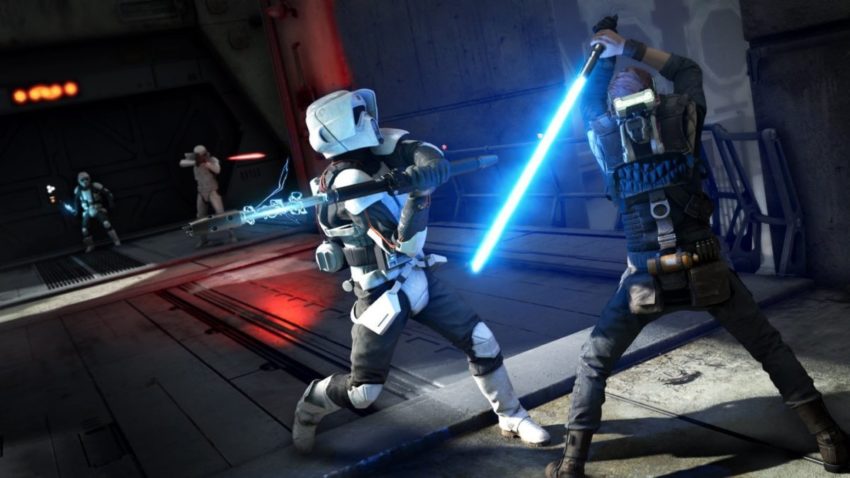 If you’re curious how long Star Wars Jedi: Fallen Order might take to download on your connection, you can use this tool to approximate the amount of time the download will take to finish up.

It’s not an exact science, but it will help you plan ahead and set realistic expectations for the game’s download time.

Pre-loading Star Wars Jedi: Fallen Order allows you to start playing right when the game goes live at 12AM Eastern on November 14th.

That’s 9PM Pacific for those of you on the west coast.

You’ll also have to download a day one patch which obviously increases the installation time.

The Star Wars Jedi: Fallen Order day one patch includes stability improvements and bug fixes. We strongly recommend downloading the patch before firing up the game.

The game’s day one patch is less than 1GB so it shouldn’t take too long to download. In many cases, it will take less than 10 minutes.