Star Wars Jedi: Fallen Order is official and the game is now on sale ahead of a release later this year. There are a few versions of the game up for pre-order so you’ll want to pick the right edition for your interest level and your budget.

Respawn Entertainment, the developer behind Apex Legends and the Titanfall series, has revealed a brand new entry in the Star Wars video game series.

Star Wars Jedi: Fallen Order is the new title and unlike Star Wars Battlefront, it’s a single-player game without a multiplayer mode or micro-transactions.

Assuming the game doesn’t get delayed, it will arrive just ahead of the holidays on November 15th. This is the release date for Xbox One, PlayStation 4, and Windows PC. EA and Respawn haven’t announced a version for Nintendo Switch.

Now that the game’s official, retailers are officially taking pre-orders for the highly anticipated game. And given that this is a Star Wars game, many people are trying to decide if it’s worth a pre-order.

If you do decide to pre-order a copy of Star Wars Jedi: Fallen Order, you’ll be faced with a decision: Buy the standard version of the game, snag the Deluxe Edition, or go with one of GameStop’s exclusive Black Series Figure Bundles.

In this guide we’ll take you through each version of Star Wars Jedi: Fallen Order and help you decide which version is the right one for you.

For $60 you get the standard version of Star Wars Jedi: Fallen Order. This is the no-frills edition and you get the least amount of bonus content. 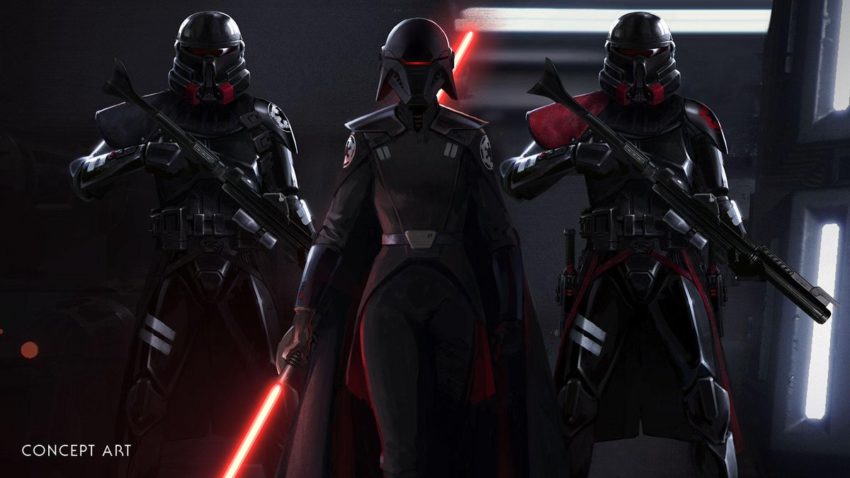 The standard edition comes with a copy of the game and if you pre-order you’ll get some unique cosmetic items for your lightsaber and droid companion. If you pre-order the game for PS4 you also get a game-related theme.

If you don’t want to pay the full $60 for a copy of the game, make sure you keep an eye out for deals as we push toward the game’s release date in November. We often see retailers offer a few bucks off ahead of time.

Best Buy says that My Best Buy members who pre-order will get $10 in rewards certificates which is a tempting proposition if you plan to buy more than one game this year.

If you’re an EA Access, Origin Access Basic, or Origin Access Premier member you can take 10% off the cost of a digital copy of the game. Origin accounts require a subscription.

This is the most basic version of Star Wars Jedi: Fallen Order but it’s the version most people should buy.

Who should buy this edition of Star Wars Jedi: Fallen Order?

You can buy the standard version of the game at Amazon, Best Buy, GameStop, the Microsoft Store, NewEgg, and the PlayStation Store.

If you’re a huge Star Wars fan and don’t mind paying a little extra for some additional goodies, think about buying the Deluxe Edition for your platform of choice. 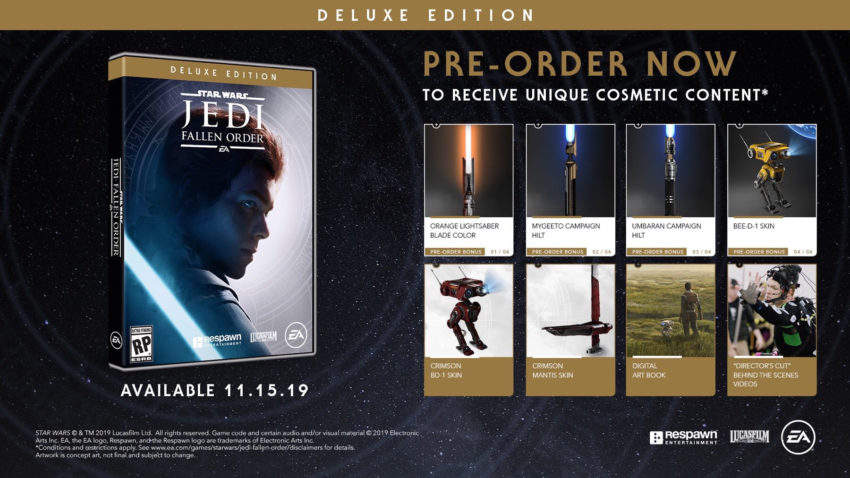 The Deluxe Edition is $70 and it nets you the pre-order bonuses plus some additional items. These include a “Director’s Cut” suite of behind-the-scenes features and content, a Digital Art book, and some in-game items including a Crimson BD-1 Skin and a Crimson Mantis Skin.

So who should spend the extra money on the Deluxe Edition?

You can buy the Deluxe version of the game at Amazon, Best Buy, GameStop, the Microsoft Store, NewEgg, and the PlayStation Store.

If you’re a rabid fan of the Star Wars series you might want to buy the game’s Black Series Figure bundle which is exclusive to GameStop.

The Star Wars Jedi: Fallen Order Black Series Figure bundle is $83 and you get a 6-inch-scale action figure with your purchase. We don’t know what the figurine looks like yet.

For $10 more you can snag the Deluxe version of the Black Series Figure bundle. It comes with the figure and everything in the Deluxe Edition.

These editions are aimed at collectors and big fans of the Star Wars series. Most people should go with the standard version or the Deluxe Edition.

Star Wars Jedi: Fallen Order comes in digital and physical formats. There are some key differences between the two and you’ll want to buy the right one for you and your situation at home.

Here are a few reasons to go with the digital version of the game:

Here are a few reasons to consider going with a physical copy of the game: