OnePlus 8 and OnePlus 8 Pro pre-orders sold out at OnePlus within minutes which means the new flagships will be hard to find for a few days.

Earlier today, OnePlus put its highly anticipated flagships, the new OnePlus 8 and OnePlus 8 Pro, up for pre-order on its website. The company offered a very enticing launch day bundle with a free pair of $50 headphones and a Warp Charge 30 Wireless Charger which normally retails for $70.

Apparently the phones, and bundle, were hard to resist as the company sold out of its entire “limited” launch stock just minutes after orders went live.

As of right now, all OnePlus 8 and OnePlus 8 Pro models are sold out (that includes all colors and storage options) through the company’s website and we don’t anticipate them returning until their release dates later this month.

It’s unclear how much stock OnePlus had on hand for these limited pre-orders, but it’s clear there’s quite a bit of demand for these phones so we could see stock issues plague these devices later on this month.

If you missed out this morning and you want to pickup a OnePlus 8 or OnePlus 8 Pro in April, you’ll have a few options at your disposal and we want to run all of those down in this guide.

Before we get into it, here’s what you need to know about the OnePlus 8 and OnePlus 8 Pro release dates.

Amazon will start selling the OnePlus 8 Pro on Wednesday April 29th. And while the device will work on Verizon and T-Mobile, the carriers won’t sell this version of the phone. 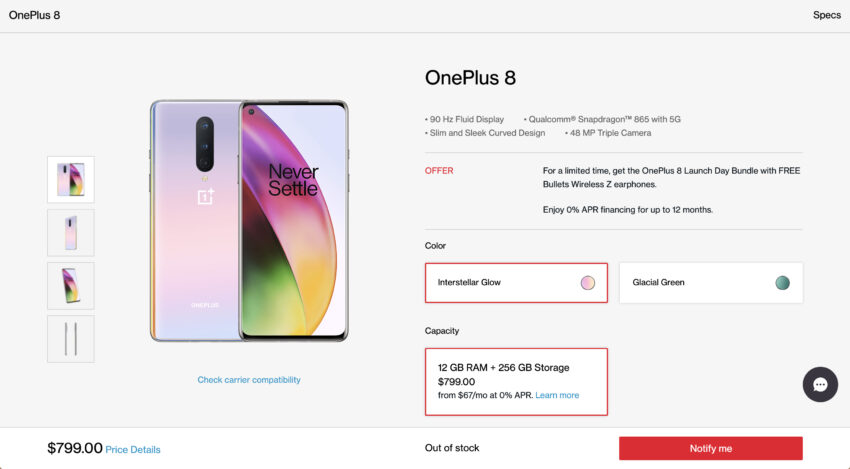 If you want to be notified when OnePlus 8 and OnePlus 8 Pro stock is available on OnePlus’ website, you’ll want to head to the landing page for the model you want and click the big red “Notify Me” button in the bottom right corner. From there, you’ll need to input your email address.

When the product you’ve selected is available for immediate shipping, you should get an email from OnePlus.

Again, while the OnePlus 8 Pro will work on T-Mobile and Verizon, the carriers won’t sell it. However, they will both sell the OnePlus 8.

Verizon says it will start selling the OnePlus 8 on April 29th. It will offer the onyx black version of the phone and Verizon-exclusive: a polar silver-colored option.

Note that Verizon calls the phone OnePlus 8 5G UW. UW stands for “Ultra Wideband” which means it will work on the carrier’s ultra wideband 5G network

As for T-Mobile, it will also start selling the phone on April 29th. It has the exclusive on the device’s interstellar glow color.

If you plan to purchase the OnePlus 8 through T-Mobile or Verizon, and you want your new phone ASAP, we recommend ordering as soon as the device goes live.

If you can’t find the shipping time you want through OnePlus, Amazon, Verizon, or T-Mobile you can also check through resellers like eBay for faster shipping times.

That said, a lot of listings will likely require you to pay a premium so choose wisely.