This is How Verizon Prepares for Hurricanes and Natural Disasters

When hurricanes, tornadoes and wildfires strike, Verizon is ready to keep customers and first responders connected.

This plan includes cell towers on drones, a satellite cell tower that can get first responders connected within 20 minutes of parking, cell towers on trucks and a backup plan to keep their towers online.

If you’re familiar with the old prepper mantra, “Two is one and one is none.”, you have a good idea of how Verizon prepares for hurricane season year round, and how they respond to other disasters.

Speaking with Verizon at an undisclosed switch location I learned that the goal for network uptime and reliability is 99.9%. At that time they were at 99.986% and they weren’t satisfied with that number.

When dealing with a natural disaster, Verizon needs to keep connections online, power to cell towers and their routing centers, and they need to bring in resources to replace towers that are damaged by nature.

In undisclosed locations across the country Verizon switches route calls and data requests from the towers to the right location. The building I visited is an F2 rated building, and in other locations where more severe weather is common there are F5 rated buildings. There’s even a location secured away in a cave.

Verizon uses a moat and castle approach to these buildings to make sure building damage doesn’t get to the important parts of the building. A wide hallway (the moat) and exterior offices protect the castle, where all the routing and networking equipment is located. This protects the tech that keeps you online from going offline due to an exterior wall crashing in under wind, debris and also from other attacks on infrastructure.

The Switch location includes two Fiber connections that enter the building on opposite sides for added redundancy. That’s what keeps the switch online, but that’s not the only redundancy. This location includes a massive battery backup, backup HVAC units and two gigantic diesel generators. The number of systems that would need to fail to take this center offline is impressive.

Heading out from the Network Switch are the towers that your phone connects to. While some towers blend in, you’ll see many of these Verizon towers on poles or on large towers as you drive around. These towers need a connection to the network and they need power. 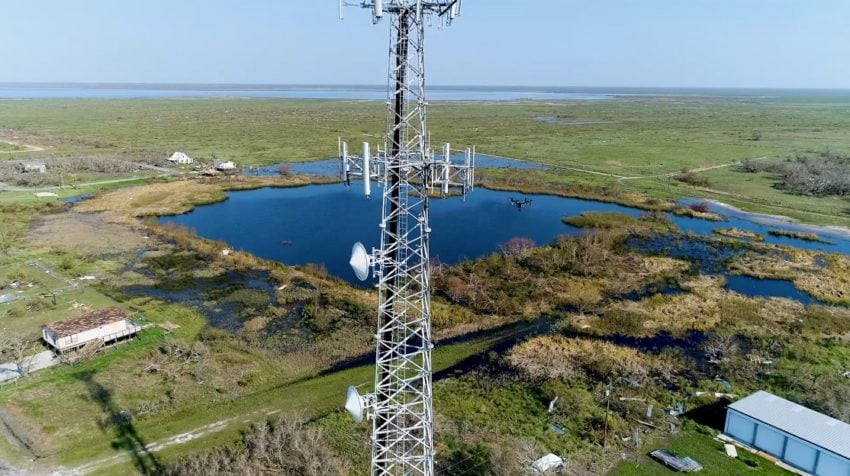 Learn what Verizon is doing to prepare for Hurricanes and other natural disasters.

Verizon keeps towers powered with battery backups and 95% of these towers include generator backups. Verizon also employs multi-disciplined engineers who are responsible for a collection of towers, delivering 24/7 coverage for any problems. During a Derecho that knocked out power for nearly a week in Ohio, Verizon was able to keep these towers online thanks to these generators.

The towers can connect back to the main network through more than one connection, so a major issue at one tower won’t bring down more towers.

The final step of the solution is temporary connection options that get you online after a hurricane or disaster and that help first responders coordinate.

Verizon can fly a drone into an area to deliver connectivity in a situation where there is no other option. The drone includes the equivalent of a small cell tower that delivers connectivity to hard hit areas.

Another amazing solution is a SPOT. This is a Satellite PICO on a Truck. This is a small trailer that Verizon can bring into a hard hit area after a Hurricane or during a wildfire and provide connectivity to first responders within 20 minutes of arriving on scene. The small truck or trailer includes a satellite connection, generator and cell tower. It can also deliver WiFi connectivity delivering much needed access to communication for first responders when minutes matter.

Other resources include Cells on Wheels, known as COWS, Cells on Light Trucks known as COLTS and Generators on a trailer known as GOATS. Verizon can bring their COWS, COLTS and GOATS to a disaster and deliver connectivity where it is needed by putting up these portable cell towers or bringing power to existing towers with a GOAT. Verizon stages on the edge of a Hurricane zone, contracts with suppliers for fuel and supplies and rolls into the damaged areas as soon as possible to keep people online, or restore service. Verizon also helps customers charge up with mobile charging stations, by opening up stores and other efforts to make sure customers can connect with loved ones.

If you’ve been to a major public event, you’ve likely already connected to a COLT or COW. Verizon rolls these out to add capacity to the network when there is a major sporting event like the Indy 500, a major golf tournament, fireworks in a major city or the Super Bowl.

By preparing with the infrastructure to survive a disaster, multi-layer backup for connectivity and power and mobile solutions Verizon is able to better keep customers connected during a disaster, and to quickly restore connectivity when the storm passes.