The Insta360 Nano 360 degree camera for iPhone is the most fun I’ve had with a camera in a long time. It produces cool images and videos at a lower price than most 360 cameras we reviewed last year like the Ricoh Theta S. 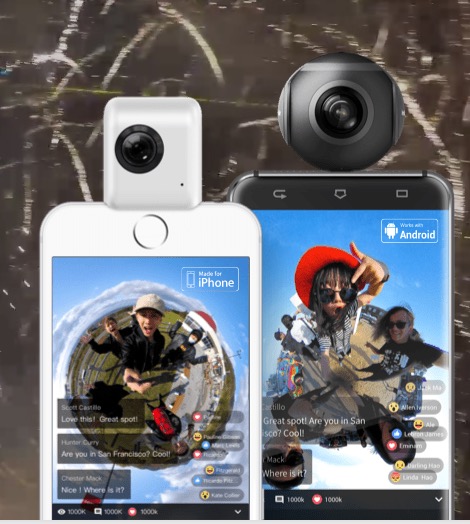 Virtual Reality and 360 degree photography and video seems like all the rage now. Plenty of apps help iPhone and Android users take 360 photos and splice them together. We’ve also seen some expensive accessories including the new Samsung’s Gear 360 camera. The Insta360 Nano ($199) camera adds 360 degree photography to the iPhone while the Insta360 Air ($129) does the same for Android. Both Insta360 cameras plug into the phone’s Lightning connector for iPhone and micro-USB or USB-C connector on Android.

The Insta360 cameras come in three forms depending on the user’s needs and budget. 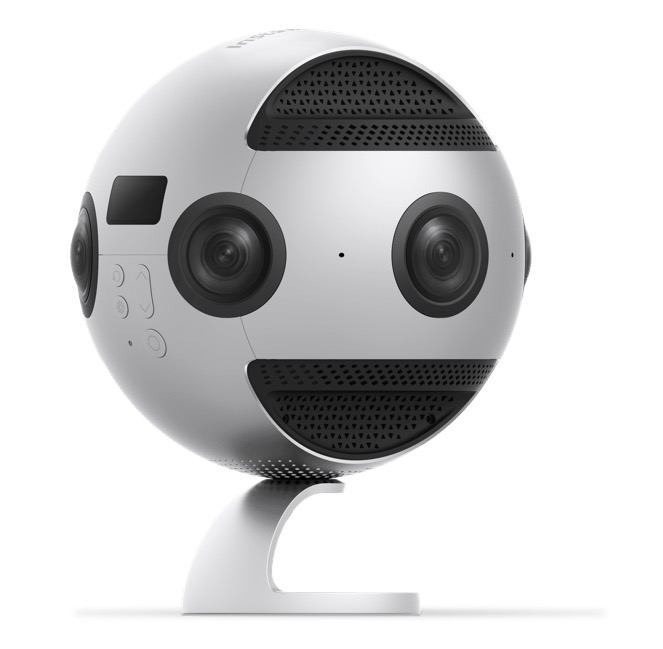 Insta360 Pro Camera for pros and consumers with plenty of cash. 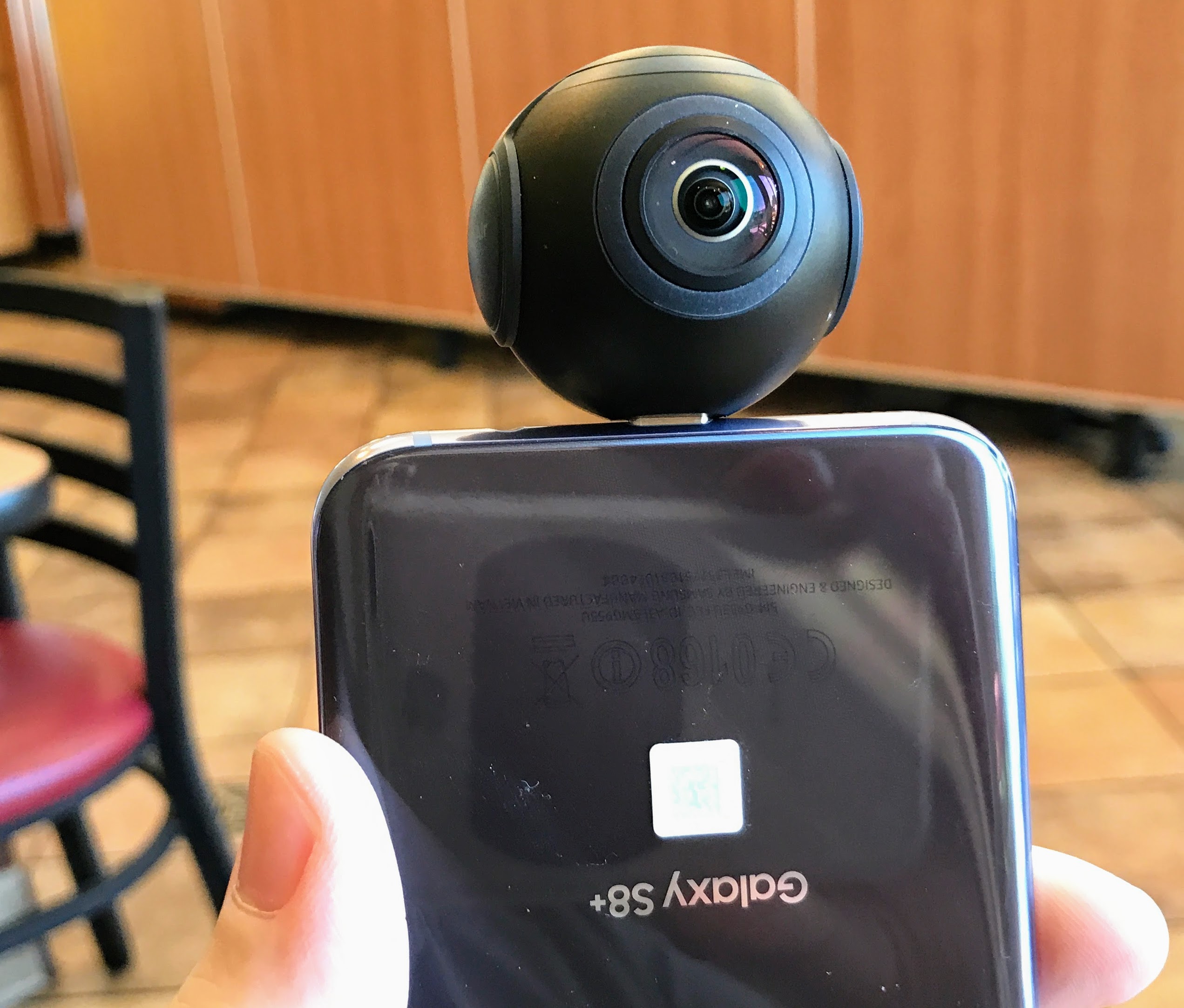 This review covers the two consumer cameras, the Air and Nano. The Pro focuses on professional users and costs more than most users would ever consider paying just for fun photos and videos. Pros that need to share 360 video of live events or for businesses. Some use it for real-estate and others for weddings to add something special to their regular photography.

What Does Insta360 Camera Do? 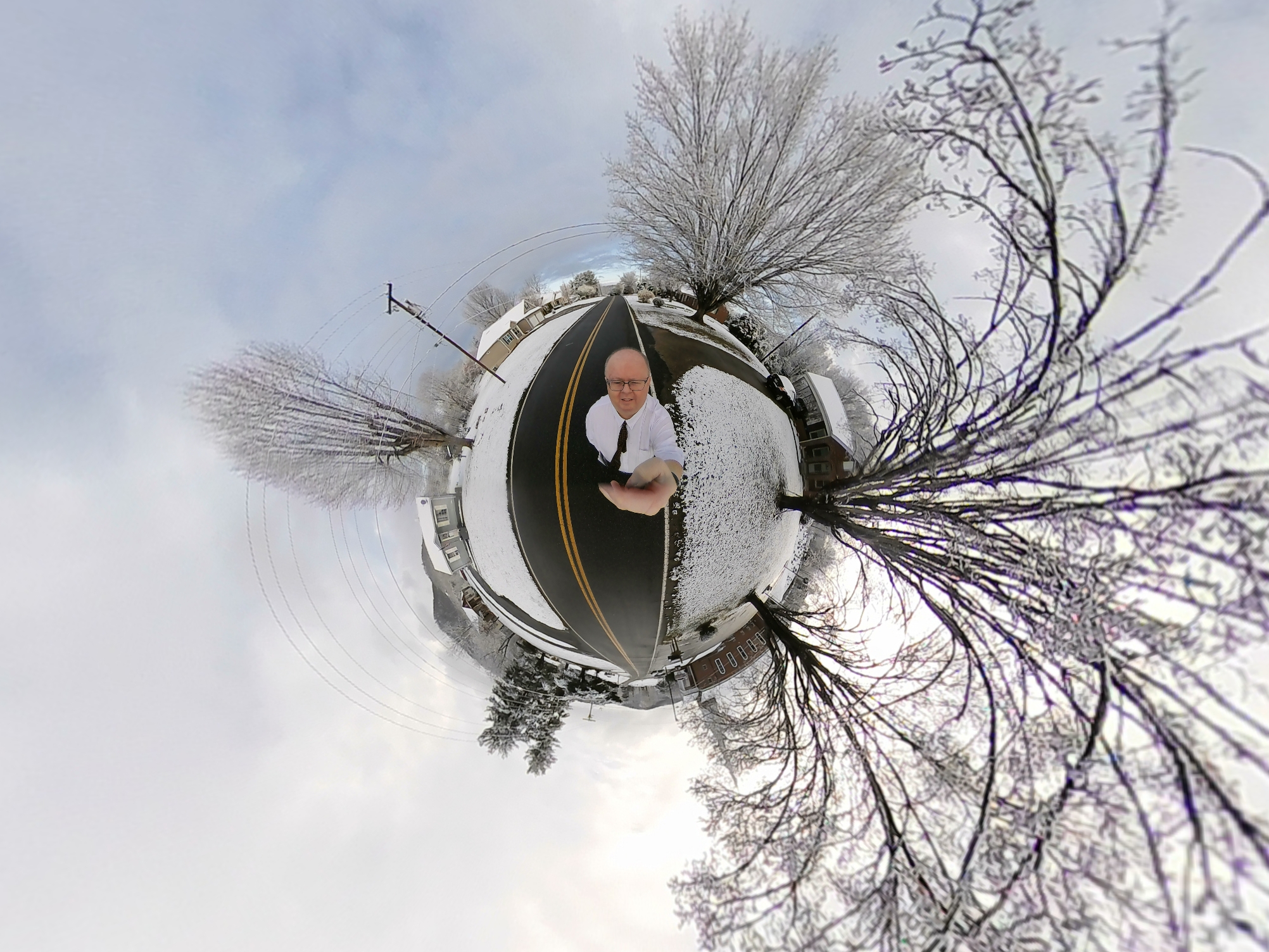 I took this shot on a snowy day with the Insta360 Air using the Little Big Planet mode.

Both of the consumer Insta360 camera options connect to a smartphone and run an app that handles all the 360 shooting. The phone controls the camera and saves the images, although users can shoot with the Nano when it isn’t connected to an iPhone thanks to a built-in rechargeable battery and a micro-SD card slot. 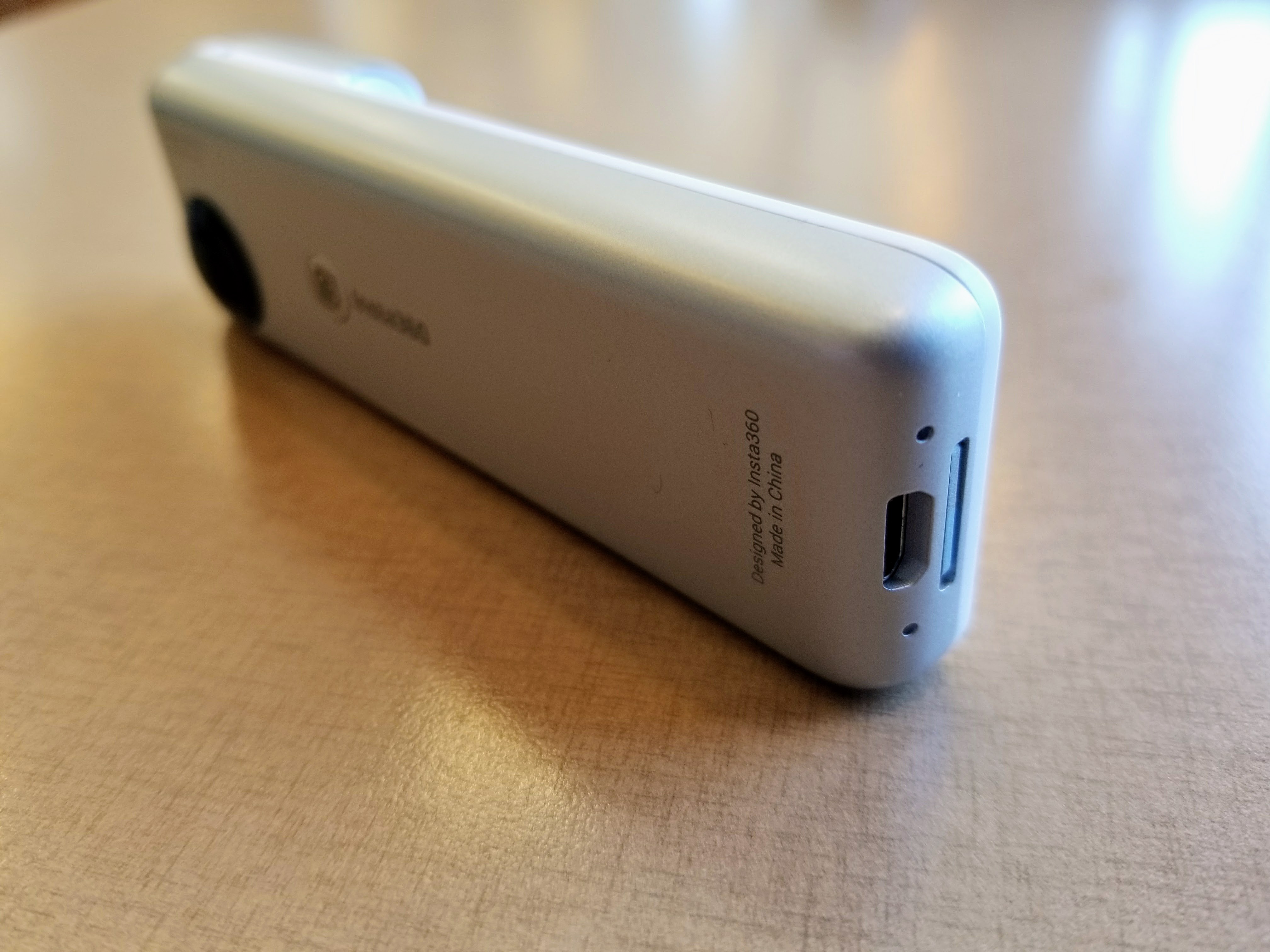 Each camera puts 2 wide-angle lenses on opposite sides of the device. The software then stitches the images together capturing 360 degrees around the camera horizontally and nearly 360 degrees of horizontal viewing. It tries to cover the camera itself with either a logo or a black spot. 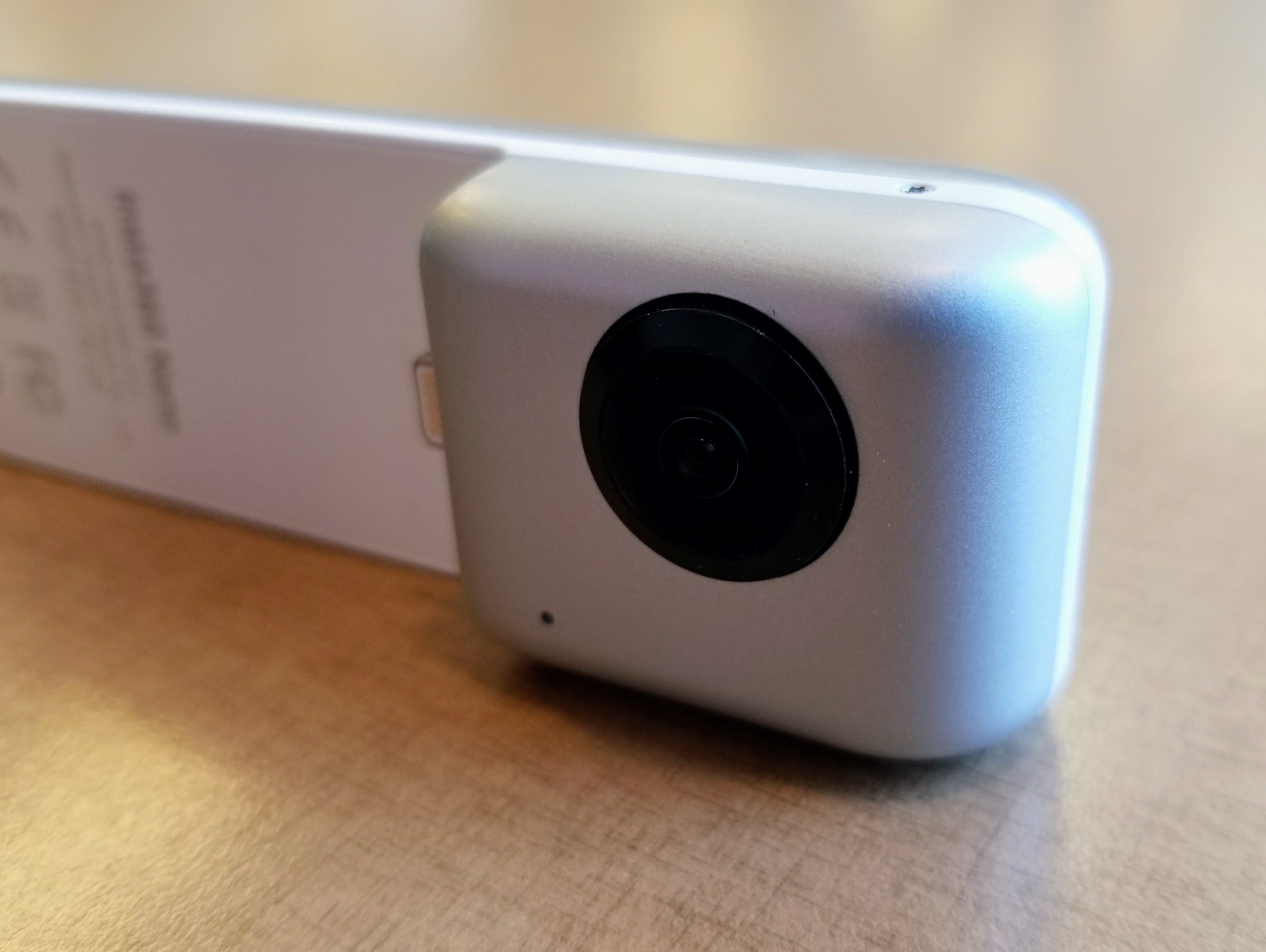 The two apps, Insta360 Nano iPhone app and Insta360 Air Android app, control the cameras while they’re hooked up to the phone. They each shoot images, videos and can go live on services like Facebook Live, YouTube Live and Periscope. Users can manually add streaming information to use other services by entering the right details about that service’s streaming details.

Both cameras connect to the bottom of the phone and the app inverts the user interface so you’re holding your phone upside down with the camera up. This take some getting used to at first. The camera also launches the app automatically once the user attaches it to the phone.

While I focus mostly on connecting these cameras to a phone, users can hook them up to their computer using an extension cable. This works better with the Insta360 Air which comes with a nice cable that holds the camera upright while connected to the computer. You’ll need the software on your Mac or Windows computer. There’s a plugin to use Adobe Premiere and Adobe After Effects to edit Insta360 videos. 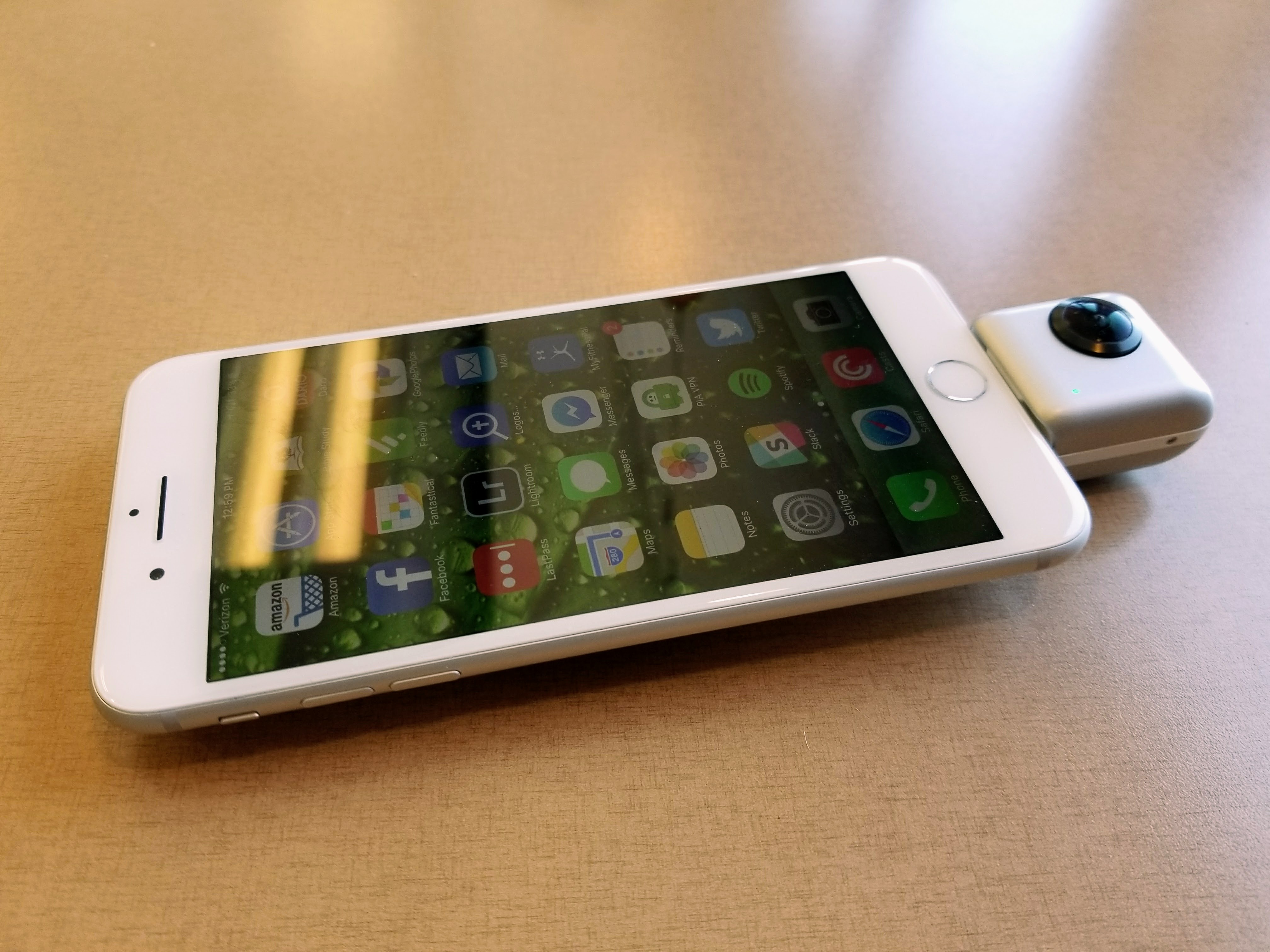 The Insta360 Nano looks sleek and comes with iPhone-style design and quality. The camera connects to the Lightning port and fits snuggly over the bottom of the phone. There’s a mic on the top of the camera for recording sound in 360-degree videos. Each lens protrudes slightly from the surface of the camera. 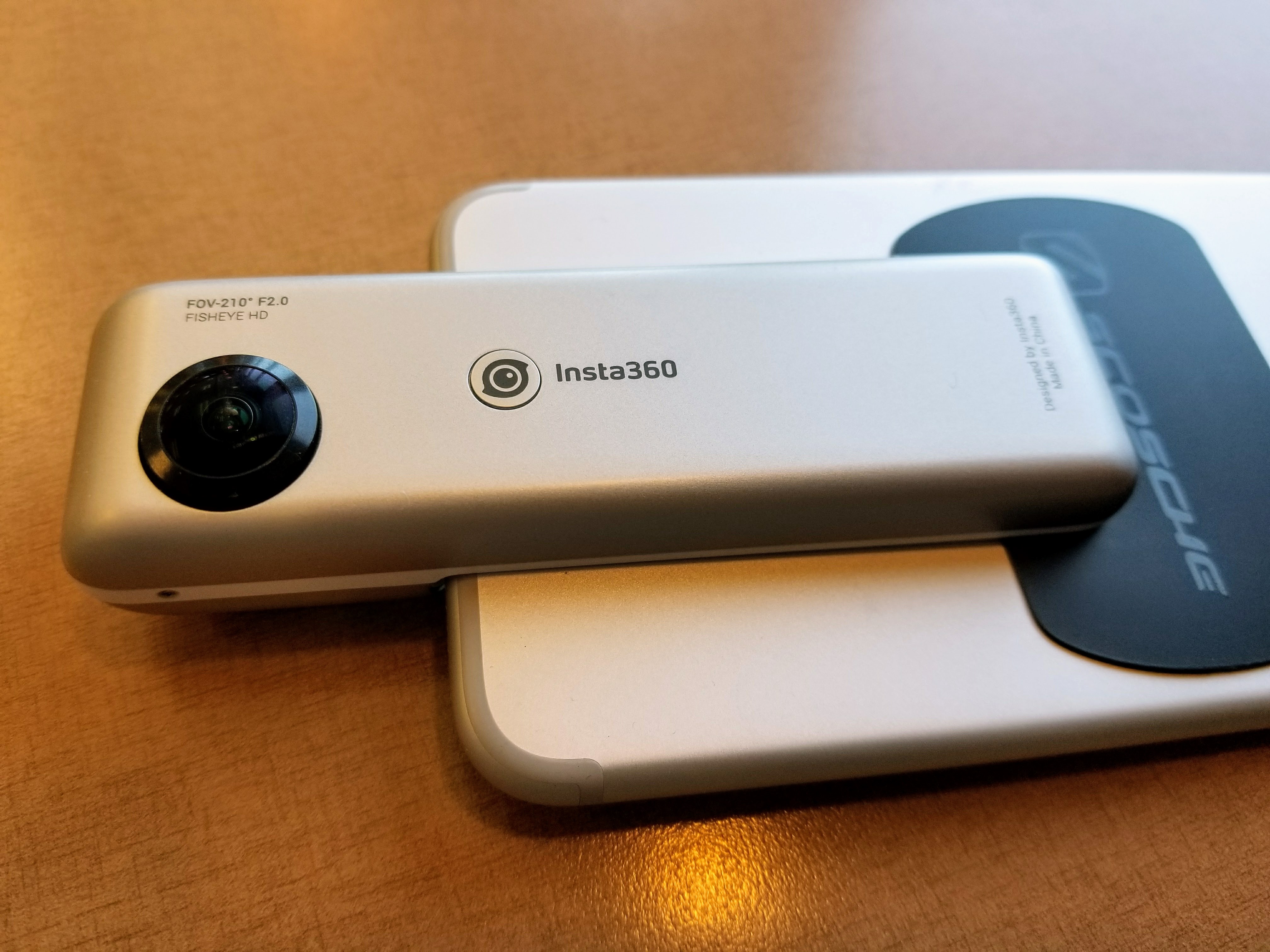 On the bottom we get the micro-USB port for charging the camera. Unlike the Android version, the Nano powers the camera with battery power. This doesn’t drain the iPhone’s battery as quickly, but forces the user to recharge the camera regularly. The battery will last long enough for a week’s worth of short shooting sessions.

The iPhone app works well and is simple to use. The camera interface has three modes, video, photo and live stream. It offers some customization like filters and there’s a stability feature for smooth shooting. When you’re ready to share photos you can save them to the camera roll on your iPhone or share them. You can also interact with other Insta360 Nano users and see their shots or videos and share yours. The app supports a VR viewing mode if you have a Google Cardboard. 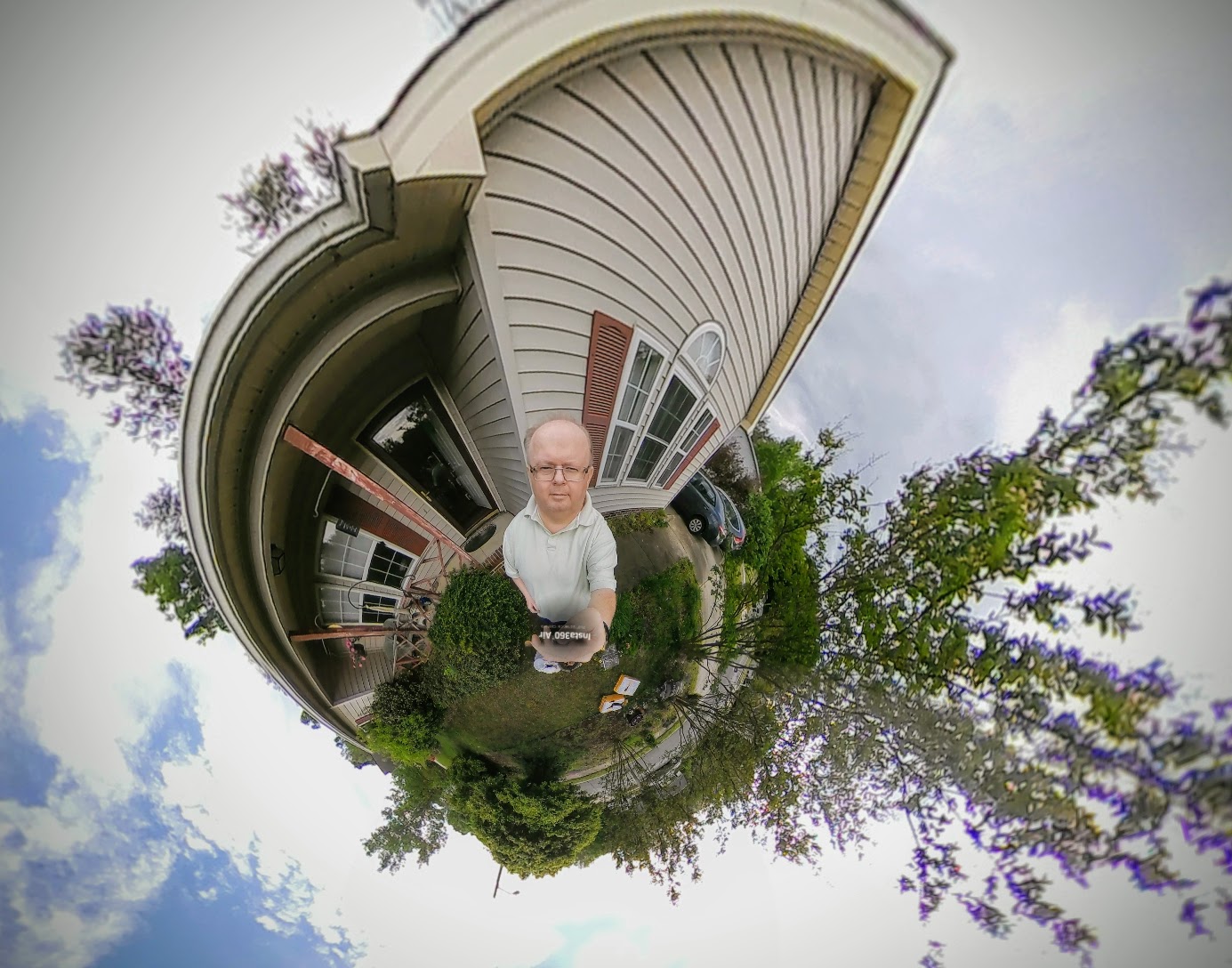 This is an example of the Little Big Planet export mode. Notice the chromatic aberration causing purple fringes on the edges.

The iPhone app is stable and works well. It’s easy to use and share photos. I like the modes of sharing. You can share them as panoramas or what they call Little Big Planet (see the sample above). You can also export a 360 image that you can view either in a VR headset or by dragging with your finger or mouse. It also shares videos in 360 that you can view on a screen or in VR headsets.

The Insta360 Nano offers the most enjoyable camera I’ve used. The shots are fun and add a wow factor to your slideshow of images from an event or place. The quality could look a little better, but at this price you get a fun and interesting photography experience with the Insta360 Nano. 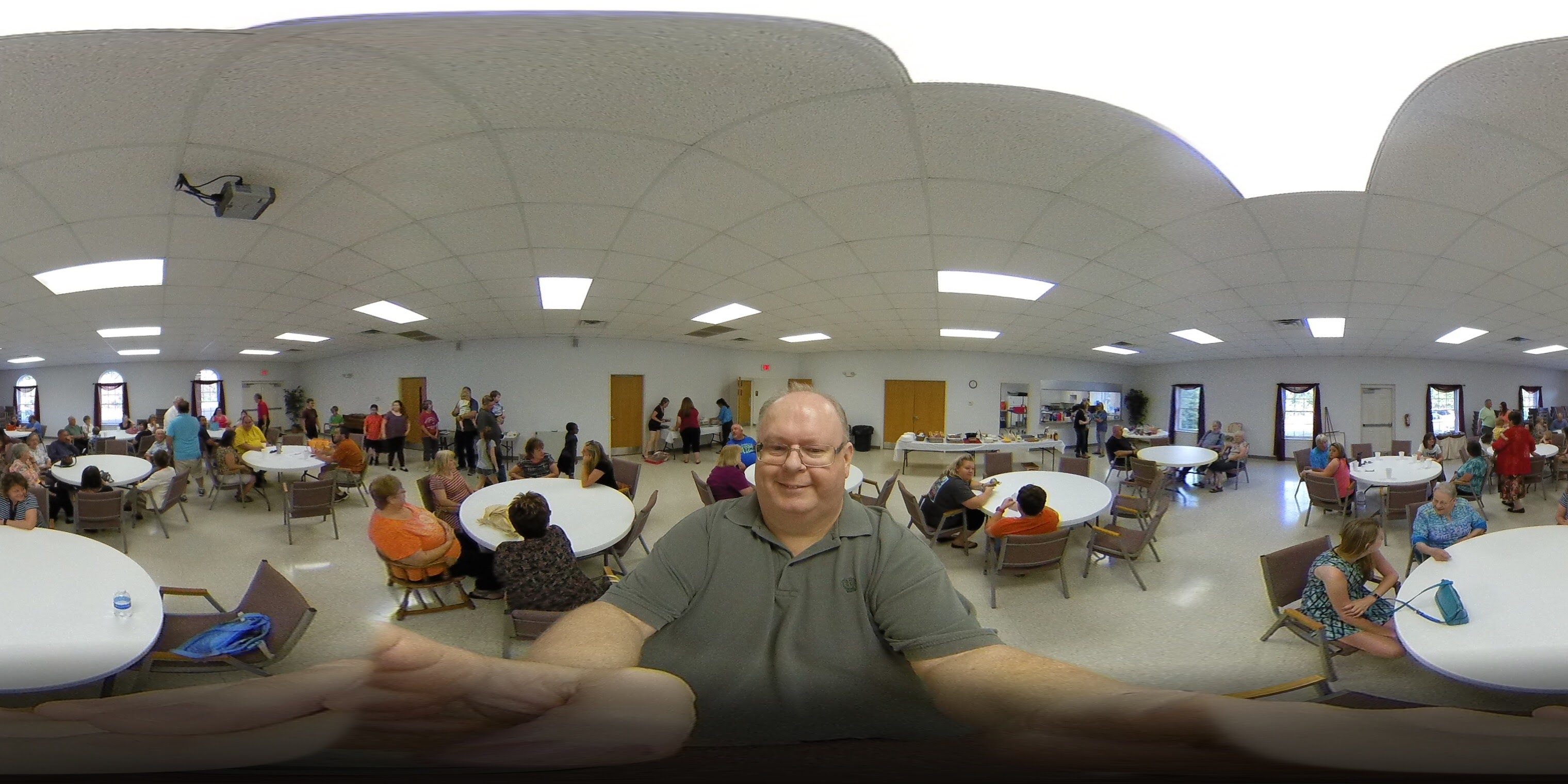 This panorama came from the Insta360 Air camera on an Android phone. 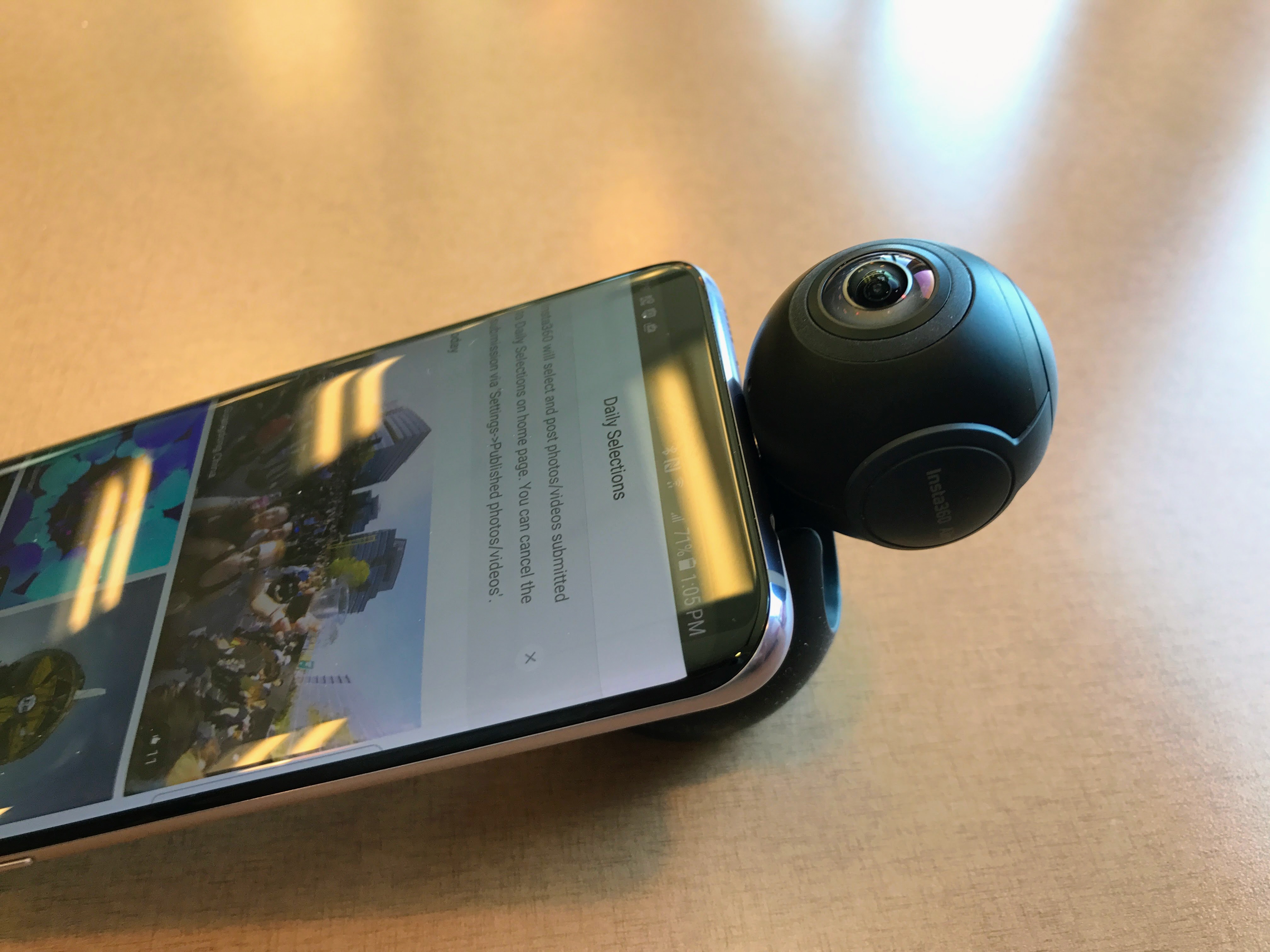 The Insta360 people designed the Insta360 Air for Android differently compared to the Nano. Instead of a sleeker design, we get a black ball with a micro-USB or USB-C connector protruding out of the bottom of the camera. It’s not as sleek and not as easy to carry around in your pocket. 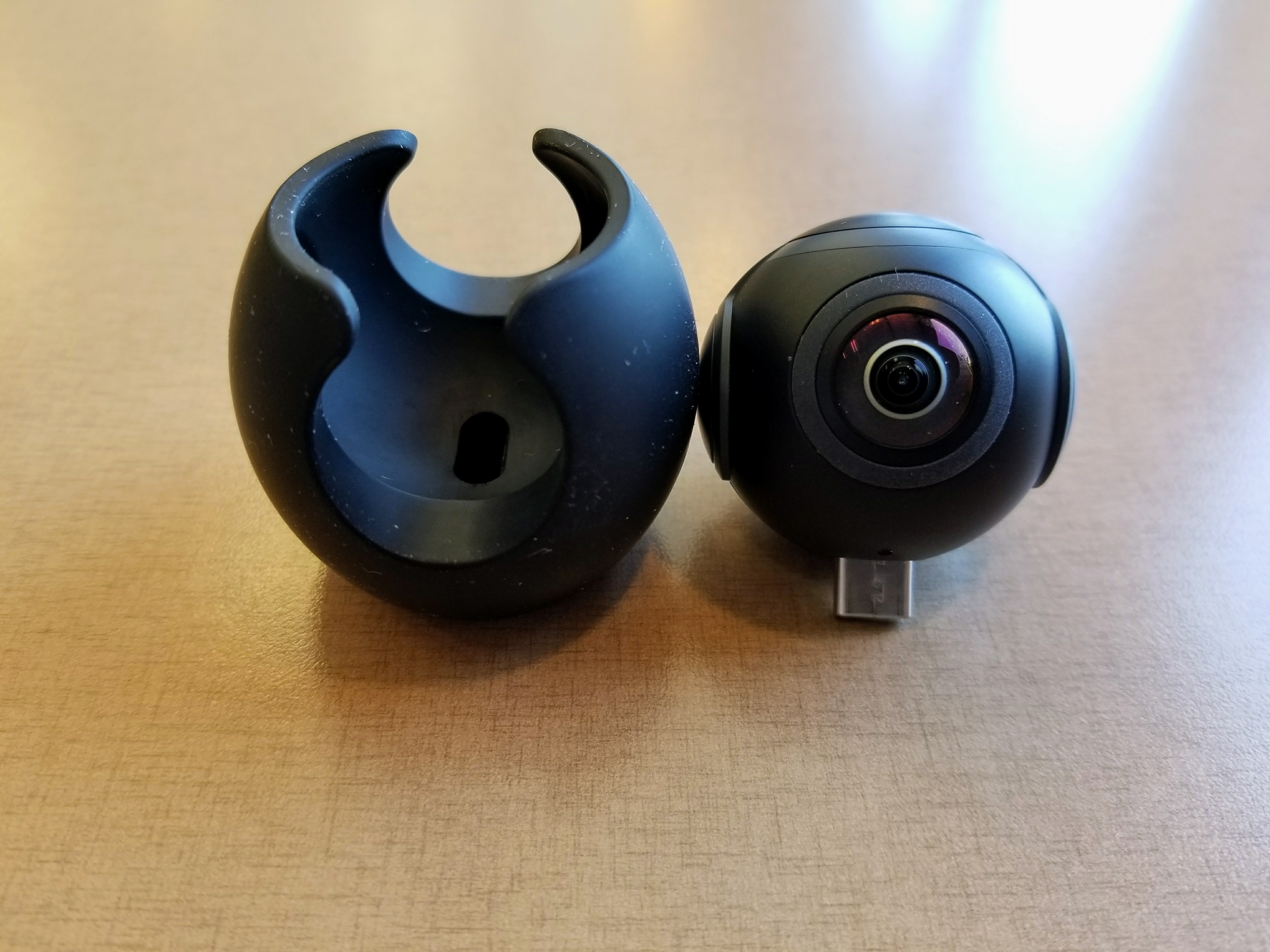 The carrying cover fits perfectly and even has a cutout so the USB-C or micro-USB connector doesn’t get in the way. There are two side cutouts so you can easily pull the sphere out of the cover.

The cover collects lint. You’ll see that even after carefully cleaning the cover, it instantly got dirty as I took the product shots for this review. 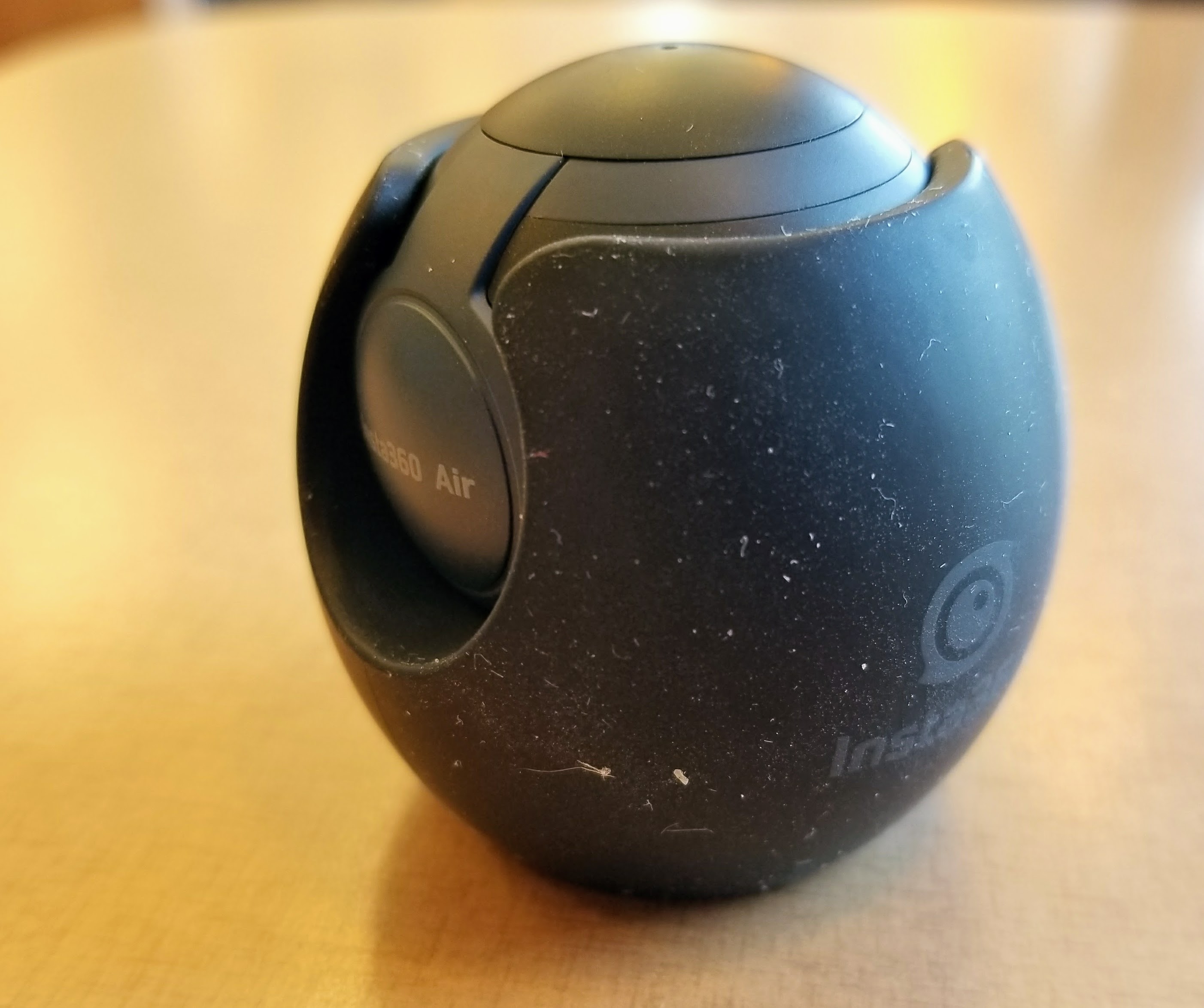 The Android App works just like the iPhone app, so I won’t add much here. If you skipped over the iPhone part of this review, then scroll up to see that above.

I wish the Insta360 folks took the iPhone design and tried to mimic it a little with the Android version. I understand that’s harder with Android accessories since so many different form factors change the way a device connects and fits. What fits nicely on a Samsung Galaxy S8 might not fit a Google Pixel or an LG G5. The big round ball of the Insta360 Air is not as easy to carry around as the sleek Nano. 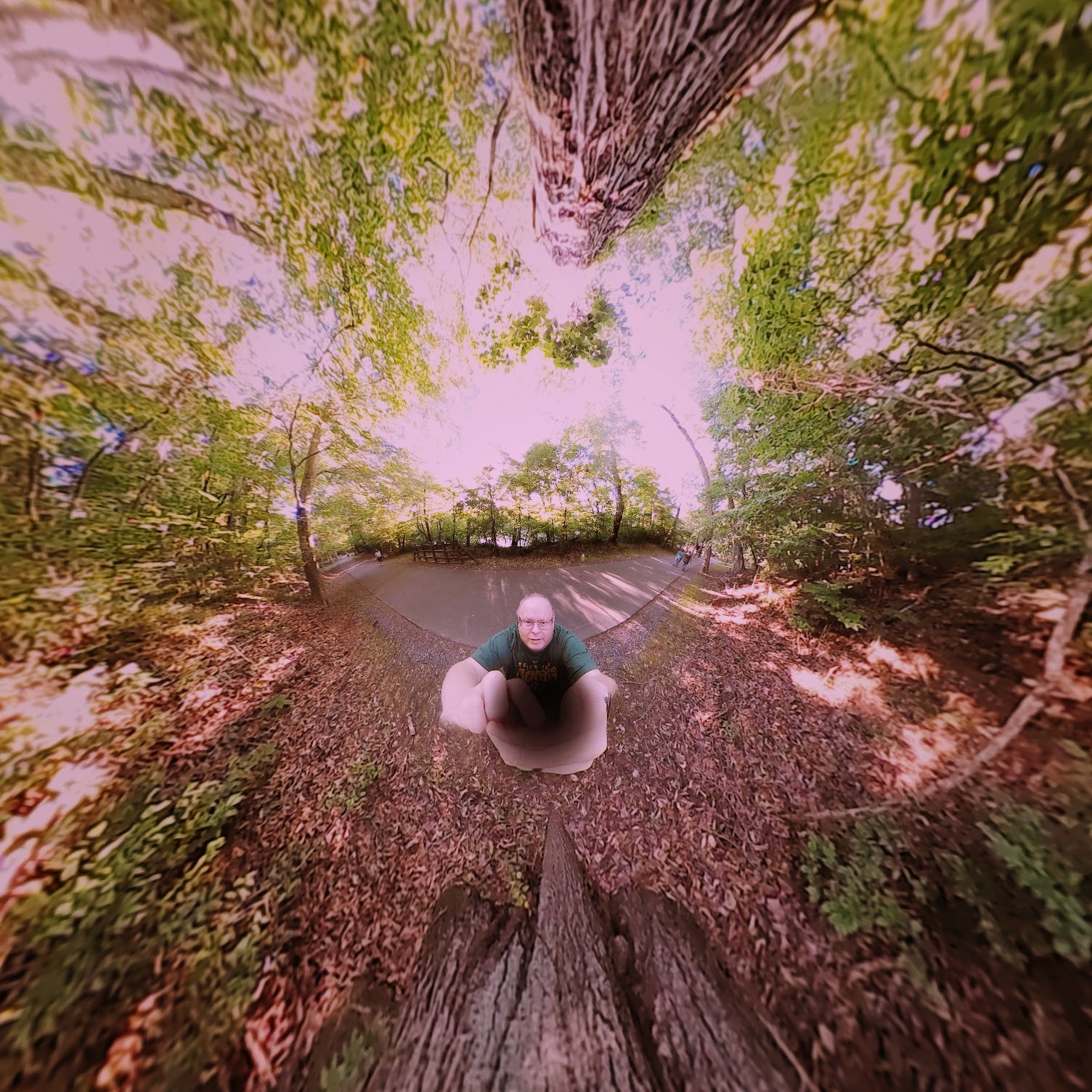 This shot shows one of the filters available in the Insta360 app.

Despite the design weaknesses of the Insta360 Air, the price is better. It costs only $129 compared to $199 for the Nano. You also don’t have to charge it since it takes battery power from the phone. However, that also means you don’t get to use it by itself without the phone attached like you can with the Insta360 Nano.

Insta360 offers a couple of other apps. The Insta360 Player will make it easy to view your 360 content on your iPhone and on your Android phone. You can sign into your account and find any videos or photos you uploaded from the phone, which lets you view them on a tablet as well.

I love these cameras. I bought the Insta360 Air when it was a crowdfunding product, but then the company sent me the Insta360 Nano review unit. I’m fortunate enough to own an iPhone 7 Plus and a Samsung Galaxy S8. Buyers will obviously pick the version that works with their phone. However, if you’re like me and own an iPhone and Android phone, then pay the extra money and get the Insta360 Nano. It’s more versatile, has a better design while working just as well as the Air. If you’re an Android only user, you still get a cool 360 degree camera and don’t have to pay as much. You can buy each camera at Insta360.com.

They produce some cool shots. Some struggle a little with photo quality and I noticed some bad chromatic aberration around the edges on a few of the shots. You also get a little pixelation. The center of the shots usually looks fine. If that’s a problem for you, then you’ll want to spend extra and get a higher quality 360 degree camera.