Here’s a look at what’s new in iOS 9.2 with a focused comparison of iOS 9.2 vs iOS 9.1 that will show you the changes that make this upgrade worth installing for many users. This is what iOS 9.2 adds to the iPhone and iPad and a closer look at the iOS 9.2 fixes that target iOS 9.1 problems.

Apple recently announced the iOS 9.2.1 update that delivers a small series of fixes to the iPhone and iPad. This small new update also improves performance on some older devices.

The iOS 9.2 release date is here and users can download iOS 9.2 directly to the iPhone or iPad to upgrade — or install with iTunes.

Users upgrading from iOS 9.1, iOS 9.0.1, iOS 9.0.2 or iOS 9 will not see many visual changes, but there are many important new iOS 9.2 features — including some that users have asked Apple to deliver for years.

With this iOS 9.2 feature breakdown we will help you see the new options and features that you will use in the new update. There are no new emoji with this upgrade, but there are still plenty of important changes from iOS 9.1 to iOS 9.2. 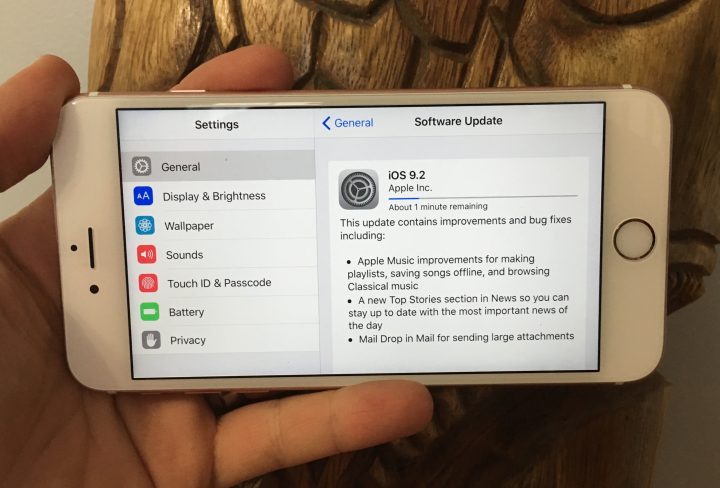 We see a number of fixes for problems with Apple iPhone apps and iPad apps, new accessory options for iPhones running this update and a lot of fixes for other iOS 9 problems that frustrated users for the last several months.

Apple fast tracked the iOS 9.2 update compared to earlier years, where big fix updates did not arrive until the year after a new version of iOS arrived.

The iOS 9.2 update is a free download and it runs on any device compatible with iOS 9. This is the same set of devices that can run iOS 8, so you can install this on a wide range of devices.

Right now it is possible to downgrade to iOS 9.1, but that will not last forever. You do not need to install the update on your iPhone or iPad, but there are many reasons to do so.

Use the images and descriptions below to learn what’s new in iOS 9.2 an how this compares to iOS 9.1. You can click on an image below to jump directly to that new iOS 9.2 feature or you can use the arrows to move through each of the images.