iOS 9 is the new software that powers the iPhone and iPad, and this year the new iOS update refines the user experience with subtle but powerful changes to the looks and important new features that supercharge what Siri can do and it also becomes better at understanding what you want to do next.

The new iOS 9 upgrade delivers a redesigned Notes app that looks and feels vastly more powerful, a brand new font and a new iPhone search option that isn’t jest better looking — it can search deep within your apps to find what you want.

On the iPad iOS 9 update we finally gain split-screen multitasking on the iPad Air 2 which allows users to do more and to combine with a keyboard for an iPad that is closer to replacing a laptop for some users. 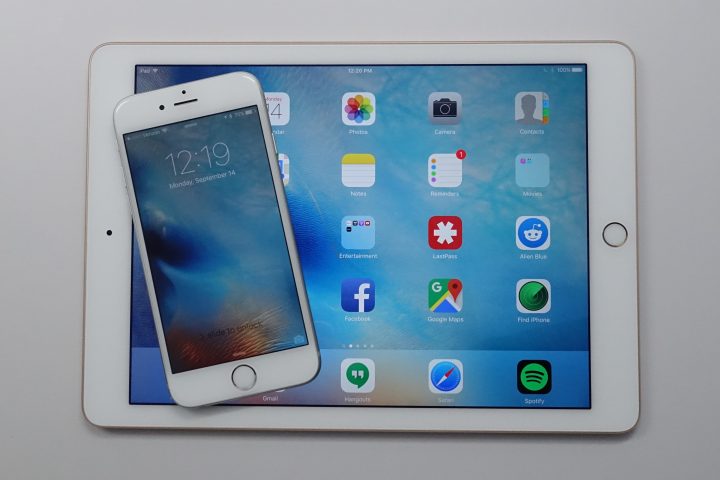 Read our iOS 9 review to understand what’s new in iOS 9 and how well the free iOS 9 update performs.

After using iOS 9 on the iPhone 6, iPhone 6 Plus and the iPad Air 2 this is our general iOS 9 review covering the new features and overall performance. We’ll breakdown individual performance of iOS 9 as well.

It is easy to assume that the iOS 9 update is small because there is no major visual change and at first glance there is no singular standout feature, but as a whole the free iOS 9 upgrade promises more than meets the eye.

The iOS 9 update is a free upgrade for iPhone and iPad owners. If your Apple device is capable of running iOS 8, it will run the iOS 9 update. In a change from earlier years Apple did not drop the oldest devices from the list of supported devices.

The iOS 9 update is available on September 16th for users to download through an over the air update or through iTunes.

Click or tap below for a quick jump to specific sections of the iOS 9 review.

The iPhone and iPad can predict what you want to know, which leads to faster answers and timely information. There are predictive features in iOS 9 and the new iOS 9 search is smarter.

After using the iPhone and iPad on iOS 9 for several days the device will start to show you apps, contacts and places nearby that may interest you. In theory this will also show you the news that is important based on your location. 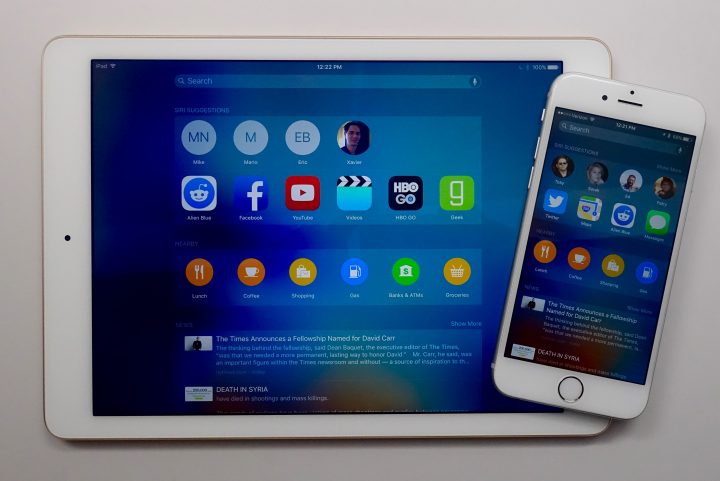 iOS 9 search is smarter thanks to Siri.

Siri powers this predictive search, but you don’t need to talk to your iPhone to enjoy these benefits.

The new Search screen sits to the left of the home screen. You can still pull down to search in iOS 9, but if you swipe to this new iOS 9 search screen you’ll see four new areas of information.

The contact and app suggestions are spot on, showing us the apps we most often want and the contacts we’ve most recently talked to by phone or text. Nearby search is helpful, with suggestions that vary based on time and location. In the morning users will see coffee, breakfast and other locations, while this will shift to dinner, bars and other categories late in the day or at night.

So far the disappointment is the In The News section that shows trending news, which is not always of interest. Hopefully this will start to change based on usage of the new Apple News app. 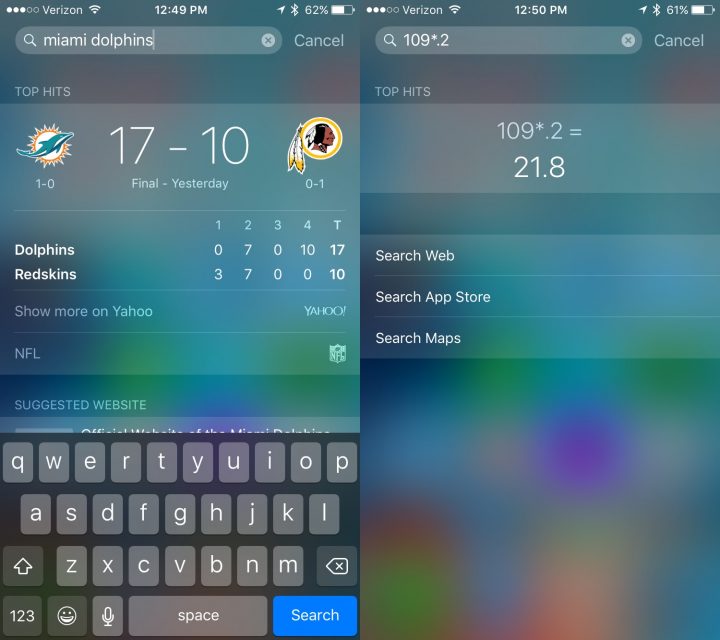 Some of the new iOS 9 search features in action.

Searches will now bring up cards that show you sports scores, the weather, stock prices, quick access to contacts and you can even use search as a calculator or converter. These results are similar to silently using Siri on older versions of iOS.

When you search in iOS 9 the system can now search within other apps that support this feature. Typing in search will allow you to search inside an app like Evernote or a recipe app to find what you want from the main iPhone Search screen.

Apple also adds a search option to Settings, so finding an obscure setting you want to change is easier.

Predicting Your Next Tap

After extended use the iPhone will start to understand what you may want to do in situations. For instance, when plugging in headphones or connecting to my car, the iPhone will show me a small audible icon in the lower left of the lock screen as it recognizes I most likely want to listen to an audiobook. You will not see the benefit of this immediately, but after a few days you will start to see how the iPhone knows what you want to do next.

If you use the default Mail app on the iPhone calendar events will automatically appear on your calendar, similar to a Gmail feature and Apple’s Mail app can also help you remember to include someone on an email based on the groupings you normally send messages to. If you get a phone call from an unknown number and that phone number is in your email, the iPhone will tell you who the call might be from.

The Mail app is still not useful enough for me to rely on so I use the Gmail app on my iPhone, but these features make a compelling case to test out the iOS 9 mail app.