The Samsung Galaxy Note 2, Samsung’s new 5.5-inch phablet, finally came out of hiding yesterday at IFA 2012 and revealed itself to the world. And while it sits alone on the phablet throne right now, we expect it to get some competition soon, and one device that will likely compete for the hears of minds of prospective Galaxy Note 2 buyers is the Verizon’s LG Optimus Vu, the LG Intuition.

The LG Intuition is likely going to be Verizon’s version of the LG Optimus Vu, a device that was first announced all the way back in February at the Mobile World Congress in Barcelona.

The Optimus Vu is, like the Galaxy Note and the Galaxy Note 2, a large screen smartphone that utilizes a pen stylus as an alternate input. And thus, it is likely going to be one of several devices to give the Galaxy Note 2 a run for its money here in the United States. The other device being an HTC 5-inch device that remains in the shadows.

That being said, we want to run down all of the rumored specifications and release date rumors in regards to the LG Intuition, a device that LG hopes will steal some of Samsung’s thunder. 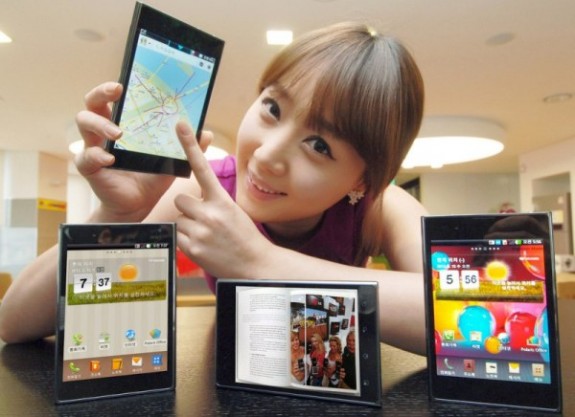 The LG Optimus Vu will likely hit Verizon as the LG Intuition.

The LG Intuition release date, much like the device itself, remains unannounced and unofficial. However, a press image that leaked out several days ago indicates that September might be the release month for the LG Intuition.

The most intriguing part about the image was the date that was listed on the device’s screen, September 15th. 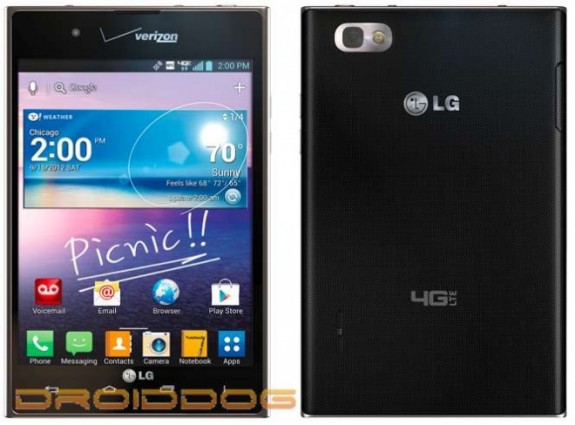 The LG Intuition could launch on September 15th.

Manufacturers will often hint at a release date on these press images and that’s why September 15th is currently the rumored date for the LG Intuition.

It’s very possible that the date will come and go without a release but LG said that its LG Optimus Vu will launch in the U.S. sometime this fall and September fits the mold perfectly.

The LG Intuition, assuming it looks and feels exactly like the LG Optimus Vu, is going to be a large smartphone. It has a massive display and thus, a larger footprint than most smartphones.

LG though has managed to keep the form factor extremely thin with the Optimus Vu checking in with a form factor that measures only 8.5mm thin. In comparison, the Galaxy Note 2 is 9.4mm thin.

Because of its size, the Optimus Vu weighs 168g, heavier than a normal smartphone. Of course, LG may have tweaked the Verizon version in some way but this is, at the moment, what we expect from the LG Intuition.

One of the biggest draws of the LG Intuition will be its 5-inch display. That’s just a bit over the 4.7-inch displays found on phones like the HTC One X and smaller than the 5.5-inch display found on the Galaxy Note 2.

As for the specifics, the LG Intuition display will likely have an 4:3 aspect ratio like an iPad or SDTV with a resolution of 1024×768, similar to the iPad 2 display.

A leaked ad also claims that the LG Intuition’s IPS display will feature vibrant colors so prospective buyers should expect that as well.

As for the rest of the LG Intuition, again assuming it’s the same as the LG Optimus Vu, it should rock a 1.5GHz dual-core Snapdragon S4 processor, the same processor in the U.S. versions of the HTC One X and Samsung Galaxy S III, 1GB of RAM, a rear-facing 8MP camera, and 32GB of internal storage space.

There will also be a stylus to pair with the LG Intuition’s display which calls the Rubber Diem. With the LG Optimus Vu, the stylus is sold separately. It’s unclear whether Verizon will do the same. 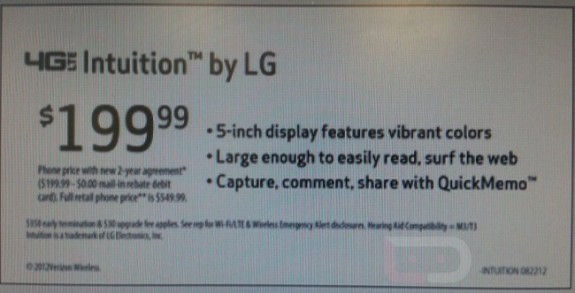 Also on board the Optimus Vu is Android 2.3 Gingerbread though we suspect Verizon will outfit the LG Intuition with at least Android 4.0 Ice Cream Sandwich and the device will run on Verizon’s 4G LTE network.

This means that the device will be able to pull down data speeds that can reach up to 10 times faster than those found on normal 3G.

Apparently, Verizon will be seeking $199.99 on-contract for the 5-inch phablet and will be looking to charge $549 for the device without a new contract.