While Sony Ericsson is slated to use February’s Mobile World Congress held in Europe to announce some of the company’s XPERIA handsets, a mystery high-end touchscreen phone or smartphone has recently graced some banners that are being hung at the Consumer Electronics Show in Las Vegas, NV this week. 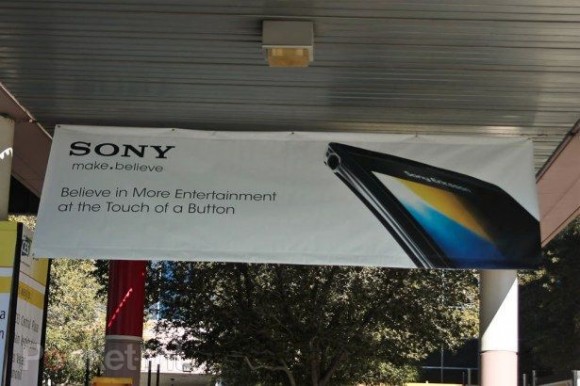 According to the photos captured by Pocket-lint, the banner shows off a touchscreen and a 3.5 mm headphone jack on the upper left hand side. Sony, and perhaps Sony Ericsson–a joint venture between Sony and Ericsson–will most likely position this handset as an entertainment device. The banner itself reads: “Believe in More Entertainment at the Touch of a Button.”

As the touchscreen display is highlighted, some in the industry believe that this device could potentially be the XPERIA X12 Android smartphone, which is rumored to launch with Android 2.2 Froyo, a 4.3-inch touchscreen display, and a 12-megapixel camera sensor that’s capable of 1080p HD video recording. That device has been rumored to be the codenamed Anzu phone.

With a 4.3-inch display, this Android phone will match the screen size of the HTC EVO 4G on Sprint, the Motorola Droid X on Verizon Wireless, and the HTC HD2 and HD7 on T-Mobile; the latter two devices run on Windows Phone 7.

Additionally, it’s rumored 12-megapixel image sensor will match the best-in-class Nokia N8, which itself has a 12-megapixel camera with a mechanical shutter, Carl Zeiss lens, and Xenon flash. However, the ability to record videos in up to 1080p HD resolution will best Nokia’s N8 720p HD video encoding capabilities.