In the past, with unibody metal constructions, various HTC-made handsets suffered from an issue known as the death grip where gripping the phone would result in diminished reception and signal strength. On the new 2012 flagship HTC One X, it doesn’t appear that reception is an issue, but the device does suffer from a new type of death grip where if pressed or gripped tightly, the screen would either become temporarily discolored or unintentional selections may be made without user intervention. 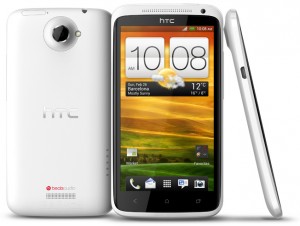 The first issue is pretty typical and is created when a user taps and presses on the screen too hard where the top glass surface would flex and come into contact with the underlying LCD panel. This issue is notable on desktop displays, LCD or LED television panels, and even other touchscreen devices like other smartphones and tablets. Most often, users won’t be pressing down that hard on their screens and the issue is a non-issue in typical, normal day-to-day operations.

However, the problem is not confined to just pressing and tapping on the curved display of the HTC One X, and according to CNET‘s UK office, the issue can occur when a user presses around the screen’s edge or even grips tightly around the edges of the device. Sometimes, the publication reports, not only will there be discoloration with the underlying LCD panel underneath the glass, but that things may get activated on the touchscreen inadvertently just by gripping tightly around the device.

HTC says that it is not aware of any of the problems that CNET described and the company speculates that CNET may have been given non-final hardware builds. The publication says that the four phones that they had tested did not come in final HTC retail packaging, and three of the units came from HTC while one came from UK network Three.

As the design of the HTC One X is fundamentally different than the variant coming to Sprint in the form of the HTC EVO 4G LTE, it’s unclear if the same flaws will affect Sprint’s device.