With each new Android release, more emojis get added to our smartphones and tablets. With the release of Android Q users will be able to enjoy over 60+ exciting new characters to express themselves.

To celebrate World Emoji Day on July 17th, Google confirmed that at least 65 new emoji are now available in Android Q, and will roll out to users later this year. Or, if you’re testing things out with the Android Q beta, they’re live right now.

As you can see, Google is adding some awesome new emoji to Android that users have been requesting for quite some time. Like the cute little Sloth for your friend that is always late or moving slow, a band-aid, pets, an axe, or even people of all skin-tones kneeling. And we can’t forget about waffles, because now we have waffles.

In fact, earlier this year the Unicode Consortium released a list of over 200 emoji candidates for 2019. The list included red-haired emojis several different emoji of people and couples of all different skin-tones, a waffle, service animals, people in wheelchairs, and the much-anticipated white heart emoji. 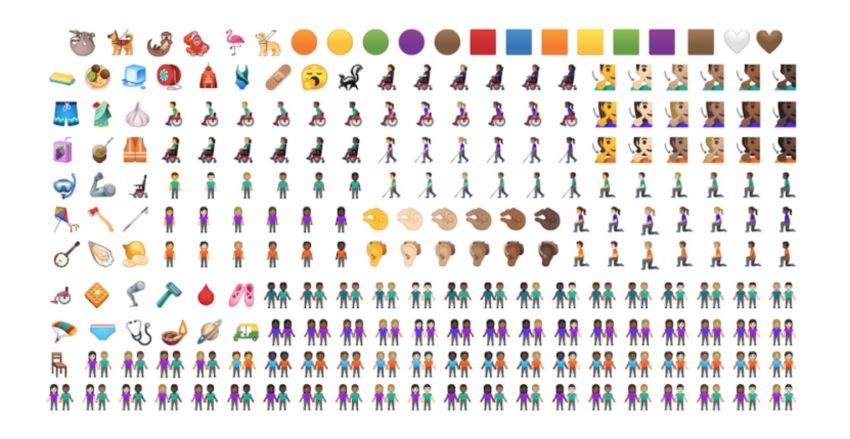 Google specifically mentioned 65 new emoji during its announcement, but this release actually adds a lot more than that to Android as a whole. They had this to say:

“Android Q will also bring 71 multi-skintoned couples to devices, and support 53 gender-inclusive designs of emojis that Unicode has not specified gender.”

The example states that the police emoji is usually a male while the “haircut” emoji is usually a woman, which can reinforce gender stereotypes. With this update, emoji with no gender specified will default to a gender-ambiguous design on Android, or users will have the option to choose the gender — and in most cases — the skin tone. Basically, you’ll have more options than ever before.

Google is currently testing the Android Q update and is on the 5th beta release. If you’re using the beta you’ll see these new emoji today. For everyone else, they’ll debut inside the release of Android 10 Q later this year, likely sometime in mid-August. You can learn more about Android Q if you want, or click here to try the beta today.

Do you like the new Android emoji coming in Android Q?