The Galaxy Note Edge is a limited edition concept phone and one that should be intriguing to those that are looking to upgrade to a high-end smartphone. Samsung’s Galaxy Note Edge specs include a Quad HD resolution, a 2.7 GHz Quad-core Snapdragon 805 with 3GB of RAM, Android 4.4.4 KitKat with Samsung TouchWiz, 16MP camera with Optical Image Stabilization, massive battery, and a thin 8.3mm frame. It also comes with an S Pen stylus and a unique curved display.

In October, Samsung released the Galaxy Note Edge in Korea and Japan ahead of several others including releases in the UK, China, Russia, India, Australia, and the United States. Earlier this month, the U.S. Samsung Galaxy Note Edge release date was finally confirmed for several U.S. carriers and tomorrow represents the device’s first release in the U.S.

Tomorrow, the AT&T Galaxy Note Edge goes on sale for the first time. The carrier says that the device will be available in a limited number of stores, it didn’t say how many of course, and it’s not clear when the release will expand to all of its retail locations.

It’s not often that we see a carrier announce a “limited” release of an Android smartphone. Most flagships are mass produced and easy to find. The Galaxy Note Edge is an Android smartphone but it’s not a mass produced device. It’s a limited concept phone that isn’t meant for the main stream. It’s for those that have deep pockets that want to get their hands on the latest technology. 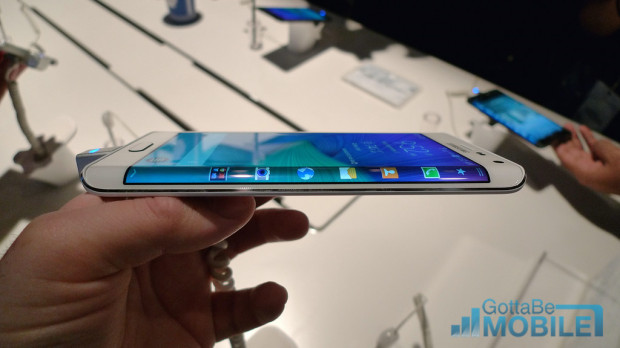 With all of that in mind, our guess is that tomorrow’s release is going to be very, very limited. We can’t say how many stores will have it in stock but we’re willing to be that it’s going to be just a few. We would not be surprised if AT&T got the device out to its high traffic stores first before shifting to its lesser stores in the weeks ahead.

If you are planning to buy this phone tomorrow, you absolutely need to call ahead to confirm the device’s presence. Our guess is that more than a few people will get the Galaxy Note 4 and Galaxy Note Edge confused so you’ll want to make sure that the person you’re talking to knows what you’re talking about.

Again, this is a limited concept device and not a mass produced device like the Samsung Galaxy Note 4. We already expected its stock to be far more limited than the Galaxy Note 4 though with the Galaxy Note 4 experiencing some stock issues of its own, we would not be surprised if the Galaxy Note Edge was extremely hard to find on all U.S. carriers at the start.

Samsung’s had a hard time keeping retailers stocked with Galaxy Note 4 variants, particularly the white models. Amazon and Best Buy have seen their stock fluctuate for several weeks now and both are currently sold out of particular models. We also saw Samsung have some trouble getting the Galaxy Note 4 out in other countries including the UK and Australia.

We wouldn’t be shocked if the device sold out several times at carriers, or retailers, in the weeks ahead as Samsung and its supply chain work to keep up with demand.

U.S. Cellular will apparently release the Galaxy Note Edge. This came as a bit of a surprise given that it wasn’t included in the initial announcement but its arrival is certainly a good thing. It gives consumers even more choice.

The carrier did not confirm any details about the Galaxy Note Edge release or release date leaving prospective customers in the dark. We don’t have any inside information to share though we do know how U.S. Cellular tends to operate.

We expect U.S. Cellular to get the device out around November 29th, Black Friday. This is the start of the holiday shopping rush and an important date from a marketing standpoint. There will be a ton of eyes out at malls and stores on that date and carriers will want to get their goods, especially expensive phones like the Galaxy Note Edge, out to meet those eyes. At the very worst, we could early December but that would put the device in a tough spot.

It’s worth noting that we haven’t seen this device pass through the FCC yet which means that its release date probably isn’t right around the corner. We’re thinking mid-to-late November at the earliest.

We’ve seen the Verizon Galaxy Note Edge pass its GCF certification, a necessary certification prior to release, but we have not see it clear the FCC. It cannot be released until it gains clearance and that’s probably why we haven’t heard anything about a concrete release date. Verizon must wait until it gains approval from the appropriate bodies.

That said, we can’t see this release date stretching deep into the fall. We wouldn’t be surprised if Verizon was able to get this phone out in mid-to-late November, around Black Friday, assuming everything goes well in testing. Verizon’s usually late to big smartphone releases but the carrier, like most carriers, likes making money. A release in and around November 29th presents the most lucrative time frame for a release.

Sprint still hasn’t confirmed an on-contract Galaxy Note Edge price ahead of its release on November 14th. Our best guess is $399.99 for the 32GB version of the phone. This is what AT&T’s charging for the Galaxy Note Edge on-contract and Sprint usually falls in line. It originally charged $350 for the Galaxy Note 4 before falling in line with the standard $299.99 price tag. We can’t see it overcharging here, not when the device is already this expensive.

Sprint’s CEO says the carrier might drop subsides in 2015 but we don’t expect it to accelerate its plans. Look for the Sprint Galaxy Note Edge to be available on-contract when it arrives later this month.

We expect to see the same from the U.S. Cellular Galaxy Note Edge price. Its on-contract pricing almost always follows its competitors and we’d be shocked if it went anywhere over $399.99 on-contract.

Given its status as a concept smartphone and given that we haven’t see many Galaxy Note 4 deals emerge, we’re not expecting widespread Galaxy Note Edge discounts. With it being a limited device, there’s simply no incentive to drop the price tag down. We could see a few Black Friday offers knock the price down or a trade-in shed some weight off the price but we’re expecting straight up discounts to be few and far between in 2014 and beyond.

At this point, we expect Australia and China to be next in line to the Galaxy Note Edge.

Weeks ago, Samsung Australia said that the Galaxy Note Edge release in Australia had been pushed to November 12th for unspecified reasons. The device was originally scheduled to arrive on November 5th. We haven’t seen any new developments here so it looks like Australia’s release will land around the same time as the U.S.

China is a major market for Samsung and it’s one that’s been expected to join the U.S., Korea and Japan at the front. With the U.S. release date now here, we’re thinking that Samsung will now set its sights on the Chinese market with a release. Approval in China can be tricky, just ask Apple, but we expect it to be a focus going forward.

We also expect Russia and India to get the device before the end of the year with Canada bringing up in the rear in 2015.

Speaking of that release, we’d be shocked if the Samsung Galaxy Note Edge release in Canada missed the first quarter (January-March). A release in April would potentially clash with a Samsung Galaxy S6 release and in our mind, a release that far out would hinder the device’s success. We’re willing to bet that the Canadian Galaxy Note Edge release and perhaps others will arrive early in the year to avoid conflict.

This needs to be said again. Do not expect new Galaxy Note Edge colors. It’s a limited concept device and we expect Samsung to stick to black and white so as not to foul up production.