Alongside the Galaxy Note 9, Samsung announced an all-new Galaxy Watch with a lot to offer. This new smartwatch comes in two sizes, an LTE option, and promises to last nearly a week on a single charge. Here’s what you need to know about Samsung’s new Galaxy Watch.

While the Galaxy Watch doesn’t run Google’s Wear OS, like we heard from rumors, it’s still an excellent smartwatch in a market dominated by the Apple Watch. If you’re looking for a watch that isn’t made by Apple, this is worth considering.

Read: 10 Things You Didn’t Know Your Smartwatch Could Do

If you’ve been waiting for a new smartwatch to pair with your Android phone, like a Galaxy S9 or the new Galaxy Note 9, this is it. Here’s how long the battery lasts, the release date, and how much you’ll pay for the Samsung Galaxy Watch. 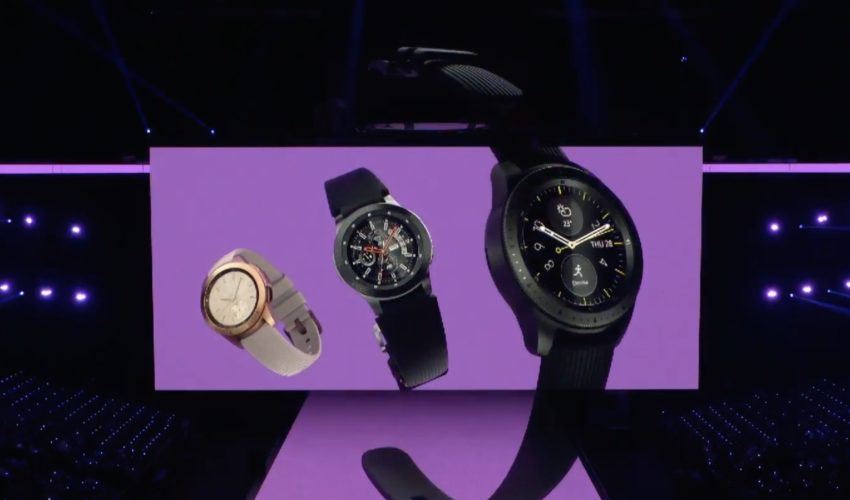 First things first, the Galaxy Watch will be available for pre-order starting August 10th with the release date set for August 24th. Basically, you can walk into carrier stores, retailers, or head to Samsung.com on August 24th and buy a Galaxy Note 9 and the Galaxy Watch at the same time. They even have a new dual wireless charging stand to recharge both devices at the same time.

We don’t see a reason to pre-order the Galaxy Watch, so go buy one on August 24th at a store near you.

Samsung’s new smartwatch comes in two different sizes, that way it’s perfect for both men and women. Or, for those that don’t like a massive watch on their wrist. The smaller device is 42mm (1.2-inch screen) and has a 20mm changeable band. 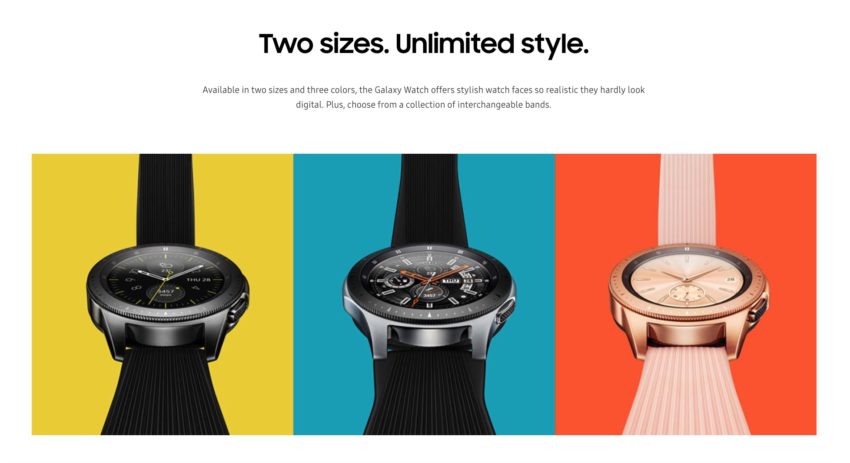 However, the one most people will want is the bigger 46mm Galaxy Watch. That’s because it has an even bigger 1.3-inch OLED display, and a far bigger battery that Samsung claims can last for days on end. The bigger Galaxy Watch also has a wider 22mm band that matches most 3rd party accessories sold for other watches around the globe. Not to mention the wide array of replacement bands from Samsung themselves.

While specs inside a watch aren’t as important as your smartphone, it does make a big difference. Especially when it comes to battery life, or for features like an always-on display. What’s the point of a smartwatch if the screen is always off to preserve battery life? Samsung is using the latest and greatest wearable technology to ensure a great experience and top-tier specs.

As you can see,  Samsung’s new watch packs quite a bunch. That said, it doesn’t run the latest wearable processors from Qualcomm, and the smaller model doesn’t have a very big battery considering the screen is only .1 smaller.

You still get a water-resistant device that meets military-grade ratings for toughness. And yes, they have Corning Gorilla Glass covering the display. We would love to see a bigger battery, Google’s Wear OS, and the same 1.5GB of RAM on both models, but they’re still shaping up as great watches for potential buyers. 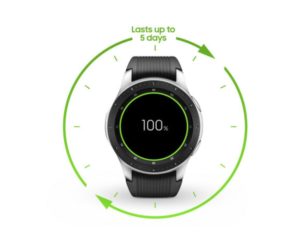 The most important aspect of a smartwatch for me is battery life. I don’t want to take off and recharge it daily like I do my smartphone. And what good is a watch that dies halfway through the day? Luckily for you, Samsung claims the Galaxy Watch will finally deliver the battery life everyone wants.

According to Samsung reps, when you combine the bigger battery with its new Wearable OS silicon processor, average users could get 5-7 days on a single charge. That’s impressive. The bigger 46mm watch has a 472 mAh battery. As a comparison, the Gear S3 last year had a 380 mAh battery, so the 46mm watch coming in nearly 100 mAh bigger is a pretty big deal.

Furthermore, Samsung really hounded on the battery life point. Stating that even the most demanding user can expect 3-days on a single charge. If true, that makes this potentially one of the best watches around. Now if only it wasn’t so thick.

As we said above, the Galaxy Watch comes in two different sizes. The 42mm watch is $329.99 which is pretty expensive, and available on August 24th.

Samsung’s bigger 46mm watch is only $20 more and will cost $349. That extra $20 gets you substantially better battery life, a slightly bigger screen, and a different color. You’ll be able to buy the Bluetooth-only model from Amazon, Best Buy, and Samsung’s store.

Additionally, an LTE variant will arrive later this year from carriers like AT&T, T-Mobile, Verizon and more. We’re assuming that one will cost even more, get bundled with the Galaxy Note 9, or come with heavy discounts when you add a line. Get yours on August 24th.