If you own an Apple TV, you need to own SketchParty TV. It’s one of the funnest games you can play on your Apple TV, and it is one of a few games that you can play with your entire family or group of friends all at once.

When we first wrote about SketchParty TV it was an iPad app that used AirPlay to put a draw and guess game like Pictionary on your TV using the Apple TV.

Now you can use the Apple TV SketchParty TV app to play directly on your Apple TV using an iPhone or iPad to draw the clue that you need your team to guess. The game is fun, fast paced and it works wonderfully.

With SketchParty TV you can play Pictionary or Win, Lose or Draw on your TV, which is a great way to bring back an old favorite with a high-tech canvas. 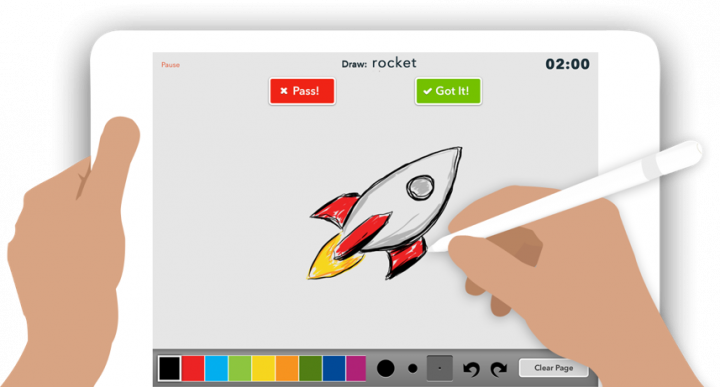 Check out SketchParty TV, a fun Apple TV app that is a high-tech Pictionary or Win, Lose or Draw style game.

It’s still one of the best Apple TV party games that you can buy and it’s easy enough for all ages to play and enjoy.  SketchParty TV is $5.99 in the App Store and it will eventually go up to $9.99, which is still cheaper than buying a board game.

Now, several years and many upgrades later, SketchParty TV 4.0 is here for the new Apple TV 4 or for your iPhone and iPad to AirPlay to an older Apple TV.

The new version of the game also supports the Apple Pencil on the iPad Pro 9.7 and iPad Pro 12.9. This means you can draw with more precision than a finger or a third-party stylus. You don’t need to use a stylus or the Apple Pencil, to play the game, it’s just a nice addition.

Check out the video above to see what the SketchParty Tv 4.0 Apple TV app looks like so you can decide for yourself.

The app comes with a lengthy word list that allow you to jump in and start playing. You’ll find regular words as well as emoji options that you can draw. 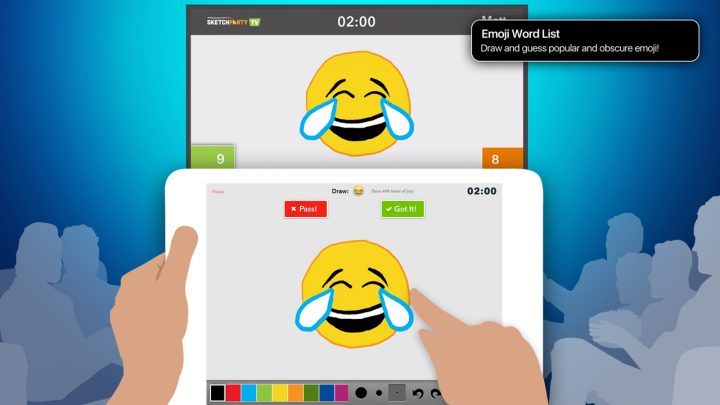 Draw emoji, from the built-in word list or make your own.

If you want to customize the game for your friends, family or a special event you can add your own words. This makes it an awesome option to use at an event for your group or business.

To play you need an Apple TV 4 if you want to run the app on your Apple TV, or you can play with the Apple TV 2 or Apple TV 3 using AirPlay mirroring.

You’ll need an iPhone, iPad or iPod touch that works with AirPlay. That’s the iPad 2 and up, iPhone 4s and up and iPod touch 5th gen and up.

The game is well worth the price and it’s one of the best Apple TV apps you can buy.