Streaming TV is an easy and cheap way to replace your cable subscription, and this review will explain why Sling TV is one of your best options. It’s only $30 a month, you’ll get over 30 channels you’ll actually want to watch, DVR recording and there are no contracts. Plus, you can quickly add extra content, channels or sports with ease.

So what is Sling TV? It is an over-the-internet TV service from DISH (stream TV like you stream Netflix) that offers the most popular TV channels for one easy to understand price. Basically, you’ll get live TV anywhere, when you want, with no contracts, equipment or hidden fees.

Read: Sling TV: 7 Things to Know Before You Sign Up

Sling TV lets you watch the best channels on live TV including ESPN or NFL Network, along with on-demand movies or DVR recordings on multiple different devices. Some of these include your Xbox, Apple TV, Amazon Fire TV, SHIELD TV, Roku, Mac, PC, as well as both Android and iOS without a regular cable subscription.

It’s TV for the 21st-century without the useless 800 channels cable companies push on everyone. And yes, they allow you to stream to multiple devices at a time. Here are the pros, cons, and if it’s worth the new $30 a month price. 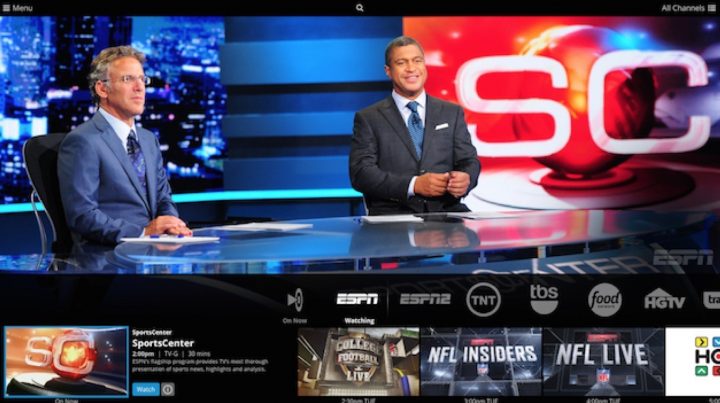 I used to have Cox Cable and bundled my cable, internet, and phone into a premium package all for $200+ a month. It was nice, but I also had over 1,500 channels I never watched. I was paying for stuff I didn’t need, and my cable bill was one of my biggest expenses each month. That’s why I ditched cable, and that’s also where Sling TV comes in. It’s essentially a trimmed down TV experience that only offers channels most people want or need, without everything else getting in the way.

Sling offers all the basics in one easy solution for multiple devices. Trim down your cable bill, get rid of all the equipment under the TV or on your roof, and get TV anywhere you want. It launched in 2015, but now several years later it’s the best option on the market. Especially when you compare it to AT&T TV Now, PlayStation Vue, or YouTube TV.

Our Sling TV video review below will give you a quick glance at nearly everything Sling TV has to offer for $30 a month. The video doesn’t have the latest Sling interface, but still gives you a good idea of what to expect. Here in 2019, it’s the same only you get more features, a better interface, and a lot more channels for the same starting price.

In December 2019, Sling increased the price from $25 a month to $30 a month, However, they now offer more channels, free DVR, and tons of features they didn’t have a few years ago. It’s still one of the best streaming services for the price, and cheaper than most of the competition.

In short, Sling TV is for people who don’t want to sign contracts and be locked into paying huge monthly bills for hundreds of channels they’ll never watch. The base package for $30 a month gets you 33+ channels of the best TV. Then, you can pay a few dollars more for a bigger package, multiple-device streaming, or for extra DVR storage. We’ll explain all those packages below.

Bottom Line: The bottom line though, is Sling TV delivers more than enough to make it absolutely worth $30 a month. It’s a blend between Netflix and cable, has plenty of content for the price, works on tons of devices, and if you don’t like it, just cancel. There are no contracts, so there’s no risk.

Keep in mind that you need to look at Sling TV for what it’s worth. It won’t have everything or the most options in the world, but they’ve combined the best of everything into a few well-rounded packages. Packages that are affordable. You’ll get the news, TV shows, movies, sports, kid channels and more for one low price. It’s the essentials but in a good way.  That, and it isn’t Comcast!

Start with these packages, then pick your extras.

As you can see above, the base package is pretty clean, and you’ll get AMC for all that The Walking Dead. They’ve bundled 30+ popular channels for one low price. Add on HBO and a few sports packages and you’re still spending around $45 a month for everything you need.

Being able to enjoy two ESPN channels, AMC (Better Call Saul), TNT, TBS, CNN, Comedy Central, History Channel, Food Network, Adult Swim, ABC Family and a few more all without a cable subscription is awesome. My favorite aspect is being able to watch ESPN anywhere, even on my mobile devices. Plus, they’ve added Fox channels and Fox News to more options, too.

However, if that core package isn’t enough for you, or you’d like more channels, you can add-on plenty. HBO is $15 a month, Sports packs are $5 with a decent selection for college football galore. They have a ton of options for Spanish users too. Not to mention Disney, a Hollywood pack, EPIX, Showtime, world news or lifestyle channels. In all, Sling has nearly 400 channels total in 22 different languages, 65,000 on-demand titles, and support for 15 platforms.

No, you’re not getting a ton of channels here, but that’s the point. You don’t have to scroll through 800 channels to find what you want. It’s the basic but important stuff everyone truly wants, and that’s all. Here’s more info about some of the add-on options.

Of course, Sling TV has a pretty good movie selection too. However, they’re pretty expensive and you’re better off finding something in the expansive and ever-growing On-Demand selection. Where you can restart a movie or show from the past on most networks. You can start movies on demand from HBO, Showtime, Epix, Comedy Central, FX, or anything else, as long as you have that channel or add-on. And some, even if it’s airing right now, you can hit the “restart” button to start the movie over.

As we stated in our video review above a lot of the add-on packages have pause and fast forward, but some don’t. As a result, sometimes I find myself trying to pause a channel only to see a notification that it’s not available. All while other channels give me that option. It’s just a little inconsistent, but for $30 a month, it’s worth the tradeoff.

In the beginning, Sling TV didn’t have recording or DVR, and you couldn’t watch TV on more than one device. Neither is an issue anymore. In fact, now you get 10 hours of DVR for free, and you can get more for just $5 a month. It’s stored in the cloud since you don’t have a cable box. 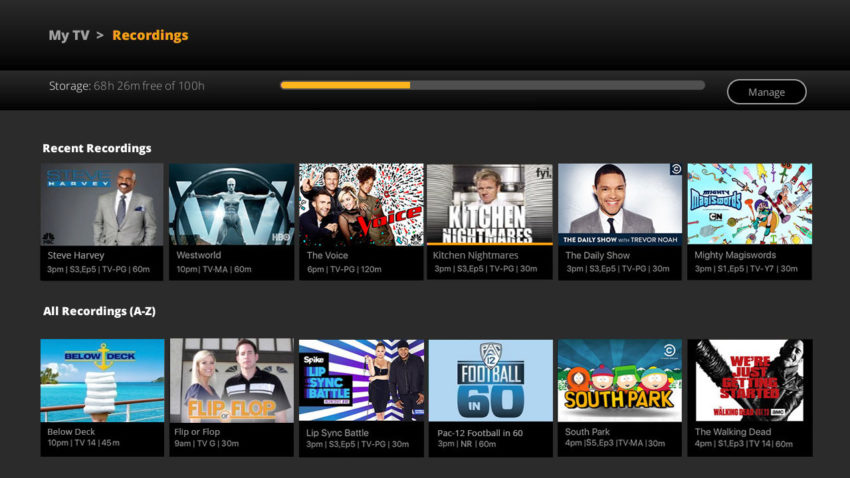 Basically, you can record from 10 to 100 hours of content and watch it on nearly any device you own. Everything is stored in the cloud, so you can access it anywhere and everywhere.

Next, we want to briefly mention something that’s really important, multi-user streaming. I want to watch ESPN in the living room, while my kids stream Disney channel upstairs. This is where Sling Orange and Sling Blue come in.

Sling Orange is a single stream, and only one device can view it at a time. So you can switch from upstairs to downstairs or a smartphone, but only ONE stream can be going at a time. The Orange plan has more channels.

Sling Blue is still only $30 a month with a similar channel lineup, but you get multi-user and multi-stream support. With Sling Blue three users can watch three different Sling TV streams at a time. Perfect for most families.

I’ve used Sling TV for over three years now, and it completely replaced the cable. I no longer have a $200 bill, and I still have everything that’s important to me. Pair that with Netflix, and I’m all set. I’ll continue to pay my $45 a month for a few add-ons and HBO. The overall interface is slick and lag-free, there’s no loading or buffering, and it’s a great overall experience.

Sling TV redesigned the interface to give users a more “cable-like” experience. Meaning if you want to channel surf, you can, with the grid layout of channels. Or, you can switch to “channel” mode which has a clean layout with big previews of each show or movie. You can see those in our image below. 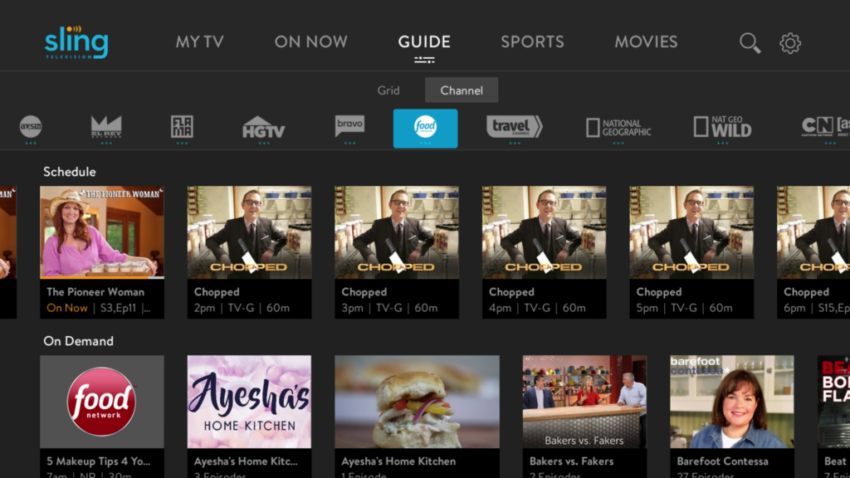 Navigation is simple, easy, and straightforward across all platforms. You have a customized and curated “My TV” you get to make yourself at the top. Along with everything that’s on TV right now, rather than a list of channels. Then a regular TV guide, sports, and a movies column. This breaks it down to your favorites or other popular categories.

Tap near the middle top where it says Channel, and select Grid, to get a traditional TV guide layout. 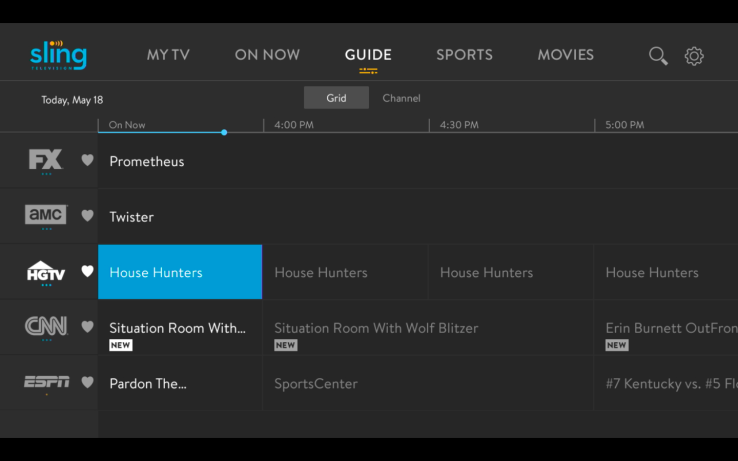 In the early days, Sling TV was a little confusing, and somewhat frustrating. However, in 2018 they cleaned it up, and now the interface is extremely clean, simple, and easy to understand. You’ll have guides that are easy to scroll through or large previews with a YouTube-style layout that everyone is familiar with.

Basically, it’s not complicated and just works. It’s TV for the modern user. You can even browse ahead in the day to see what’s on, and even pause some channels, all while your current show (even another channel) is playing in the background. I can keep watching ESPN while I search for a movie to rent for the night, and more, all with ease. I also enjoy being able to watch movies from earlier in the day on EPIX, on demand.

If you’d like to try Sling TV right now, they’re offering a free 7-day trial. Then, a lot of HDTVs from Samsung and LG have the Sling TV app built-in and come with a free 3-month trial. Plus they’re running a promo where you can sign up for only $20 a month, instead of $30.

Final Thoughts (Is Sling TV Worth It?)

In closing, Sling TV is absolutely worth the $30 a month to see if it’s right for you. After all, there are no contracts, so there’s no risk. However, we recommend everyone start with the multi-user streaming plan, then add on a few packages easily from the website or app. Later you can add a few more, watch PPV fights or events, and add HBO and still pay less than $50. 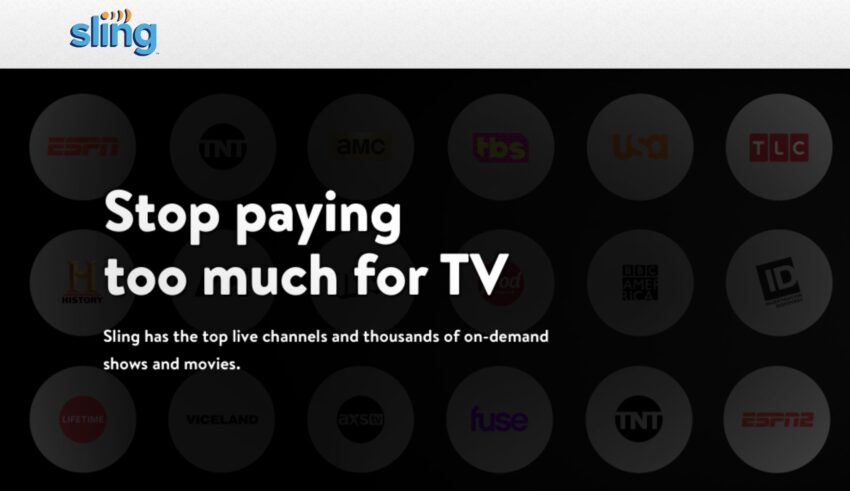 Another big aspect of Sling TV is sports. The company has a deal with the NFL, NFL Network, RedZone, Fox Sports, FS1, ESPN channels, PAC-12, ACC and more. If you’re a fan of sports but don’t want to take the traditional cable route, Sling TV could be your new best friend.

Sling TV has a system that works, plenty of options, and it’s available on almost any device. That includes right inside the Chrome Browser. Basically, you can watch live TV wherever, whenever, with ease. Not to mention it has lots of room to grow and improve. They took a big step toward loosening the grip cable providers have over everyone and aren’t slowing down anytime soon.

If you’re like me and noticed you watch Amazon Video or Netflix 90% of the time, and don’t use most of the 2,000 channels your cable company provides, you’d be crazy not to try Sling TV.