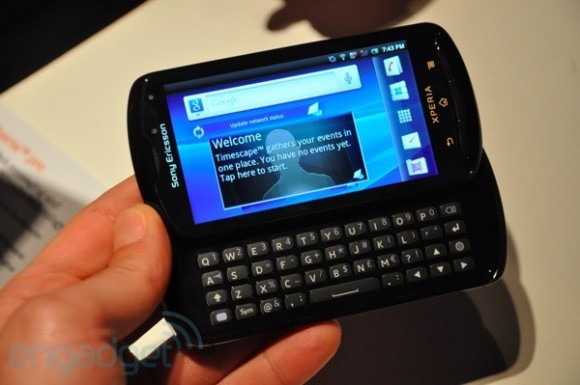 In addition to the Sony Ericsson XPERIA Play and XPERIA Neo launches at Mobile World Congress, the Android smartphone-maker also launched the XPERIA Pro, which is more geared for business. Rather than the PlayStation Certified gamepad on the XPERIA Play PlayStation Phone, the XPERIA Pro utilizes the same form factor but includes a sliding keyboard in landscape orientation complete with island-style keys.

Like the Neo and the Play, the XPERIA Pro features Google’s Android 2.3 Gingerbread operating system, which debuted in December of last year, and will come with Adobe Flash 10.1 support. It also features a nice user interface overlay from Sony Ericsson that has been seen on past Android smartphones, including the XPERIA Arc, which had debuted at CES.

Engadget had some time with the device and it looks like Sony Ericsson is porting the thinness lessons learned from the XPERIA Arc. According to the consumer electronics blog, the device is still relatively thin, especially considering that it does have a sliding keyboard.