Have you been looking at picking up Verizon’s “PlayStation Phone” aka the Sony Ericsson Xperia Play? If so, you might want to hold off for the time being because it appears that the carrier might have an Xperia Play with 4G LTE in the pipeline. According to this here internal document, training for a 4G version of the Xperia Play is set to begin today and Android Central says that said training is for Verizon.

Anything and everything beyond its existence is murky.

It doesn’t have a rumored release date, pricing, or specifications. Nada. However, if training is indeed going down starting today, we expect some details to leak out sooner rather than later. 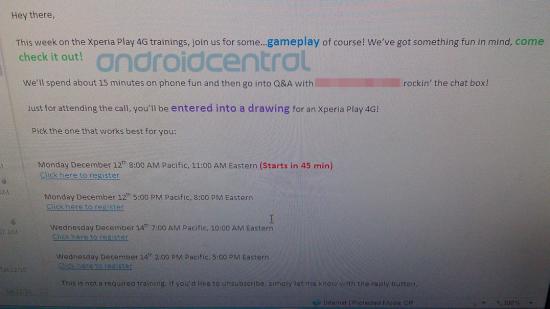 After reviewing the Xperia Play, we found the lack of 4G LTE to be one of the device’s biggest cons. We’re also hoping that Sony and Verizon include an upgraded camera and some more storage space as well.

We’ll just have to wait and see if carrier and manufacturer adhere to all of our requests.