In this guide we explain how to watch or stream UFC 247 where the defending champ Jon Jones will take on Dominick Reyes for the title. This is the first big UFC title fight of 2020 and it takes place on February 8th at the Toyota Center, in Houston Texas.

You don’t need cable, or to go to a bar to watch the Jones vs Reyes fight this weekend, although that’s a good idea too. Instead, you’ll just need a good internet connection and ESPN+. If you really want, you can even watch it on your iPhone or Android, but we recommend watching it on the big screen. 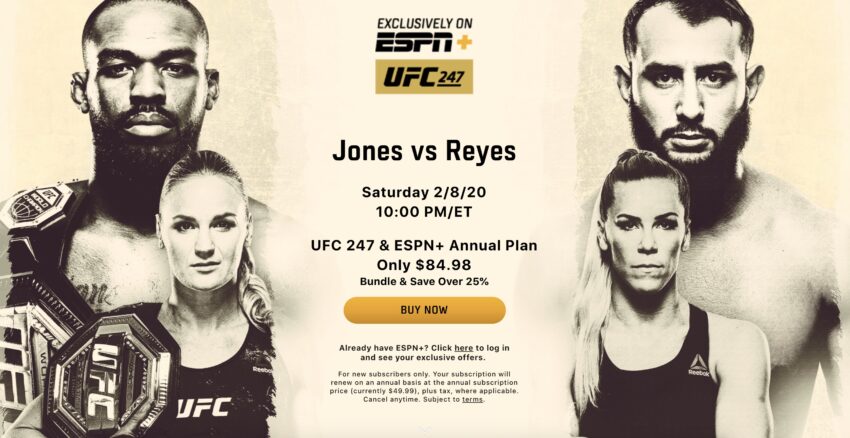 Despite what you think of him, or his troubles, Bones Jones is a force in the octagon and someone you don’t want to mess with. If there’s anyone that can beat him, it’s Dominick Reyes.

You probably don’t have tickets to see the fight in person, which means you’ll be tuning in at home on the big screen TV, or at a Fight Night party with friends. You can watch the game on TV, or stream it to almost any device imaginable. Unlike the Connor fight, Jones vs Reyes is being shown on both regular ESPN and ESPN+ depending on where you live, and on PPV.

If you have cable, just go to ESPN or fire up ESPN+ around 5:30 to watch the ladies battle with Shevchenko vs Chookagian, or at 7:00 PM PT for the main card.

How to Watch or Stream UFC 247 Online

The contest will be Jones’s first time back in the Octagon since he narrowly beat Thiago Santos back in July, so this is a big fight.

Along with being a traditional UFC PPV event, you can also watch everything unfold on ESPN or ESPN+ with our links below. However, in some cases, you’ll have to be a subscriber to ESPN+ AND buy the ESPN+ PPV (pay-per-view) event.

Basically, you have to pay at least $4.99 for access to ESPN+ and then pay for the UFC PPV fight itself, which recently went up in price. It certainly isn’t cheap so you might want to grab a few friends and have them pitch-in. We recommend signing up for the ESPN+ and UFC PPV bundle for just $85, which is a pretty steep discount and gets you access to ESPN+ for an entire year.

And while most people are adding ESPN+ for this fight, having a subscription actually gives you a lot of other content. You get access to over 20 exclusive live UFC Fight Nights all year long, original content including Dana White’s Contender Series, UFC Destined, classic fights, plus tons of other sports content in general.

The new ESPN+ service works on almost all major products, services, and platforms. Subscribers can watch ESPN+ in the “ESPN+ tab” of the latest version of the ESPN App, on the web. Here’s a list of the popular options.

There is a good chance you may run into Jones vs Reyes streaming problems with the ESPN+ app, free trials, or the device you’re using. We recommend signing up for ESPN+ and getting everything ready ahead of time, that way you know everything is all good before Bones Jones starts getting crazy.

As we said earlier, this is a pretty big fight and a lot of people will be tuning in. The stream stayed up for the Connor fight a few weeks ago, so we’re not expecting any problems. That said, it’s always good to be prepared.

You should tune in well ahead of the match and make sure you can stream the fight. You need to be on tvOS 10 or higher or iOS 9 or higher on Apple devices to watch. Most newer smart TVs, Roku, or Android TV sets work just fine with ESPN+ too. Be warned that there are often complaints about the PSN Live Events viewer crashing during UFC events, so you may want to be cautious if you go that route and make sure your PS4 is up to date.

We recommend restarting any and all TVs, boxes, consoles or phones and computers before starting the event. Then, if possible, plug in your device for a wired connection or make sure you have a strong internet connection for the best results. Make sure no one else is trying to stream movies, shows or download large files during the event.

If you deal with ESPN+ app problems during the UFC 247 fight try to wait them out, as we could see loading circles and “buffering” where the screen freezes temporarily. If things really go south, quickly restart the app or your TV and try to get back up and running. Good luck, and may the best man win.