On October 4th Apple is holding an iPhone event where we expect to learn more about the next iPhone. Apple is also expected to announce an iOS 5 release date and share more details about the software which will come to most iPhones on or around October 12th.

While details are still fuzzy on the iPhone 5, we know a lot about iOS 5, which will help the iPhone compete with Android and Windows Phone 7.

Apple has been singing the praises of iOS 5 since it was announced this summer and many of us at GottaBeMobile have been using it on our iPhones and iPads in a beta format since shortly after it was announced.

Based on my time with iOS 5, Apple has made some important additions and now bests Android in several areas, but I’m looking forward to iOS 6, and hoping that Apple includes the following features in time for a 2012 iPhone.

If this sounds like a constant complaint, well it is. The iPhone and iOS lead the way in many areas, especially with iOS 5, but the lack of a built in map app that delivers real turn by turn navigation is a major disappointment, especially in 2011.

Here is an example of Google Maps Navigation from a year ago, which is still better than the out of the box map app on the iPhone.

Yes, you can purchase an app like Navigon for $60, but I think we can all agree that turn by turn GPS directions should be a built in part of any respectable smartphone.

Apple shouldn’t have any qualms about replacing existing apps. The company has a history of bringing new features to iOS that replace the need for third party apps — the most recent being the To Do app which is part of iOS 5.

Now that Apple has fixed notifications, widgets are where the company should focus their attention. Android has supported widgets for years, and like turn by turn navigation, this feature is long overdue.

Widgets allow you to place a small live tile on your phone, which can be as small as an icon or as large as the whole screen. These are essentially live icons that can show you the weather, your emails, social network updates, various time zones and much more. It is hard for me to imagine using a mobile device without at least some form or real widget support. 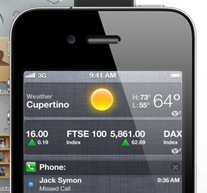 The Notification center in iOS 5 has Apple’s first stab at widgets, but relegating them to a pulldown defeats the purpose of fast access to all types of information. At this point it isn’t clear if Apple will allow third parties to create widgets for the notification center.

One common reason for not supporting widgets is that they reduce battery life. I assume that Apple will come out with widget support sometime in the next iOS release, and claim that their way is better.

The iOS keyboard is more usable now that I know of this handy trick to access numbers and punctuation, and the custom keyboard shortcuts will help you type faster, but you still have no choice.

On Android there are a number of high quality keyboards like Swype and Swiftkey, both of which offer great autocorrect, prediction and new ways to type. If you need access to a number or punctuation, you can long press a key for an alternate character, which saves loads of time.

Here is a look at how switchable keyboards can improve the overall user experience.

Swiftkey can learn from your emails, Twitter, Facebook and text messages so that it knows what you are going to type. For example, if I type the numbers of my street address I can fill in the rest of my address by pressing the space bar a few times, including punctuation. This also works on phone numbers and Swiftkey can autocorrect to add in the usernames of people I am messaging on Twitter. It is incredible to watch and makes typing on the iPhone feel slow.

In the past week, Swiftkey has reportedly made me 36% more efficient thanks to predictions and autocorrect. This stat can get even higher, but I just installed a new version of the keyboard.

Despite these shortcomings, iOS 5 has a host of great new features that will deliver a new experience across the iPhone line. iOS 5 will bring new life to iPhone 3GS and iPhone 4.

For more information, read: What to Expect from iOS 5, and watch the iOS 5 Overview video below.

Keep your eyes peeled for more in-depth coverage of iOS 5 and the iPhone 5.