Star Wars Battlefront has been out for several weeks now but we’re still learning about the game and it’s content. Today we want to pass along a few details that you may not have known including a little known feature about AT-ATs.

In November, DICE and EA released Star Wars Battlefront for Xbox One, PS4 and PC. The new Star Wars title puts gamers into the shoes of famous heroes and villains on famous planets like Hoth, Endor and Tatooine.

While the game has been met with mixed reviews, there’s no denying that this game looks and feels like Star Wars universe. It’s an easy game to pick up and play and it’ll hold fans over until the release of Star Wars The Force Awakens later this month.

Over the past few weeks we, like many others, have been digging through the game finding easter eggs and coming up with useful tips along the way.

While much of the game has been uncovered, we continue to see new and exciting details emerge. The latest details come from EA and DICE themselves who have relayed some interesting statistics about the game.

The companies have released an infographic that showcases some game statistics that weren’t available before today and these stats shed light on a few features you might not have been aware of during your time with Star Wars Battlefront. Let’s start with two of the more interesting Star Wars Battlefront stats. 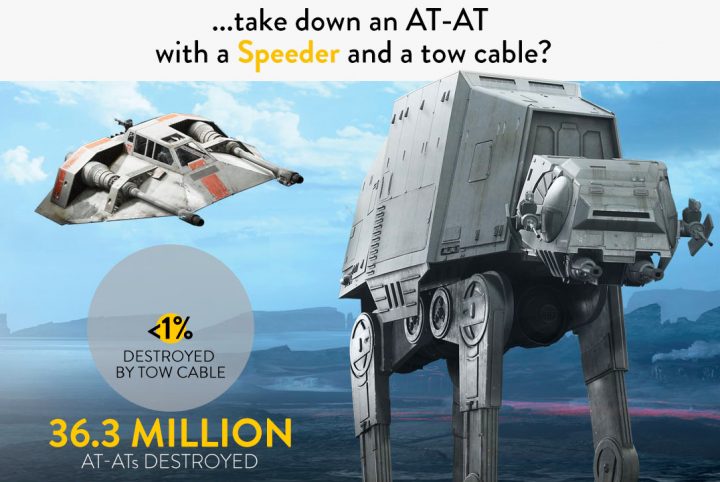 Since release, 36.3 million AT-ATs have been destroyed in game but less than 1% of them have been destroyed via tow cable from the speeder. It’s a hidden feature though it’s not hidden anymore. We expect attempts to pick up now that this statistic has been made public.

If you didn’t know already, the Star Wars companion app Base Command is a great way to keep up with your character. It’s also a great way to earn in-game credits that can be put towards your equipment and more.

EA and DICE claim that over 1.1 billion credits have been earned since the game’s release. This is another hidden feature that many casual gamers might not have known about.

The companies also claim that more than 2.4 million Stormtroopers have been hit in the head by rocks thrown by Ewok’s on Endor. We’ve had this happen a few times and it’s hilarious every single time. If you haven’t had it happen to you yet, head to Endor. 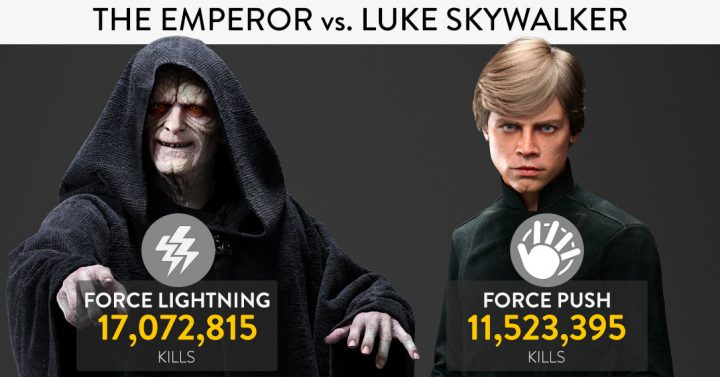 There are several other stats that you didn’t know about until today. Here is a rundown of the seven other Battlefront statistics:

Earlier this week, EA and DICE released the free Battle of Jakku DLC for all platforms bringing new maps and a new game mode to PS4, Xbox One and PC users.

The company is expected to deliver new vehicles, weapons and more with its paid DLC next year. The company is currently selling a $50 Season Pass that will net gamers all four planned Star Wars Battlefront Expansion packs.