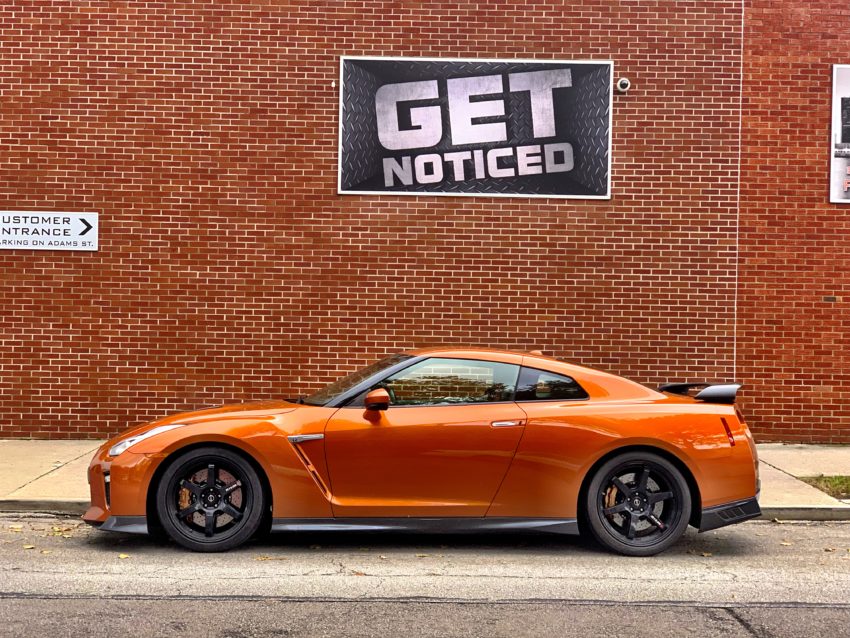 You’ll definitely get noticed in the 2018 Nissan GT-R.

For close to a decade I’ve been driving a Nissan GT-R in video games. I’ve been gaming longer than I’ve been writing about cars, but I always knew there was something special about the GT-R.

As fall arrived and snow threatened, Nissan delivered a 2018 GT-R Track Edition in the same orange (blaze metallic) that I’d choose if I were putting my money down, and the same color I’ve driven in countless games.

The 2018 GT-R is capable of being your daily driver. The interior is better suited to comfort with heated Recaro seats, technology upgrades include Apple CarPlay on the head unit with Waze warning you of tickets waiting to happen and all around it’s more welcoming than the earlier models. The only feature I definitely missed while driving was blind spot monitoring. It’s not a deal breaker by any means, but on crowded highways, it offers an extra level of awareness. If you want to trade some performance for more luxury, look into the 2018 Lexus LC500.

While the GT-R is more refined than ever, it’s still fast, ferocious and loads of fun. The hand-built V6 engine with two turbochargers and the spine rattling launch control see to that.

“Is the Nissan GT-R a supercar?” is one of the most asked questions about Godzilla. While I cannot give the definitive answer on this question, having driven the GT-R on the track and for a week as my daily driver it definitely feels like it belongs in the club. With an amazing All Wheel Drive system and impressive track times in the hands of experts, I’d mark this solidly in the yes column. 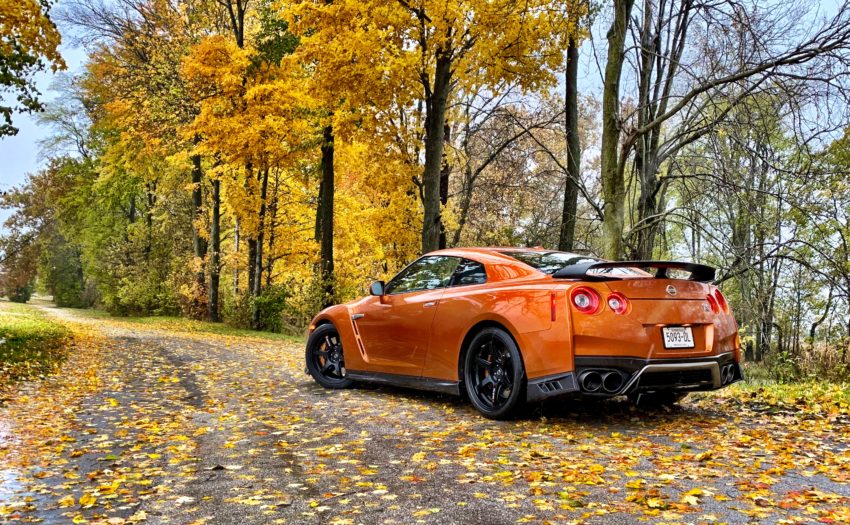 The Nissan GT-R is fast, fun to drive and the AWD system inspires confidence.

The 2018 Nissan GT-R breaks with the norm by placing a twin-turbo V6 under the hood instead of a V8. With the handbuilt 3.8L V6 engine you get 565 horsepower and 467 lb.-ft of torque, and you get pretty impressive fuel economy on the highway. While there is turbo lag on the GT-R the epic Launch Control allows you to build up the power and take off like a shot for an amazingly quick 0-60 time of around 3 seconds — depending on the trim and your skill.

The All Wheel Drive system is incredibly capable, proving itself time and again on wet and leaf coated roads during my week with the GT-R Track Edition. While testing a 2017 GT-R Track Edition on a damp track I was also impressed with the performance while pushing it harder on a closed track. The system isn’t like a standard AWD setup, it continually adjusts the power and braking on each wheel based on your steering and braking to help reduce oversteer and understeer.

Acceleration is very fast, especially when you use Launch Control. The GT-R also stops quick thanks to massive brakes that deliver the confidence you need to both get up to speed and come back to a stop quickly.

On the GT-R Track Edition you get a sprinkling of Nismo. This includes a Nismo tuned suspension and Nismo Forged Alloy Wheels as well as a Carbon Fiber rear spoiler. These are nice upgrades without bumping up to the $175k Nismo edition. 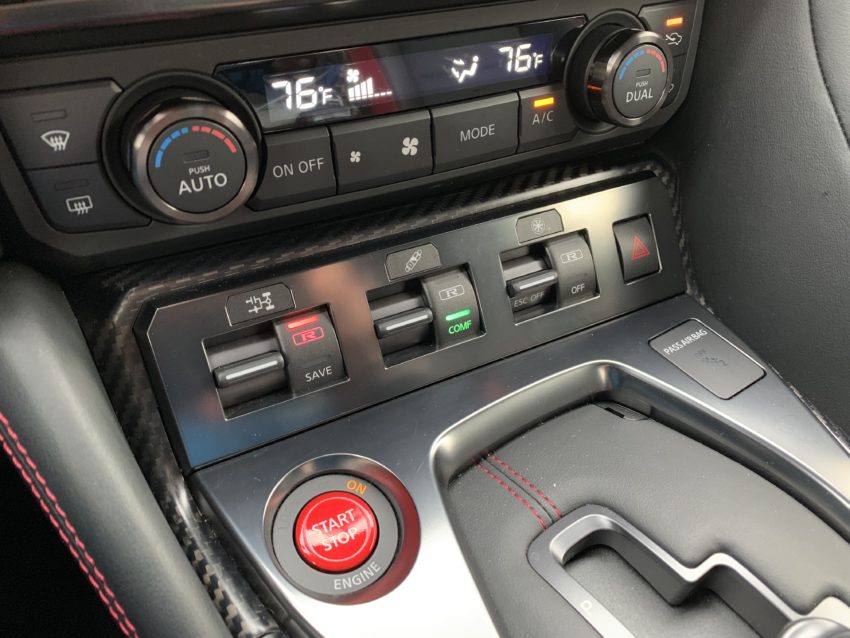 Control your driving modes with three switches on the dash.

All of the GT-R trim levels come with a six speed Dual Clutch transmission. There is no manual transmission available. There are some times where downshifting takes a tick longer than you’d like but overall I came away impressed with the speed and the performance of the DCT system. When I needed to pass on the highway pushing the gas to the floor dropped to 3rd gear where there was plenty of power so I could rocket around slow traffic.

Three buttons on the center console control drive modes. R is the performance mode with quick shifts, suspension, shocks and the Vehicle Dynamic Control system (aka the brains of the AWD) to the optimum settings for handling and speed. Normal mode offers a more refined ride suited for daily driving the GT-R. You can also toggle on a comfort mode for the suspension which is handy on longer drives.

I wish the 2018 GT-R delivered a more guttural exhaust note. It doesn’t detract from the quickness, but the exhaust sound is such a visceral part of a supercar that it’s an area where Nissan could push further. With the titanium exhaust system and the active sound enhancement you hear more of the GT-R when driving, but it still lacks a distinctive sound to further connect you to the car and the driving experience. 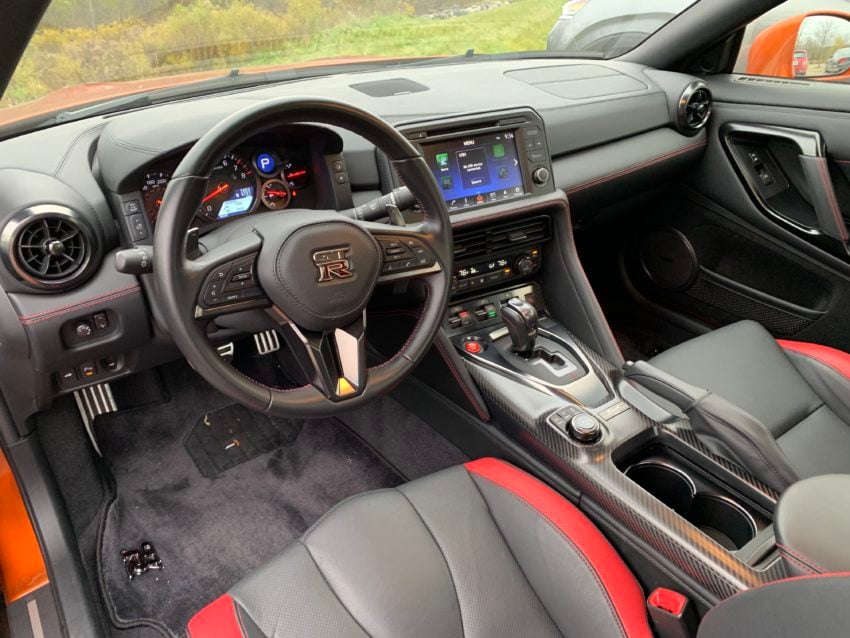 Starting with the 2017 model and carrying over to the 2018 Nissan GT-R interior we see a more refined experience. Nissan removed a lot of switches and controls from 2016 to 2017, made the touch screen larger and improved the comfort and style throughout. These changes make the GT-R more suitable as a daily driver without taking much away from the performance that draws buyers to this car.

The Recaro front seats are power adjustable and heated, which came in handy as winter threatened at the edge of fall. These seats are comfortable even for a larger driver like myself, but they still did a great job of keeping me in place while pushing the car around twisty country roads.

Leather and carbon cover the interior to deliver an upscale look that is much closer to what you’d expect on a car that starts at $99,990. It’s not as plush as the LC500, but you’ll need to give up acceleration if you go that route.

This is still a race car, and while there is a noise deadening windshield and a button to quiet the exhaust on the Premium and up trim packages you will still hear more of the road and more of the noises a car makes. This did not impede conversation, but many passengers asked about noises they don’t typically hear in their cars that are packed with sound deadening material that adds a lot of weight.

If you are torn between buying an older GT-R and going with a 2017-2018 model, make sure you pay close attention to the interior. If you plan to daily drive it the difference is worth it.

Rounding out the updated interior is an 11-speaker Bose stereo that is quite good. If you don’t want the weight of the sound, you can opt for the Pure trim level. All the trim levels include Apple CarPlay on a nice 8-inch touch screen. There is no Android Auto support.

I spent most of my time using Apple Carplay as it offers the fastest access to what I need in the car. However you also get a very nice digital instrument panel on the dash when driving stats and gauges are more important than Waze and Spotify. You can control the screen with a tap, or you can use a small dial on the center console. Bluetooth connectivity lets you make calls and stream music. There are two USB ports in the center console that you can use to charge and to connect to the infotainment system. When starting Apple CarPlay most of the time I had to unplug and plug my phone back in to get it to work, but once it started working it stayed connected. 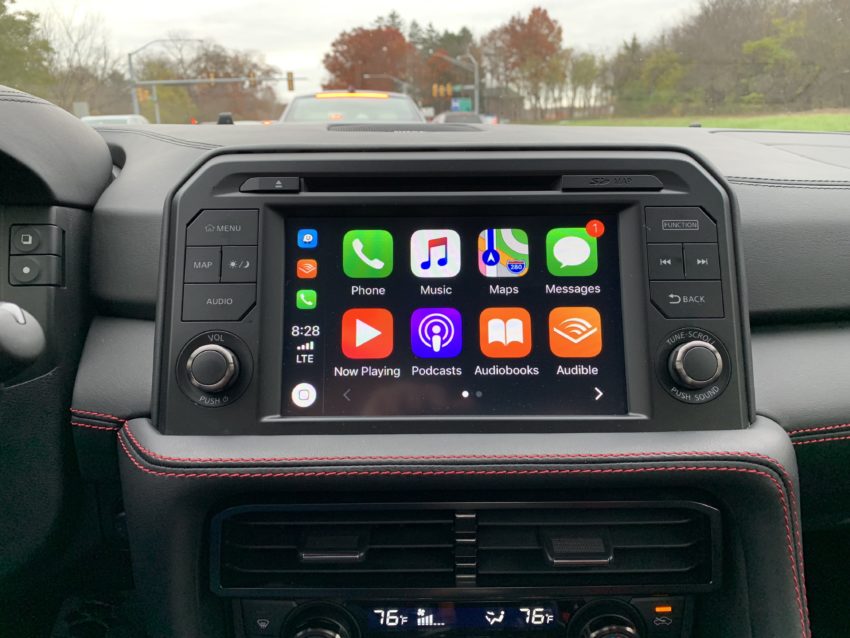 With Nissan Connect you can lock, unlock, remote start, sound the horn and locate your car using your smartphone. There are also speed, boundary and curfew alerts in case you are for some reason letting your 17-year-old tear around in the 2018 GT-R.

Press the buttons to the right of the display and you’re rewarded with beautiful gauges and graphs for a wide range of details that are helpful on the track or on an empty stretch of road. The digital dash display looks like it was pulled right out of a video game, and there’s some truth to that. Polyphony Digital, the company who makes PlayStation Gran Turismo racing games designed the system.  The gauges are beautiful and a really cool addition to the interior.

The LED headlights deliver great night-time visibility and there are an array of standard safety features included. What we don’t see are many driver convenience features. There is no Blind Spot Monitoring system and no adaptive cruise control. While I never felt the need for adaptive cruise, even on long highway trips, I wish the GT-R features a blind spot monitoring system with rear cross traffic alert for an added layer of protection while backing out of parking spots and switching lanes.