DICE is rolling out a brand new summer Battlefield 1 patch ahead of the Battlefield 5 release this fall. The July update isn’t as big as the June patch, but it delivers essential bug fixes for ongoing issues plaguing the Xbox One, PlayStation 4, and the Windows PC.

June marked the end of monthly patches for Battlefield 1, but DICE’s cooked up yet another update for release on all three platforms.

Server downtime is over and the July Battlefield 1 update is now available for Xbox One’s, PlayStation 4’s, and Windows PCs around the world.

The developer’s June patch, also known as the Shock Operations update, delivered a new mode along with bug fixes, tweaks, and enhancements. The July patch doesn’t come with a new game mode, but it does come with one substantial change for Xbox One X users.

In this guide we’ll take you through all of the changes and everything else we know about the July Battlefield 1 update. Let’s start with the release date.

When you fire up Battlefield 1 up today you’re going to encounter DICE’s summer update. It’s a mandatory patch for anyone still wanting to play Battlefield 1 online.

If you’re playing Battlefield 1 on the Windows PC and you’re running the most up-to-date version of the game, you’re looking at a 4.2GB download.

If you’re playing Battlefield 1 on the PlayStation 4 and you’ll all caught up with patches, you’ll be forced to download a 5.1GB update.

If you’re interested in hearing about the changes directly from EA DICE, you can tune into a live stream on July 31st/August 1st. The stream will dive into the summer update’s changes. 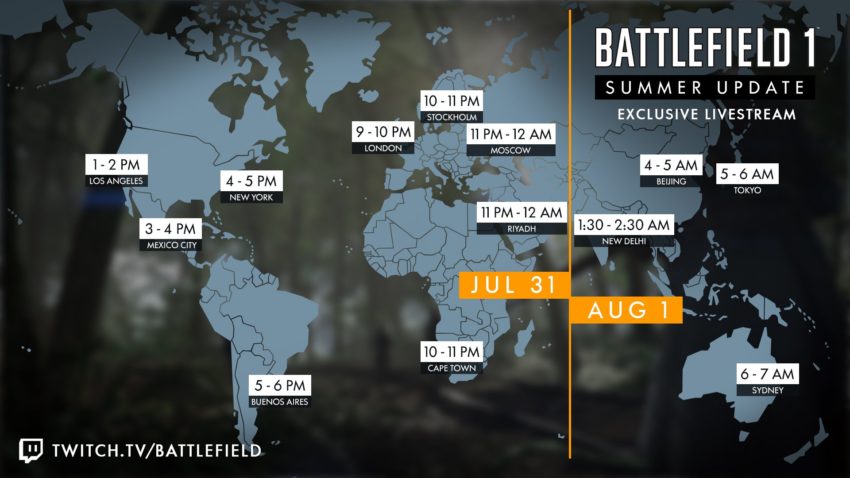 The live stream kicks off 1PM Pacific on July 31st and lasts an hour. You can find the stream on Battlefield’s Twitch channel.

DICE’s summer update for the Xbox One X comes with one notable change.

That’s a big deal for those who’ve adopted Microsoft’s new console and it’s a good reason to jump back onto the battlefields of Battlefield 1.

The July update is comprised of two types of changes: Bug fixes and tweaks. The tweaks include some changes to the Options menu, changes to sectors on Lupkow Pass and Zeebrugge, and some additional changes.

The July patch also delivers bug fixes for some of the game’s ongoing bugs and issues. These include:

It also sounds like the July update includes a fix for an EOR (End of Round) black screen and loading issue. The fix wasn’t included in the CTE’s change log, but it should be present in the final build.

Now that the July update is out, there’s no telling how long we’ll have to wait for the next one. We expect support for Battlefield 1 to continue, but you can expect updates to be far more sporadic as the company shifts its resources to Battlefield 5.

As for the next version of Battlefield, DICE is planning to launch an open Battlefield 5 beta in September ahead of the game’s release this fall. It also plans to showcase a new Battlefield 5 build at Gamescom in late August.

Battlefield 5 launches in October on Xbox One, PlayStation 4, and Windows PC.