There are two different Anthem editions you can buy, with different levels of access and bonus items. You need to figure out which Anthem edition to buy since there are a number of differences and a $20 price difference.

If you buy the more expensive version of Anthem you get more bonus items and other extras. You can already find some Anthem deals with EA Access, Origin Access,  and Gamers Club Unlocked if you still have a subscription..

You can also opt for a third Anthem edition if you are on PC and want to subscribe to Origin Access Premier which gets you full access to Anthem, without buying the game.

Here’s how the two editions stack up, and what you need to know to figure out which one you will buy. 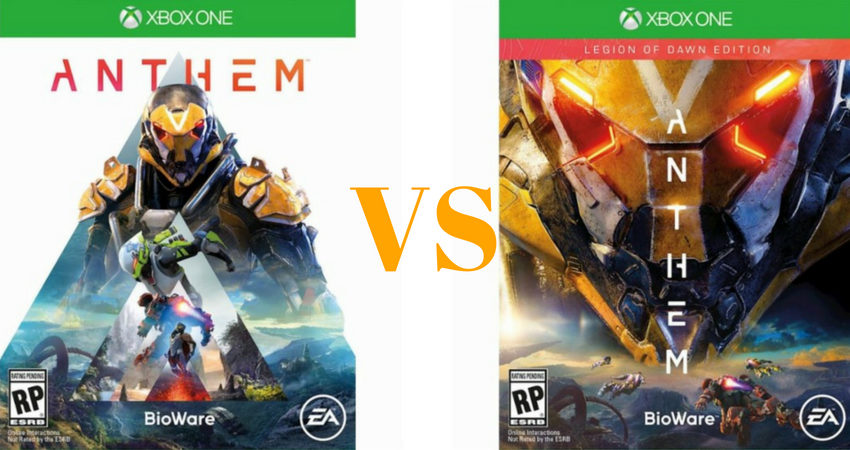 Which Anthem edition should you buy?

The Anthem release date is February 22nd. You can play Anthem early with EA Access and Origin Access. Anthem is available on PC, Xbox One and PS4. There is also an Anthem VIP Demo that you can access with a pre-order.

Anthem is available at Best Buy, GameStop and other retailers. You can also buy Anthem digitally on Xbox or the PlayStation Store.

The Anthem standard edition is $59.99 and it comes with the base game as well as pre-order bonuses. You can save $10 when you pre-order Anthem at Best Buy, through a reward certificate. You can save 10% upfront at Newegg.

With this version of the game, you get access to pre-launch demos if you pre-order. EA describes this as VIP Access, which means you can play early, but you can also play early with EA Access or Origin Access.

If you pre-order you also get the Founders Player Banner and the Ranger: Legion of Dawn Legendary Armor Pack & Weapon.

Casual players, who are interested in Anthem, but aren’t quite sure if this will be their game may want to go this route. Keep in mind you can cancel this pre-order at a physical store and upgrade to the Anthem Legion of Dawn edition if you decide during the beta that this is a game you love.

Buy Anthem at Best Buy, Newegg, GameStop and digitally through Xbox, PlayStation or Origin for $59.99. 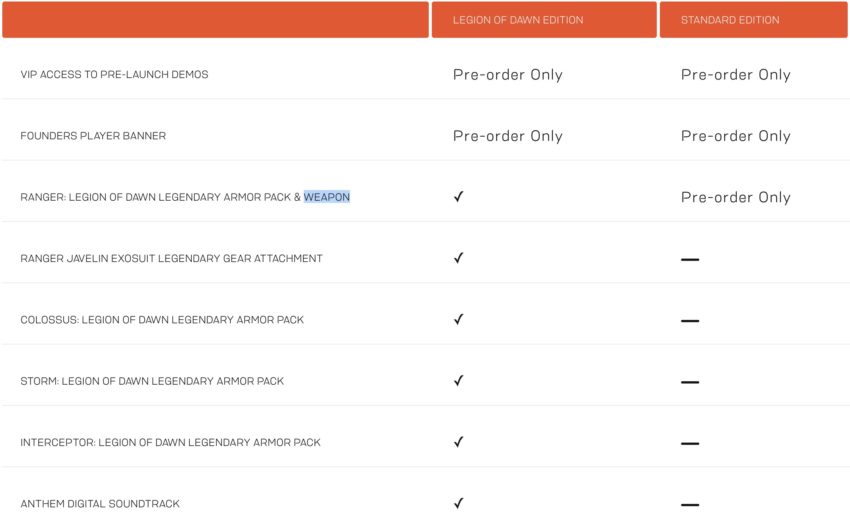 What’s different in Anthem and Anthem Legion of Dawn.

The Anthem Legion of Dawn edition is chock full of extras. Despite saying that it is not pay to win, you will get many added Javelin suit attachments and armor if you spend $20 more on the Legion of Dawn. This is the version of Anthem you get with Origin Access Premier.

There is no early Anthem release date if you buy the Legion of Dawn edition, but you do get the following items;

This is in addition to the Founders Player Banner and the Ranger: Legion of Dawn Legendary Armor Pack & Weapon. You also get VIP Access to the public pre-launch demos.

This is for gamers who think they will fully invest their time into Anthem. If you already have a squad of players in mind who you will play with, you may all want to invest in the Anthem special edition so that you start off at the same level.

Buy Anthem Legion of Dawn at Best Buy, Newegg, GameStop and digitally through Xbox, PlayStation or Origin for $79.99

You can buy EA Anthem on disk or digitally. This all depends what you want out of the game. The price is the same, other than going with Origin Access Premier on PC.

We typically see more deals on the physical version, cutting up to 20% off the game with some memberships. If you buy Anthem on disk, you can also resell the game if you decided the game isn’t too your liking. If you think you might resell the game, you may want to go with the base version since you can’t sell the bonus items once they’ve been redeemed.

The digital edition of Anthem makes it easy to play and switch between games without swapping disks. I like to buy a few games digitally so I can swap easier and keep one of the games in the drive. With a digital version of Anthem, you can also pre-load if you buy direct from Origin, Sony or Xbox.