It took months but DICE has finally confirmed the first Battlefield 1 Double XP event for Xbox One, PS4 and Windows PC.

Last year, DICE promised double experience opportunities to gamers down the road and it’s finally making good on that promise. 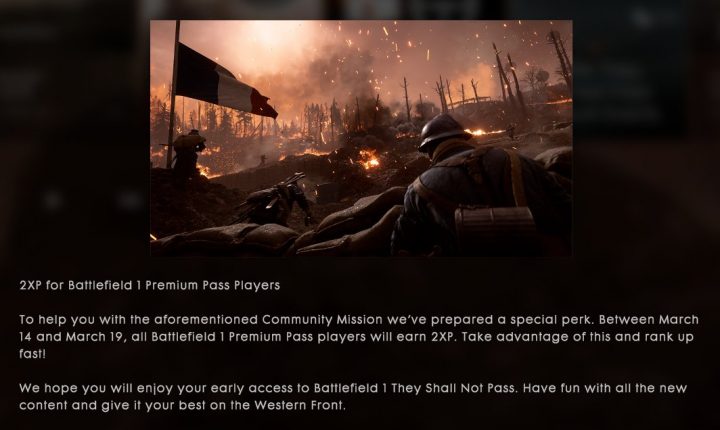 The first Battlefield 1 Double XP event starts on March 14th and it stretches all the way to March 19th giving Battlefield 1 users a chance to earn a ton of experience points while experiencing all of the changes included in the They Shall Not Pass DLC.

It also looks like Squad XP boost stacks with the Double XP so gamers will want to be sure to use those if they emerge from a battlepack.

Unfortunately, the double XP week isn’t available to everyone. Only Premium Pass holders get access to the XP boost. For now, at least.

The Battlefield 1 Premium Pass is the game’s $50 Season Pass that nets gamers all four DLC expansion packs, access to the Battlefield 1 CTE, Battlepacks, and more. It’s also the only way to play They Shall Not Pass right now.

Battlefield 1 Premium Pass holders gained access to They Shall Not Pass on March 14th. Everyone else can purchase the DLC as a standalone expansion starting March 28th. We expect it to cost $15 on its own.

They Shall Not Pass delivers tons of new content including two new Operations, the French army, new weapons, new gadgets, new vehicles, four new maps, and a whole lot more. It’s the first Battlefield 1 DLC but it won’t be the last.

DICE is planning three more Battlefield 1 DLC packs. And while we have their names (In the Name of the Tsar, Turning Tides, Apocalypse) and some early details, we don’t have release dates for the trio.

The developer typically puts a few months between its DLC releases so don’t expect In the Name of the Tsar to emerge in April.