In this guide we’ve gathered a list of the best routers under $100 you can buy in 2020. Cheap WiFi routers that offer fast internet speeds, long range, great security and lots of useful features. Whether you stream tons of videos, work from home, are a hardcore gamer in a 2-story house or need a mesh router with parental controls, we have you covered.

You probably have both a modem and a WiFi router, and you likely rent one for around $5 a month from your internet provider. Don’t believe me? Check your bill and you’ll see a rental charge. With our help, you can ditch that fee and get better more reliable internet.

Our list of routers will save you money while delivering faster internet speeds, longer range, better 4k streams, better performance, and more features.

The Best Cheap Routers in 2020

Describing the features of a router can sound like a foreign language to some people. So, to keep things simple, just know that if you’re looking for the best overall combination of price, speed, performance and coverage, the TP-Link Archer C7 is your best bet. We’ll start with it. Or, the same router with Alexa support (the A7) is a great choice too. 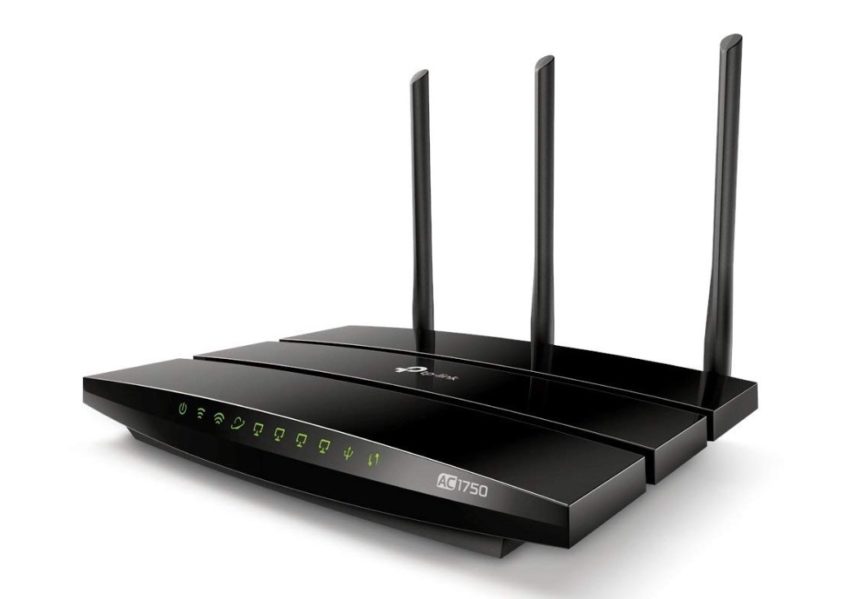 Basically, if you don’t want to drop hundreds of dollars on a router, get the Archer C7. It received an Amazon’s Choice award, has nearly 18,000 positive reviews, and almost the entire internet will say it’s the best cheap router available in 2020.

This is a fast Dual-Band (2.4 GHz and 5 GHz) Gigabit router with the latest 802.11ac standards, theoretical internet speeds of up to 1,750 Mbps and six antennas to cover every corner of your house. You’ll also enjoy two USB ports for media sharing, a 2-year warranty, QoS, and the option to flash custom software like DD-WRT for all you enthusiasts. It’s the perfect WiFi router for 4k streaming and HD gaming, yet has parental controls and is easy enough to use for any family.

Another great choice is the NETGEAR Nighthawk series, which focuses on speed, reliability and range. The Nighthawk R6700 Dual-Band Smart WiFi router does a little bit of everything and is a fan-favorite for gamers. 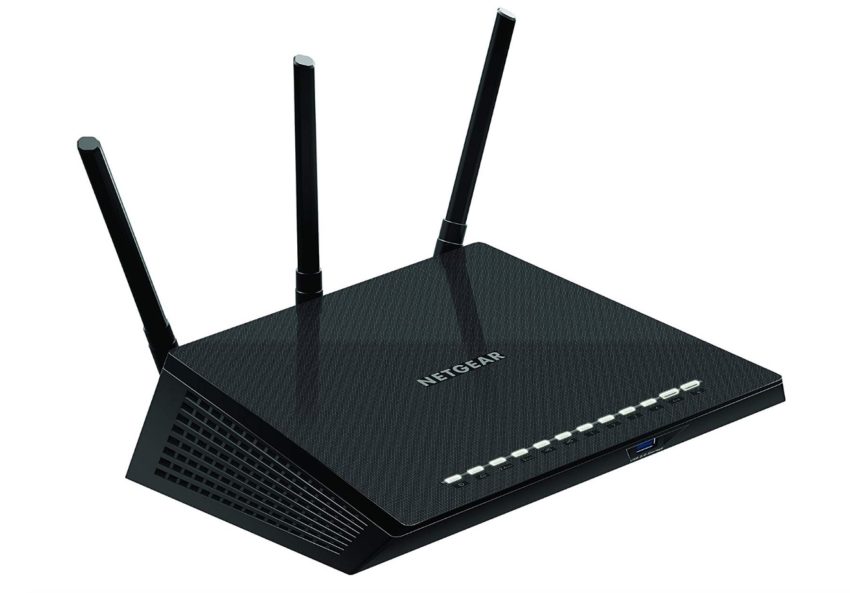 The Nighthawk AC1750 is the ideal router for homes with multiple WiFi devices, plus it has three antennas on the inside and three more on the outside for an extra-long range. Essentially, it’ll blanket your entire house with the internet. It’s powered by a 1 GHz dual-core processor, offers theoretical speeds of 1,750 Mbps (400 + 1350) and has a lot of features like prioritized bandwidth for gaming, streaming videos, or music. That includes beamforming. This is a great router for gamers.

We like the easy on/off switch on the back, QoS, quick parental controls with the companion mobile app, and the front USB 3.0 port for media streaming from a thumb drive.

Plus, NETGEAR routers support Circle with Disney, which offers some of the best parent controls and content filtering on the market.

If our first few suggestions are too expensive, or you don’t need to pay for the fastest speeds possible, a great alternative is the ASUS ACRH13. It’s one of the best Dual-Band WiFi routers for around $60, with the added benefit of 2×2 MU-MIMO technology. It’s just a great all-around router for those that just want something that works great and is better than what they have. 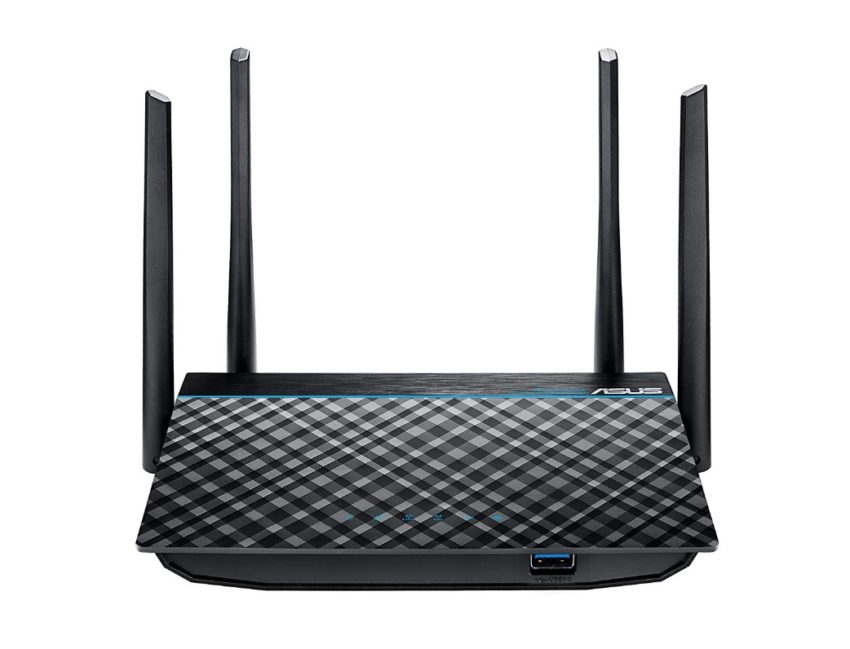 This is the router I use to stream live TV with Sling TV, play Xbox, and has at least 10+ devices connected to it at any given moment. The ASUS AC1300 supports the latest 802.11ac standard, dual-band gigabit speeds, and has four external antennas you can aim where you want for the best coverage in your home.

Plus, the MU-MIMO (multiple input/output) technology allows the router to communicate with multiple devices simultaneously, instead of one at a time. We love the effortless setup interface, accompanying Android or iOS app for QoS and parental controls, and the front-facing USB 3.0 port. It’s a great little cheap router for those on a budget.

If you’re looking for the latest and greatest technology without breaking the bank, we managed to find a WiFi 6 router for around $100. NETGEAR has a new line of RAX routers that are pretty great. This supports the absolute latest 802.11ax standard, and is compatible with new WiFi 6 devices like the iPhone 11 Pro, Galaxy Note 10, Galaxy S20 and will support everything coming in the future. 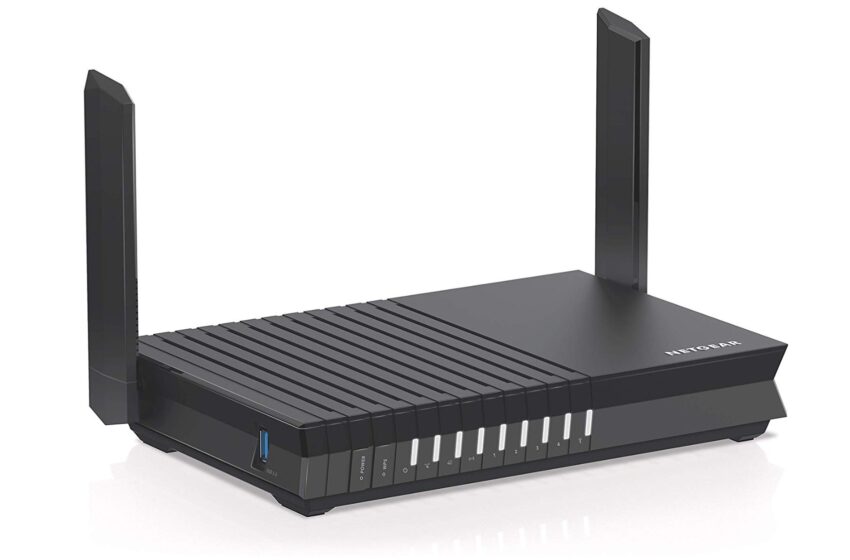 Like most routers on our list, this NETGEAR multi-stream router is super fast and supports dual-bands with long-range coverage for both 2.4 GHz and 5GHz networks in your home. Furthermore, this offers fast AX1800 speeds (not AC1800). You’ll get beamforming support, Quality-of-service to totally control your network, Alexa support, intuitive parent controls, and 600 + 1,200 Mbps speeds.

Part of what makes WiFi 6 so special, and a router like this, is you can get fast Gigabit WiFi speeds on up to four devices at the same time. That way any one person streaming or gaming in the household doesn’t steal all the bandwidth speed. Everyone can get fast internet at any spot in your home. This also has USB ports, Alexa voice support, and an easy guest wifi addon.

Similar to the ASUS mentioned earlier, this next router from NETGEAR is a great option for those on a budget. If you don’t need high-end speeds, tons of fancy NAS features, and just want fast and reliable internet, give the NETGEAR R6230 a try. 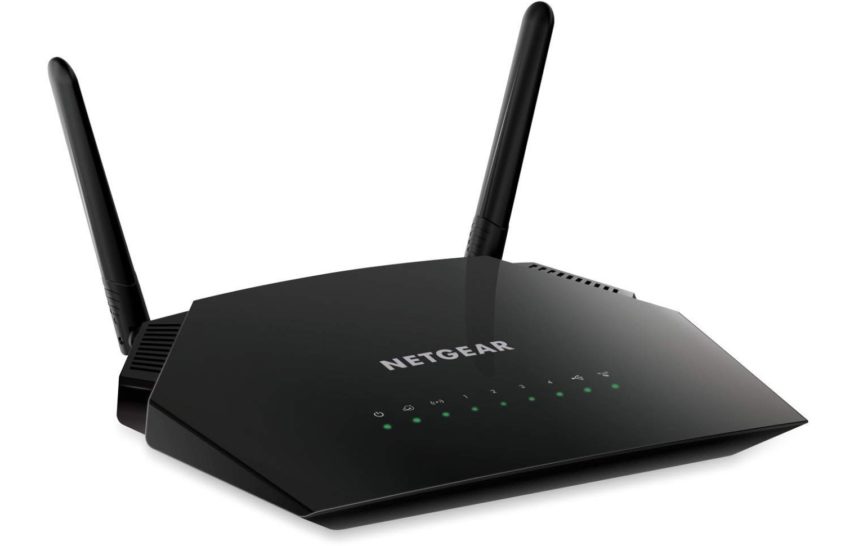 Basically, this is a solid alternative if you don’t need speeds the Archer C7 has to offer. It has fast theoretical speeds of 300 + 900 Mbps on 2.4 GHz and 5 GHz bands, beamforming, dynamic QoS controls, and tons of tweaks to improve your streaming or gaming sessions.

Plus, this cheap router works with the Nighthawk app, making it a breeze to setup and manage. Like the others on our list, you’ll get 4 LAN and 1 WAN Ethernet ports, and a USB 2.0 port for attaching media storage devices.

Next up is the ASUS Wireless-AC1700 Dual-Band Gigabit Router. This is a high-end feature-packed device that can rival the Nighthawk and most more expensive routers, yet it’s only $79 and often on sale. 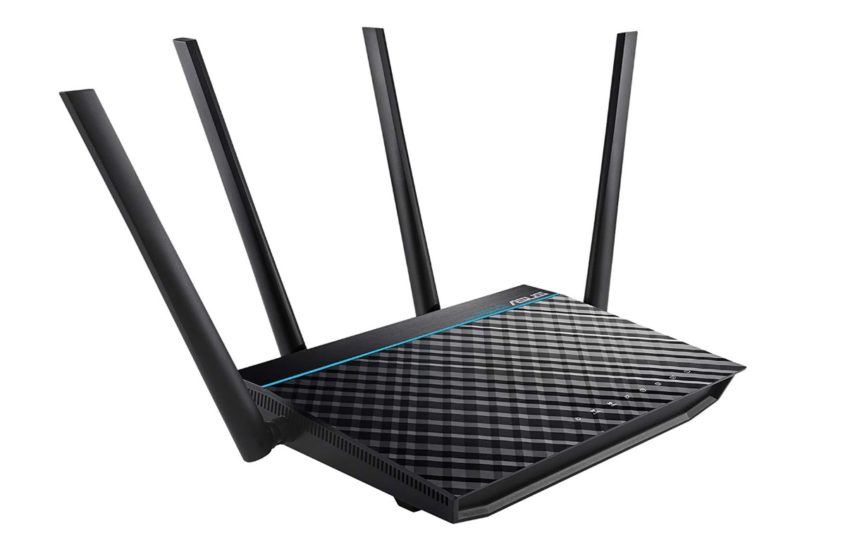 This router packs a powerful Quad-core processor and 256MB RAM that helps optimize network traffic and connectivity speeds from the USB 3.0 port or ethernet ports. Plus, it delivers concurrent dual-band (2.4 + 5 GHz) speeds of 400 + 1300 and it packs in the latest 802.11ac and 3×3 MU-MIMO technology.

We like the four external multi-directional antennas, beamforming controls, intuitive setup interface UI, and the companion ASUS router app. Once you plug everything in and download the app, setup takes around 30 seconds with 3 easy steps.

You can easily manage all the speeds, WiFi channels, QoS, and parental controls inside the app. Not to mention turn on alerts and notifications for network-based events.

While the Archer A9 near the bottom of our list is technically a little faster than this next recommendation, the Archer AX series is the newest generation of routers from TP-Link. They’ve offered some of the best budget WiFi routers for several years, like the aging C7 or A9, and you’ll love their newer WiFi 6 options. 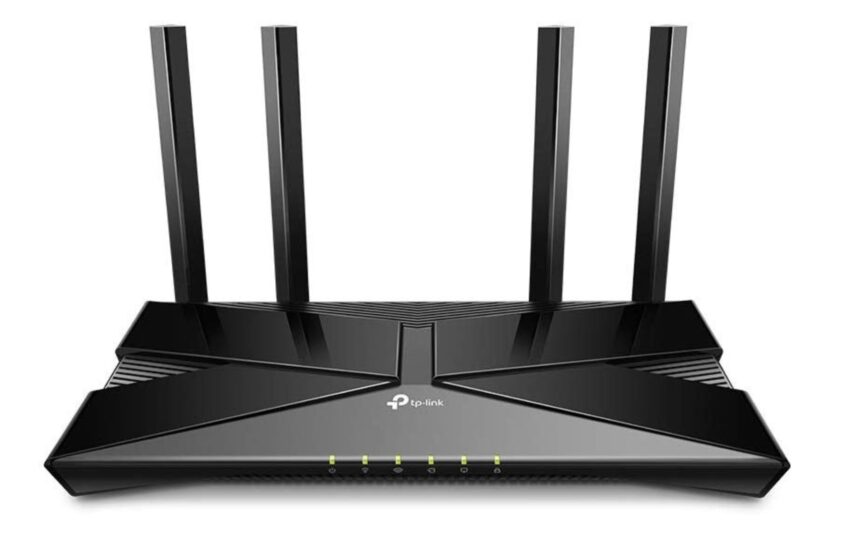 One of the best WiFi routers for around $100 in 2020 will be the Archer AX1500 and AX3000 for several reasons. They’re built for the future and have all the latest technology. We’re talking about the brand new WiFi 6 (802.11ax) protocol, which your next smartphone and HDTV will likely have, or already does if you have an iPhone 11 or Galaxy Note 10/S20. Not to mention lots of WiFi channels, parental controls, QoS, gigabit speeds, dual-band support, OFDMA, MU-MIMO, and more importantly — smart features.

The AX series all work with Amazon Alexa, and have several other “smart home” features that most cheap routers don’t offer. This is one of the best and most future-proof routers on our list.

The next wireless router on our list is one that might not be the absolute best or the fastest, but that’s not what everyone is looking for. Some people want a reliable fast router, and some just want an enjoyable simple mesh router. Google’s original WiFi router offers an incredibly easy and enjoyable experience at an affordable price. 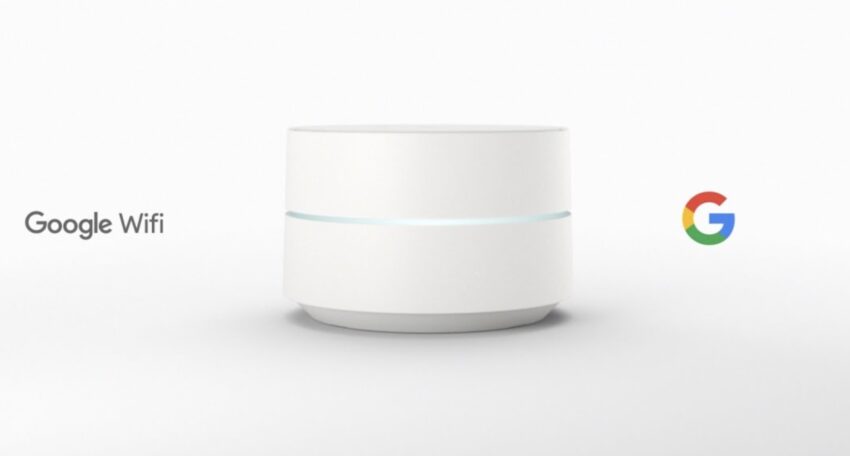 While the search giant recently released a newer and faster Google Nest Wifi, it’s too expensive. Instead, the original Google WiFi still delivers a great experience that’s very very simple to use, looks good, and takes about 3 minutes to set up. Plus, you can instantly buy another Google Router and use the Home app to add a second router in another room or upstairs in a matter of seconds.

Google WiFi makes Mesh WiFi so easy that a caveman could set it up — and so can you. That’s in addition to everything else people enjoy from Google, all the smart home options with the Assistant, parent controls, QoS, and more. Personally, the biggest selling point is that you could get this for your grandparents and they’ll be able to set it up themselves. For set up, you download the app, take a photo of the back of the router with a phone, choose a password and you’re all set. It’s fast, stable, reliable and easy WiFi.

If you have a big house but don’t want to mess with WiFi extenders or a mesh system, consider the Motorola MR1700. This thing is affordable, powerful, and will cover your entire home with the internet. 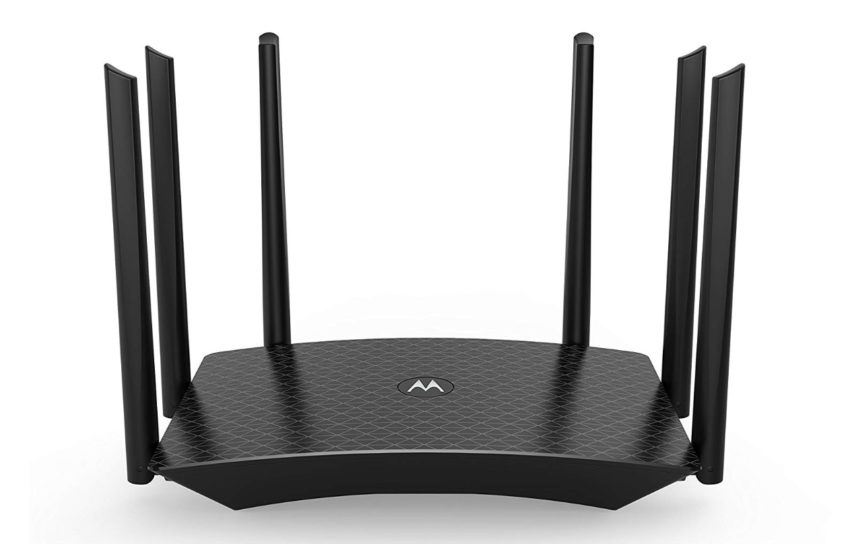 Like most affordable routers on our list, the Motorola MR1700 has fast speeds and all the features one would want. Additionally, there are six oversized antennas you can aim every which direction to cover the garage, backyard, upstairs and more. If you need a router with long coverage, get this.

Four antennas deliver the 2.4 GHz band, which reaches further and is more stable but not quite as fast. Then, the other two are for 5Ghz speeds which you’ll want to use for gaming or video streaming. Similar to more expensive options, it does concurrent dual-band WiFi, has four ethernet ports, and an easy setup process.

Last but not least, for now, is the TP-Link Archer A9 and C9 series. Similar to the model at the beginning of this post, the C9 is an extremely popular, powerful and fast router. And the A9 model is the same, only with Alexa built-in making it the best smart router. 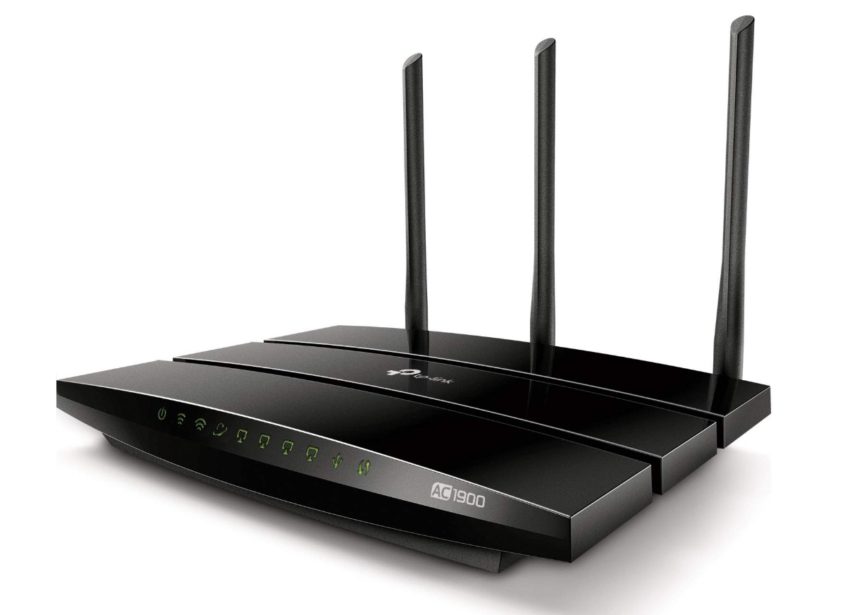 The Archer C9 is potentially the best router on this list, the fastest with (AC1900 speeds) and originally it cost over $100. However, now that it’s no longer brand new you can find both models for under $100, which is a screaming good deal. Plus, it goes on sale all the time.

What makes this the best one on our list is the fast 600Mbps at 2.4GHz + 1300Mbps at 5Ghz speeds. Everything else at this price point tops out at AC1700, or less. Meaning both channels on this dual-band router are fast, and it’s an extended range router. With three internal and three external antennas for full-home coverage, simultaneous dual-band performance, MU-MIMO beamforming, smart connect, and Alexa support, you’ll want to buy this. Honestly, the Archer C9 is the best bang-for-your-buck wireless router available in 2020.

There are a lot of great cheap routers that have been released over the years, but these are some of our favorites. And while we’re expecting a few new additions to this list later in 2020, for now, these are still your best bet. You’re getting the latest technology, fast dual-band internet speeds, extended WiFi coverage, strong parental controls or even support for Circle with Disney, and all the features most people will ever need for under $100.

Upgrade your home internet speeds, WiFi range, and security all while saving money by getting yourself a new router. Then, we’ll continuously update this list with any and all the best options moving forward.