Boom Beach is a fun RTS style game for the iPhone and iPad that is from the same company that makes the popular Clash of Clans game. This is not the same type of strategy game as command and conquer, but it is a fun fix for mobile gamers that want to control an army in island based warfare.

Boom Beach takes place in an island setting with in-game currency like gems, gold and diamonds which play a central role in building your defense, mounting an offense and upgrading capabilities. This is nothing new for strategy games, but Boom Beach is heavily tilted to make the player spend real world money on in-app purchases to get more gems, which can buy extra resources and speed the game up. It is still fun to play Boom Beach, but everyone who plays will be tempted to spend cash to avoid waiting between moves.

If you want to progress faster and unlock new buildings, weapons and troops without spending real money you’ll need to use these Boom Beach tips and tricks to have more fun and progress faster.

There are no Boom Beach cheats available at this time, and setting the clock ahead will trigger a notification that a building is complete, but when returning to the game it will still be in process. No combination of changing the time and opening or closing the game works as a Boom Beach cheat to build faster.

Boom Beach is free for iPhone and iPad and is the Boom Beach Android release is coming soon.

Since Boom Beach cheats are out of the question, you’ll need to work on your Boom Beach strategy with these tips to have more fun and progress.

It can take up to two hours to upgrade or add a building as you progress, so it is important to keep exploring and attacking while you are building. You can make new troops while building and upgrading in Boom Beach, but not new ships so keep that in mind. 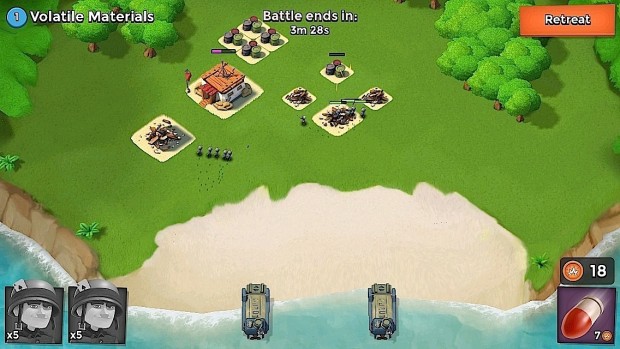 In addition to multitasking, make sure the last action you take before putting the game down is to start a build or an upgrade that will take a while. If you use notification you will get alerts when you can jump in and start another building or upgrade.

In the early stages of Boom Beach gold is plentiful but wood is a hot commodity. If you try to build something that you don’t have enough wood for the game will offer to sell you the supplies using Diamonds, but remember that diamonds are something you’ll need to buy with real money down the road.

Tap on a tree and hit the shovel to turn 600 gold into 300 lumber. This is a pretty fair trade-off in the early parts of the game, especially if you build more residences and free villages to keep the gold flowing.

Upgrade as Soon as Possible 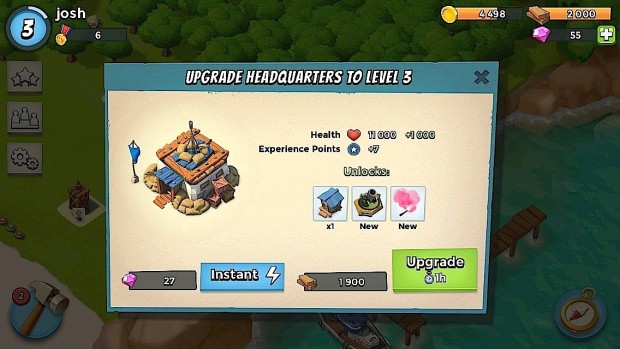 Boom Beach Upgrades are the fastest way to success.

Upgrading the headquarters is a great place to start as it will unlock all of the buildings. If you start doing this early you can get up to a level 5, where things start to open up more.

Diamonds are the in game currency that does not regenerate. We’ll explain how to get some more Diamonds, but expect them to be in low supply to convince gamers to spend cash on a the free Boom Beach game.

It may not make sense to use 7 Diamonds to make a building complete instantly, but if you need to get started on something else you can often trade in 1-2 diamonds later in the build process for an instant gratification. That is a much better spending decision.

Explore and Build a Radar

As soon as you can build a radar. This will allow you to see more of the map and open it for exploration. Once you can explore you can attack and unlock gold, wood and medals. It costs gold to unlock parts of the map, but there is always more gold in those locations.

Use the Boom Beach radar to open up more of the world.

Look for an opportunity to upgrade the radar to expand your exploration. Be smart and find a way to do this after you’ve unlocked about half of the map with level one Radar so you aren’t stuck waiting around later. Tap on a building to see the upgrade options and price.

Scout Before an Attack

It is tempting to rush into an attack, but if you don’t know what it looks like you may end up losing troops and wasting time and resources. Use the free scout option to see if you can take an island before wasting gold with an attack that fails or that you need to retreat from.

Building new riflemen is easy, quick and cheap, but the heavy gunners take more time, use them wisely. Eventually you will be able to direct the gunners with flares.

Attack the Base and Avoid Guns

Once you can direct your troops attack smartly to save lives resources and time. There are many times when you can direct the troops to take on a single gun, go around the enemy and out of the range of other weapons and take out the headquarters to win the battle. 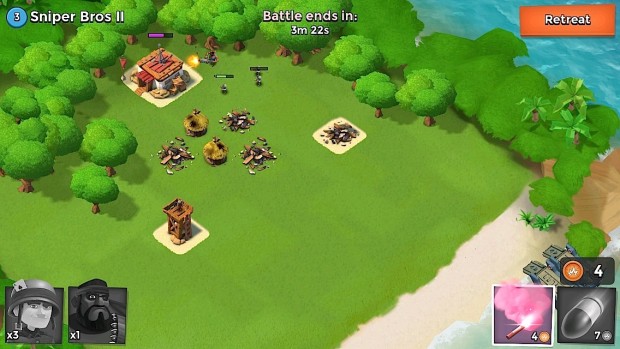 There are two ways to get free Boom Beach diamonds. They both take some time and in-game resources, but they are better than paying for them with real money. 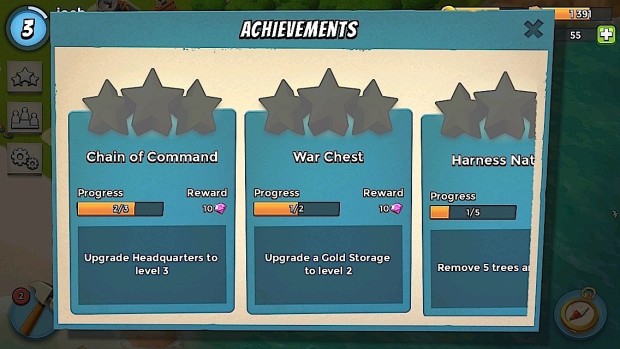 Here’s how to get free Boom Beach diamonds.

Tap on the three star icon in the upper left to see achievements. Unlocking these will earn free Boom Beach diamonds.

The next way is to explore the map. Eventually you will come across a chest of free Boom Beach diamonds that will help you get to the fun parts faster.

When you start playing Boom Beach you don’t need to worry about attacks, but eventually other computer characters and players will attack you. 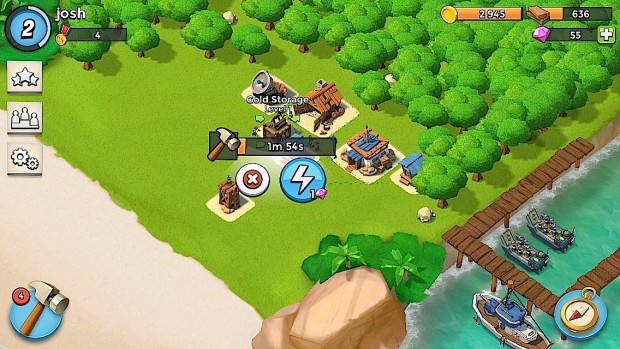 A good defense is key in Boom Beach.

Start with a defense that covers the perimeter, but soon you will need to cover the center of your base so it is not left open to attackers that rush past a sniper tower.

Look at the islands you defeat and learn from their weaknesses. Multiple layers of defense with various types of weapons will serve gamers best.

You Can Move Buildings Later

Unlike traditional strategy games it is possible to move buildings later. This means as the base grows you can reorganize to keep the headquarters and other resources protected without spending gold and wood on doubling up.

Tap on a building and then drag to move it around on the map.

When possible upgrade the gunboats and landing crafts. Doing this will allow them to carry more troops or fire faster or more often. This makes attacking tougher islands easier and you’ll lose fewer troops. 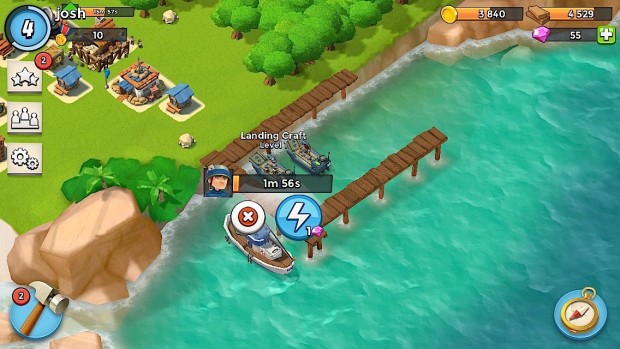 Upgrade your offense for a better fight.

Upgrading the gunboat takes away from building a new structure, but it is worth it. Same goes for the landing crafts.

Attack Ammo Regenerates so Use it

When you attack an island blowing up some buildings will give you more ammo for the gunboat. You can use this as a flare to direct troops or as artillery to destroy things.

If you get it, use it. The new ammo does not carry over to the next attack. Just make sure you use it wisely or you will run out too fast.

At first a vault seems like an unnecessary expense, but once your base comes under attack you’ll regret not building a vault. Once you build the vault keep at it to upgrade the vault for more protection.

The better the vault, the more gold, lumber and supplies you will have available after losing an attack on your base. And you’ll need it to rebuild and prepare for other assaults.