Gamers who want access to the best weapons, perks and specialists need to grind during the short Call of Duty: Black Ops 3 beta so these Black Ops 3 tips and tricks will help you make the most out of that grinding to level up faster.

Leveling up in the Black Ops 3 beta unlocks new perks, new abilities and weapons upgrades. This will also let you unlock new specialists. There is no exoskeleton like in Advanced Warfare, but perks can help upgrade your force and new specialists include special abilities that will afford you major weapon upgrades or new movement options. 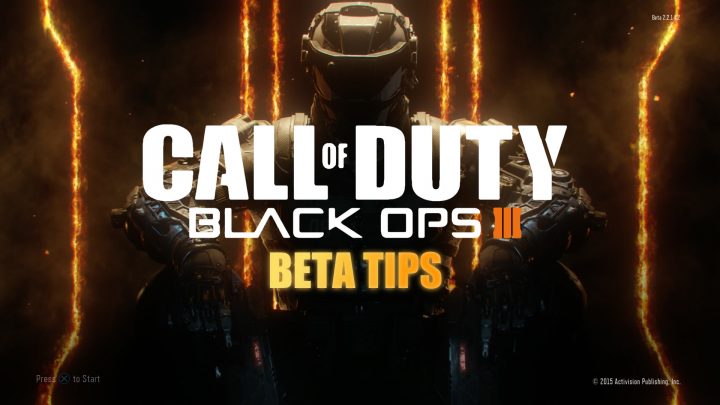 Use these Call of Duty: Black Ops 3 beta tips to level up faster before it ends.

Check out these essential Call of Duty: Black Ops 3 beta tips and tricks to level up faster in Black Ops 3. There’s no need for Black Ops 3 hacks or cheats, just smart play and a bit of guidance. You can use these on the PS4 now and on the PC and Xbox One soon.

You start the Black Ops 3 beta with one unlock token to choose a specialist. You will earn more each time you rank up your player. You can use these on specialists, perks and weapons. Think and plan out your upgrades by prioritizing what you need. In many cases you should focus on leveling up your guns and using unlock tokens on perks or a different specialist instead of spending them on more and more guns.

Level Up Guns As Fast as Possible

Pick a weapon and use it as much as possible. When you get enough kills with a weapon you will unlock attachments that make your gun better. If you wonder why other people shoot faster or kill you so easily, it might be because they have an upgraded version of your weapon.

Don’t forget to use the Black Ops 3 pistol. As Drift0r explains in the video above, the pistol is very powerful and when you unlock upgrades for it the power intensifies. If you are in a gun fight and run out of ammo switching to your pistol is faster than reloading. It is also a great weapon to carry when you have another short-range gun in your loadout.

Another Black Ops 3 beta tip to level up your weapons and your player faster is to play the right game modes. This means playing  Hardpoint, Domination or Confirmed Kill to get the most XP and funnel opponents into a small kill zone and combine opportunities for objective XP as well.

The perks will help you become a better player by giving you better situational awareness, stealth and faster weapon switching. You can use your unlock tokens to get more perks and to gain an advantage on the battlefield. Spend some time looking at loadouts in the create a class section and find the next perk you need.

Use Tactical and Lethal Grenades

Unless you remove one of the items from your loadout for a class you start with tactical and lethal grenades. The tactical flashbang grenades are great at disorienting opponents. Toss one into a room to clear it before you charge in to take a hardpoint.

How to Shoot Better in Black Ops 3

Watch the video to see how you can shoot better and upgrade your gun skills. This is what you will need to be a better player and avoid an embarrassing round of matches. There is a lot of flinch, so if you are hit first you are at a disadvantage. Watch out for jumping too often with thrust, because you show up on radar and you are a floating target.

Pick the right gun for you. Instead of choosing the most powerful gun, choose one that allows you to get more kills. This changes based on skill level, play style and attachments. If you think you are about to run into an enemy don’t sprint as you will take longer to pull your gun up and fight. Watch the video above from Ask VeLL for more great tips and gameplay.