This is how you fix Call of Duty: Modern Warfare problems on Xbox One, PS4 or PC so that you can get into playing without waiting for Activision or Infinity Ward to deliver another update or fix a problem. There are many known issues and Activision is working on updates to fix some of these issues.

Additional items that Infinity Ward is working to fix include,

Infinity Ward is working on more updates for Modern Warfare. Specifically, they are looking to fix the crashes on Xbox One, PS4 and PC. On Reddit, the Infinity Ward Senior Communications Manager shares a little about this process.  She also says, “We have a few updates going out over the next few days. I don’t want to give an exact time and date as we’re wrapping up testing on a few more things.”

As you can see in the video above, there are some maps where certain spawns have a major advantage over the other side, almost to the point of game breaking.

We’ll show you how to fix Call of Duty: Modern Warfare problems that can stop you from joining a party with your friends, starting on ranking up through the new Officer Ranks system and enjoying the single-player campaign so that you can focus on enjoying Modern Warfare.

How to Fix Slow Call of Duty: Modern Warfare Downloads

The first thing you can try is pausing the download on your system, waiting a few seconds and restarting it. You can also try restarting your console and even restarting your router and modem if speeds are slow on other devices in your house. Here’s how long the Modern Warfare download takes. 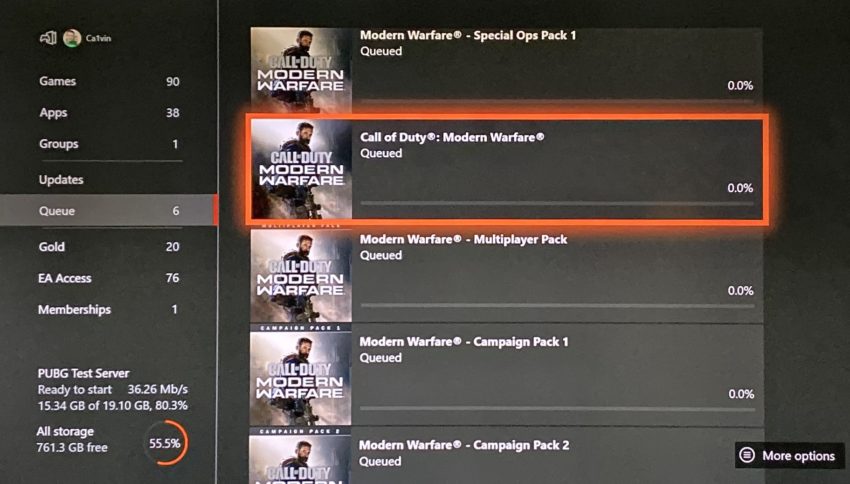 On the PS4 go to the Downloads section. Pause the download and wait 5-10 seconds. Now resume the download. This fixes many slow download issues very quickly.

Xbox One players can go to My Games & Apps, highlight the Queue and then press the controller button with three lines and choose pause installation. Wait 5-10 seconds and then resume the installation and download.

On PC, you may need to pause the download in Battle.net, restart the app or restart your computer to speed up downloads.

If you have an ethernet cable, run that to your device and plugin for faster than over WiFi connections. You can also avoid playing other games while Modern Warfare downloads. Microsoft says, “To provide the best gaming experience, background downloads are constrained while a game is running. To remove download constraints from games or apps being installed, you can either wait for the Xbox One to suspend the running game, or you can force games to close ”

How to Fix Call of Duty: Modern Warfare Installation Problems 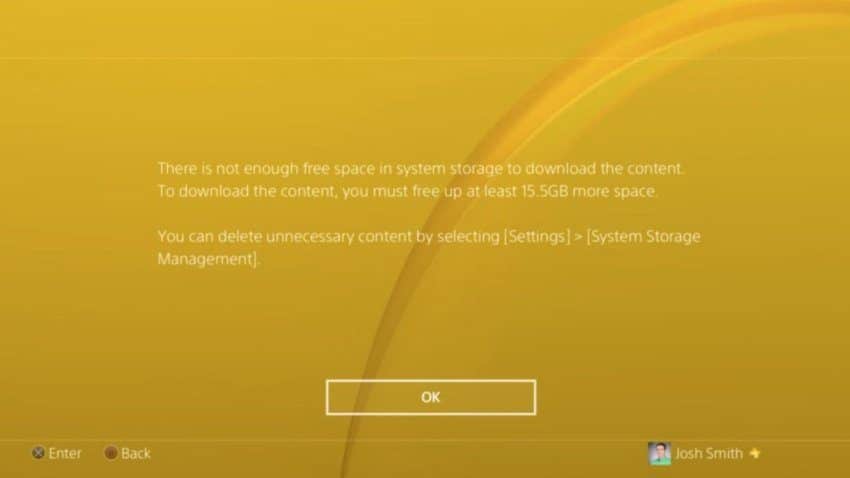 Three common Call of Duty: Modern Warfare installation problems are not having enough space, a frozen install and not seeing the pre-load option. This is a large game, so you will likely need a lot of space to download and them some additional space to install it.

You need to clean up space on your device by deleting old games, or you should invest in an external drive for your system. You can pick up a 4TB drive on Amazon for under $100.

If your Call of Duty: Modern Warfare installation is frozen, use this guide on how to get it started again. It takes a little bit, but you’ll need to do it to start playing.

Some users are seeing problems with not being able to play modes and seeing an error saying they don’t own the content or the content is missing. If this happens, you need to go to the store on Xbox or PS4 and look for the rest of the packs for Modern Warfare.

Select these packs and then download the rest of the game. This may take a while, but it will solve the problem. To complete this, restart the console and then you should be able to play.

On the Xbox One, some users will see the Modern Warfare Dev Error 6144. This happens when the game attempts to join a match in progress. This is a known issue, that they are working on fixing, but if you see this, you can get back to playing quickly.

Activision recommends backing out of multiplayer and starting again.

On PC, you may see one of the following error codes; 6065, 6066 or 6068. This is causing freezing or hanging and a GPU crash. They are fixing this in an upcoming patch, but you can get around it by running VRAM under maximum or running the game with default settings.

On all systems, you may see the Memory error 21 1749 which happens when you play multiple matches of Ground War in a row. If you see this more than once, you need to restart the game.

How to Fix Call of Duty: Modern Warfare PC Problems

Some other fixes for PC Modern Warfare problems include;

If you can’t install Call of Duty: Modern Warfare on PC, you may need to choose a different drive and manually make a folder to install the game to. Switching the drive fixed the problem for one user.

If you didn’t get your Call of Duty: Modern Warfare pre-order bonuses for Black Ops, you need to make sure that you entered your code and redeemed it. If you didn’t do this, you won’t get the items.

Here’s a full look at the pre-order bonuses and what to do if you are missing your code or there is a problem.

How to Fix Call of Duty: Modern Warfare Connection Problems

How to fix Call of Duty: Modern Warfare connection problems.

In cases where the servers are online and you cannot play, check with your online services like Xbox Live or PSN using the links below.

If you still have issues, you should try to restart your router and possibly your modem. You may also want to try a wired connection to solve some issues. If you cannot plugin, you may need to upgrade to a better wireless router like the Netgear Orbi or look at a whole home wifi system. Another thing to try is exiting the game and looking for a new lobby to join. Sometimes this is enough to get you into a game that works.

You can also change settings on your console and router based on which gaming system you are using. Here are more detailed guides;

You may also have issues if you don’t haven open NAT. You can use these guides to fix NAT issues on Xbox One. And you can use this guide to fix PS4 NAT problems.

Other steps you can take include making sue UPnP is turned on in your Router settings. You can also check into Port Forwarding using this guide more from Activision

If that fails, you may need to turn off port forwarding and then assign your PS4 or Xbox One’s static IP to your router’s DMZ. Activision says that once you test it, you should remove it from the DMZ. If you are on a college campus, you may need to contact your local network administrator as they may be locking down some of the ports needed to play online.

How to Fix Call of Duty: Modern Warfare Lag

If you experience Modern Warfare lag, there are some things you can do about it. If lag is too bad, you might not be able to play and when it is minor, you may lose gunfights. There are three indicators of lag in a Call of Duty game;

There are several things you can do to fix Modern Warfare lag on your own. the best thing to try is switching to a wired connection. You can buy a long ethernet cable on Amazon fairly cheap and even installing in your wall if you own your home is pretty easy.

You can also check your router settings. Log into your router. This varies by model, and look for any Quality of Service settings. Once in this area, look for PSN, Xbox Live or a Battle.net option. Many routers include these services with an easy to turn on setting that prioritizes them over other things on your network.

Perform a speed test to see if you are getting a fast enough connection with a low ping. This will let you see if you need to talk to your ISP for help in speeding up your connection.

How to Fix Call of Duty: Modern Warfare Crashes & Freezing

If Call of Duty: Modern Warfare crashes or freezes, you may see the error code CE-34878-0 on PS4 or you may see a random string of letters and numbers. There are some things you should try.

If this issue is widespread, you will likely see a hotfix, patch or update arrive quickly.

If you are on PC and you can’t open the Graphics menu, you need to delete the local config file on your PC. To do this, open Documents, Open the Call of Duty: Modern Warfare folder and then delete the Players menu. 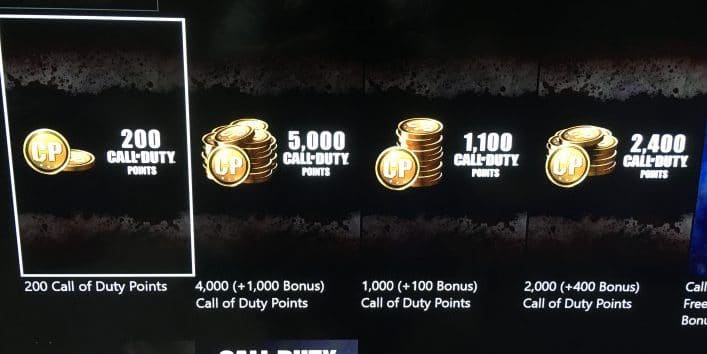 Missing Call of Duty Points in Modern Warfare? They just aren’t live yet.

Activision has not activated these yet. They will turn on Modern Warfare COD Points at a later time. While they didn’t mention a specific date, expect these to go live near the Battle Pass release later this year.

How to Fix Call of Duty: Modern Warfare Account Problems

With Call of Duty: Modern Warfare, you need to log into your Activision /Call of Duty account in addition to your Xbox Live or PSN account. This is how you will cross-play with players on other systems.

You need to log in with your email address and password for Activision. If you have a problem, you may need to break out your phone or laptop and reset the password so that you can login.

You can change your Activision display name online, and you should be able to do this in the game. Some users report not being able to save. If you run into this problem, you should close the tab, log back in and try again.

Upgrade your gaming setup with a SecretLab Titan gaming chair.